8 Reasons to Buy Heritage Pork Despite the Higher Price Tag

Win over market customers to your pasture-raised heritage pork with these benefits that easily outweigh conventional pork. 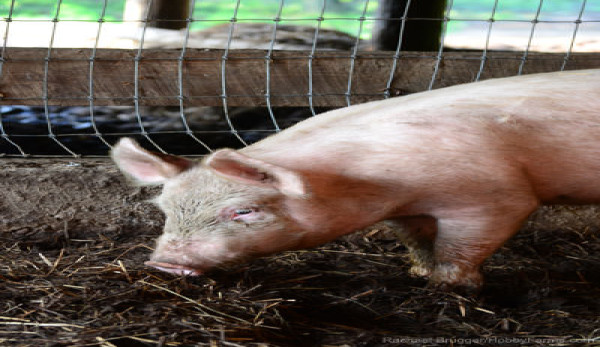 Farmers who raiseÂ heritage hogs know their pork is the best in the land, but taking your meat to market can put you up against a firing range of skeptics.Â Farmersâ€™ market customers who havenâ€™t been schooled in the benefits of buying heritage pork might scoff at the higher price of pork you charge, but that doesnâ€™t mean you canâ€™t still gain their business. With a little persistence and education, you can change their minds and earn life-long customers. Gear up for your next market with these eight talking points.

1. Humanely Raised Hogs
Let your customers know that yourÂ heritage pork is raised on pasture under humane conditions, unlike conventional pork marketed through mainline retailers. Nearly all commercial pork is raised in large, confinement settings known as CAFOs (concentrated animal feeding operations). A large CAFO building holds up to 2,500 sows or 10,000 market hogs, according to the Environmental Protection Agency.

Once impregnated, CAFO sows are locked in narrow metal gestation crates on unbedded cement floors, where they canâ€™t walk or turn around. Near the end of their nearly four-month pregnancies, theyâ€™re moved to equally tiny farrowing crates, where they give birth and nurse their piglets. When their pigs are weaned, theyâ€™re bred again and the cycle continues. Most CAFO sows never see the sun or breathe fresh air until they go to slaughter. Contrast this with conditions on a heritage-hog farm, where pregnant sows roam at will, build roomy nests for their piglets and then raise them in family groups. Sows and growing pigs root, graze, and enjoy the sun and fresh air daily. They lead healthy, happy lives because they are able to engage in natural pig behaviors.

2. Environmental Sustainability
Pasture-raised heritage pork is better for the environment. Hog CAFOs generate astounding amounts of urine and manureâ€”up to 300 million tons nationwide, according to the Union of Concerned Scientists. That isÂ twice as much as produced collectivelyÂ by humansÂ in the U.S.Â Operators often store the waste in cheap, ineffective “lagoons,â€ť open-air pits lined with clay or geo-membrane plastic. The lagoons can be smelled miles away and sometimes leak or spill over, contaminating groundwater when they do. Hogs on pasture deposit waste outdoors across larger areas, where it nourishes the soil and doesnâ€™t contaminate water supplies.

3. Fewer to No Antibiotics
Pork raised by conscientious producers, like heritageÂ hog farmers, is healthier than pork raised on confinement farms. Hogs on CAFOs are routinely fed and injected with antibiotics, even when they arenâ€™t sick. According to the UCS, 70 percent of the antibiotics and related drugs sold in the United States are used in agricultural settings, particularly CAFOs. Some are used to keep animals healthy in stressful, overcrowded conditions, while others are used to boost feed efficiency.

Indiscriminate use of antibiotics causes harmful bacteria to become resistant to drugs, like vancomycin, used for treating certain life-threatening infections in humans. Now synercid, a drug used to treat vancomycin-resistant infections, is threatened because of the use of virginiamycin as aÂ growth promoter in hogs and chickens. If this behavior of overuse continues, we will run out of effective antibiotics to treat livestock diseases.

5. Agricultural Diversity
Consumers who buy heritage pork contribute to the preservation of agricultural diversity. Most of the pork produced in the United States comes from four breeds genetically selected to mature quickly and perform well in confinement conditions: Landraces, Hampshires, Yorkshires and Durocs. Should these breeds fail to thrive, Americaâ€™s supply of pork could be severely threatened. That wonâ€™t happen if hardy, heritage breeds are available to take up the slack.

6. Healthy Pork
Pasture-raised heritage pork is more nutritious than supermarket pork. According to a study published in 2011 in the British Journal of Nutrition, people who ate moderate amounts of grassfed meat for as little as four weeks had healthier levels of essential fatty acids. When participants of the study who were in good health ate grassfed meat, their blood levels of “goodâ€ť omega-3 fatty acids increased and their levels of “badâ€ť omega-6 fatty acids decreased. Pork from pastured hogs is also higher in conjugated linoleic acid (a “goodâ€ť fatty acid that helps lower cholesterol and triglycerides), beta carotene and vitamin E, according to a 2009 study at Clemson University.

7. High-quality Lard
Conventionally raised hogs are bred for lean carcasses, but fat (aka lard) is what makes heritage pork sing. Heritage pork is marbled with fats that help a human body stay healthy and strong, thanks to beneficial fatty acids (mentioned above) that lower cholesterol. It is also high in vitamin D and void of harmful trans-fats, according to Wayne Martin, alternative livestock specialist at the University of Minnesota Extension. Some heritage breeds, like Mulefoot, Mangalitsa,Â Choctaw and Guinea Hogs, were developed as extra-fatty lard hogs. Ask your great-grandma what the old-time pastry makerâ€™s secret ingredient is, and sheâ€™ll say lard every time.

8. Better Taste
Best of all, pasture-raised heritage pork tastes infinitely more complex than plastic-wrapped supermarket pork. Commercial pork is pale, dry and bland, while heritage pork comes in an array of textures and flavors. If your customers want extra-lean pork with just a touch of inter-marbled fat, sell them meat from Tamworths or non-commercial Duroc hogs. If theyâ€™d prefer lean meat with a bit more marbling, pork from non-commercialÂ Hampshires and Yorkshires or from Chester Whites, Spotteds and Poland Chinas fill the bill. When they crave well-marbled, juicy meat, suggest Berkshire, Large Black,Â Gloucestershire Old Spots or pork from lard-breed hogs. When buyers arenâ€™t sure what they prefer, hand out samples. Take a booth to county fairs and farm expos in your area. Distribute heritage pork on a toothpick or a cracker. When people taste it, theyâ€™ll be hooked.