8 Things You Need To Keep Out Of The Chicken Coop

Things that belong in the chicken coop include chickens ... and not much else. Here are eight things that have no business being in your hens' quarters. 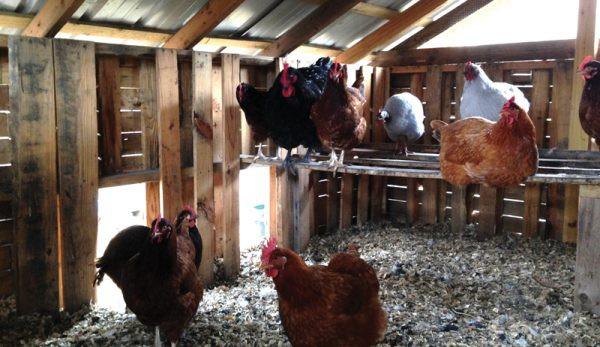 As a kid, it took me a while to understand which things didn‚Äôt belong in the house: muddy shoes, frogs, birds‚Äô nests, bicycles, etc. I‚Äôm still working on not bringing birds‚Äô nests and my bicycle into the house, but I clearly see the virtue of keeping certain things out. The same goes for the chicken coop: Not everything belongs in there.

I realize that some chicken-keepers are repurposing a shed as a coop, so it naturally has room for other things besides chickens. And there seems to be some kind of Murphy‚Äôs Law that stuff will fill the amount of space available.

But if you‚Äôre starting from scratch and building a chicken coop, my general advice is that the coop should only be big enough to function as the windproof and waterproof box that the chickens sleep in. Setting this as a goal means you will have a chicken coop that demands less time, materials and money to build. It‚Äôll also demand less of your time for maintenance.

And by keeping lots of things outside the chicken coop, you also save lots of time, money and hassle in other ways.

I almost never have to top up our chicken waterer. Every time it rains, it fills up from a short gutter and downspout mounted under the coop‚Äôs roof. In seven years of chicken-keeping, I‚Äôve only had to top it up for lack of rain maybe twice a year.

But if that kind of waterer were inside the chicken coop, there would be heck to pay. Chickens don‚Äôt like waterbeds or watery bedding either.

Putting the waterer inside the coop means you won‚Äôt be getting free water and more free time. Instead, you‚Äôll be like an overworked and underpaid waiter, topping up everyone‚Äôs water when you might rather be doing something else that doesn‚Äôt require putting on muck boots.

If you already have your waterer sitting in the chicken coop or you‚Äôre just getting started, here‚Äôs a shopping list from top to bottom:

Do a rain dance. Invite the chickens to dance, too. That can‚Äôt hurt.

I haven‚Äôt figured out a way for Mother Nature to keep the chicken feeder filled. I have to do that myself. But it takes less time and trouble to refill it when it‚Äôs in the pen/run rather than in the chicken coop.

And the feeder and waterer aren‚Äôt in the way when I need to clean out the coop either‚Äîbonus points!

Most chicken feeders have a tray or saucer that holds the food, leaving it susceptible to rain and vermin. A better way to feed them in the pen is to mount a 5-gallon bucket on one of the fence posts.

While you‚Äôre getting one bucket holder from the farm-supply store for the waterer, get a second one for the feeder. Then it‚Äôs just a matter of drilling a couple holes in the bottom of the bucket from which to suspend eyebolts.

Drill a hole in the end of a few champagne corks so you can screw one over the end of each eyebolt. (It‚Äôs good to have extras to replace old corks that fall apart over time.) Then hang the bucket in the holder, fill it with about 25 pounds of organic chicken feed pellets‚Äîthis system works best with pellets‚Äîand snap on the lid.

I only pinch the lid closed in two places: It makes it easier to remove but still keeps out rainwater.

If you have lots of chickens, you may want to use more than one feed bucket (ditto for waterers). You can also use bigger containers‚Äîsuch as storage totes resting on several cinderblocks‚Äîif you have a chicken population explosion.

Read more: How and why to build a DIY chicken vending machine feeder.

We installed an automatic coop door that lets us sleep in. But after I installed it, I saw that it had several thin wires exposed inside the chicken coop. I think most chickens would ignore them, but it‚Äôs difficult to second-guess which one will think the thin, colorful wires might be something edible.

So I scared up a scrap piece of plywood and cut it to fit. I screwed it into place to cover the wires so we don‚Äôt have any electrocutions or electrical fires.

Some people want their chickens to keep up egg production over the winter. If that isn‚Äôt an economic necessity for you, consider forgoing that option for several reasons.

Even at minus 30 or minus 40 degrees F, chickens will be fine in a coop that‚Äôs dry and blocks the wind. I mean, come on: They have down coats! And like many animals‚Äîbut not humans‚Äîthey don‚Äôt lose body heat from their feet.

Humans evolved in balmy Africa, so our extremities are focused on getting rid of excess heat from our feet, hands and head. But some animals‚Äîsuch as birds, cats and dogs‚Äîhave countercurrent circulation. Blood returning from cold extremities sucks the warmth from blood vessels coming from the heart and return that heat to the heart, so it isn‚Äôt lost.

Plus, you don‚Äôt want to be like the chicken keepers in Wheat Ridge, Colorado, whose heat lamps set three coops and houses on fire one winter a few years back causing more than $60,000 in property loss and 11 dead birds.

Read more: Here are some tips for keeping your chickens comfy in cold weather.

Pine shavings work great as bedding in the coop. Cedar shaving look pretty similar but should be avoided as they can cause respiratory problems.

Not every chicken exposed to cedar shavings will show any problems. But then, not every smoker gets cancer.

Would you rather have to put on muck boots every time you went to gather eggs? I didn‚Äôt think so. That‚Äôs just one reason to forgo putting the nest boxes inside the coop.

A couple other reasons: With the nest boxes inside the coop, they are more time-consuming to clean out and hens may roost on top of the boxes, creating one more surface to clean.

You‚Äôll save time and hassle by mounting your nest box on the outside wall of the coop.

Specifically on a wall that is outside of the pen. My wife, Chris, was so certain she wanted this that she also insisted on a flagstone path from the back door to the nest box. She can gather eggs while still in her slippers!

Yes, my advice is that henkeepers should stay out of the coop! The exceptions are if you‚Äôre leaning into it for cleaning or making some adjustments to the roosting bars or something.

This just goes back to what I said at the beginning: The coop should just be the box your chickens sleep in. There‚Äôs no real need for it to be bigger than that. Making it big enough for people just boosts the costs and maintenance.

So there are the eight things that should stay out of the coop. Now if I can just figure out a better place than the dining room for my bicycle.