8 Ways You Can Use and Love Burdock

Burdock is typically considered a garden weed, yet every part of the burdock plant (also called gobo root) can be used to keep you healthy. 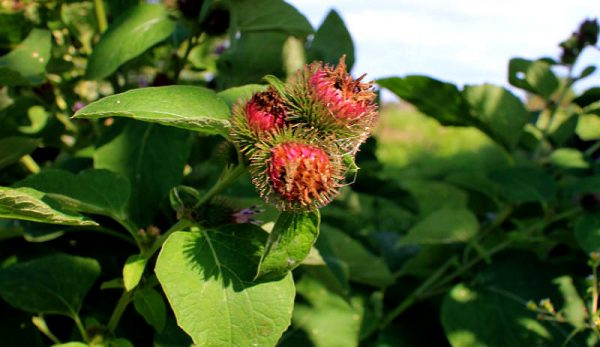 I recently wrote about burdock (Arctium lappa) and how beneficial it is for the soil. As I was doing so, I looked back over my posts as The Prescription Gardener. It seems like I mention burdock quite a lot but never really talked about why I like it so much. It seems Iãve been teasing my readers, so today that ends!

Burdock is well known for its burs. Some have likened them to natural Velcro for the way they zipper themselves to clothes, hair and fur. (They were actually the inspiration!) Itãs a rather effective way for the seeds to move themselves aboutãso successful, in fact, that burdock has naturalized itself all over the world. References to the use of burdock can be found in Europe, India, China, Japan and across North America. It is a fairly new import to our continent, showing up here in the early 17th century.

I grew up knowing burdock as a nuisance weed in vegetable and flower gardens around the house. It wasnãt too much of a stretch to learn that the root contained beneficial phytochemicals, but to hear that all parts of the plant are useful was a surprise.

I think we tend to use the burdock root more because itãs easier to collect. It must be collected in late-summer or early-fall of the first year. Burdock is a biennial and if it is allowed to overwinter, the root begins to rot from the inside out.

Burdock can be found on disturbed ground, in fields or on the edges of the wood. It is easy to spot this time of year so I challenge you to get out and get to know this amazing weed. Here are some of the many ways you can put it to use,

The burdock seeds must be harvested by breaking open the Velcro-like burs. A colleague of mine learned the hard way that you must be very careful collecting these seeds. The zipper mechanism on the seed head can be very dangerous to the eyes. If you wish to use burdock seed, it is best to put the burs in a burlap bag and pound them while they are safely contained, so the splintering plant matter canãt jump near your face.

The seed causes the same kind of tingling in the mouth when you chew them that you can get with Echinacea (Echinacea spp.) or spilanthes (Spilanthes acmella). All of these herbs have abilities to soothe a toothache and promote oral health wellness.

Due to the doctrine of signatures (which says that a plant that resembles a body part can be used to treat that body part), burdock seeds have long been thought to benefit the kidneys. The seed heads and seeds themselves were said to resemble stones in the kidneys and bladder, and we now know that burdock seeds actually do help in treating them.

Burdock seeds have also been used in country medicine for arthritis. This is logical in that we often use diuretics, which promote urine flow through the kidneys, to relieve the pain and inflammation of arthritic joints. Make sure to grind or process the seeds to remove the little sharp points, as theyãll cut your tongue and stick as you chew them.

Even burdockãs burs can be used medicinally. Infuse them in a tea to benefit the memory.

An old Amish friend told me that their community uses burdock leaves, bruised, on the back to ease pain. Nicolas Culpeper, a 17th century herbalist and physician, also suggested that, though there has been no real corroboration. Culpeper wrote that the leaves could be bruised and placed on tendons that are pulled too tightly and are causing pain.

In 17th century Europe, burdock leaves were applied topically in country medicine to treat burns and tumors. They are today known to be very good for itchy skin rashes, especially eczema, poison ivy and adult acne.

Where the seeds can be used to quickly stamp out an acute ailment, root medicine moves slowly with deep imbalances.

Burdock root aids in the digestion of fats and oils. Itãs served in French and Japanese cuisine as part of rich, dense recipes.

In western herbalism, we know the root best for its abilities as an alterative. Alteratives are herbs that favorably improve the condition of the blood. Throughout most of burdockãs written history, there is a running theme that the entire plant is important for its ability to support the health of the liver, the kidneys and the lymphatics and to heal conditions associated with the skin. The root is nearly specific for psoriasis and eczema.

Get to know more healing plants from HobbyFarms.com:

Dawn Combs lives in Ohio with her family and is the co-owner of the herbal health farm Mockingbird Meadows, chief soda jerk at her familyãs unique storefront apothecary called Soda Pharm and the master formulator of their herb- and honey-based products. Trained in ethnobotany, she travels across the country to speak about botanical wellness using functional foods and home health proficiency. She is the author of Conceiving Healthy Babies: An Herbal Guide to Support Preconception, Pregnancy and Lactation (New Society Publishers, 2014),Heal Local: 20 Essential Herbs for Do-it-Yourself Home Healthcare (New Society Publishers, 2015) and Sweet Remedies: Healing Herbal Honeys (Storey, 2019).