Baffled by a waning eggplant crop? Use these tips to help combat disease in your garden. 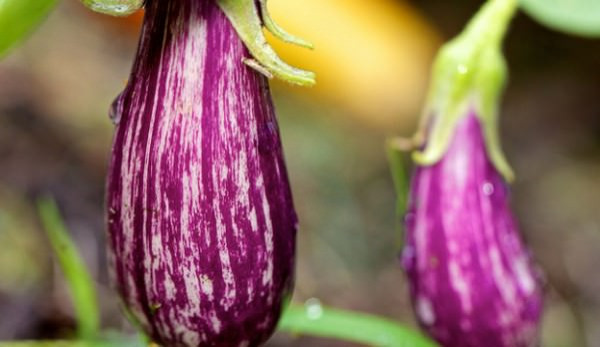 Eggplantsāmuch like their close cousins, tomatoesāare far tastier fresh out of the garden than purchased at the grocery store. Growing this amazing vegetable isn’t as complicated as you might think, though they do require warm temperatures, compost-rich soil, and regular watering for the greatest rate of success. Sadly, even when you give them everything they need, thereās a small chance that troubles may arise, often in the form of diseases.

A handful of bacterial and fungal diseases can strike your eggplant patch, causing blemished fruits, marred foliage, decreased production and sometimes plant death. Identifying and remedying these pathogens can be very challenging because many of them look alike. Your local cooperative extension service can recommend a plant pathology lab to confirm a specific diagnosis through a submitted sample. But regardless of which diseases might be waiting in the wings, when it comes to eggplants, an ounce of prevention is worth much more than a pound of cure.

To avoid fungal and bacterial diseases in the first place, be sure to rotate crops every year, give each plant plenty of space, remove all garden debris at the end of the growing season, avoid working in the garden when foliage is wet, choose varieties with proven disease resistance, and keep a close eye out for problems, especially during wet weather. Treatment with copper-based fungicides and/or bio-fungicides, such as Bacillius subtilis, might prove successful in battling some of these pathogens, but keep in mind that most of these diseases are best handled when symptoms are first spotted.

Plants affected by this bacteria disease are in big trouble. Although itās naturally found in tropical regions and greenhouses, the disease often arrives to the garden via purchased plants grown where the disease is present. Itās soil-borne but can be transmitted by soil, water, plant matter, and even on clothes and tools. Bacterial wilt attacks many common bedding plants and vegetables, including eggplants.

Initially only one or two leaves wilt during the day, while the remaining leaves appear healthy. As the infection spreads, more leaves wilt and yellow until the entire plant succumbs, despite the stem remaining upright. Lower stems might develop dark-brown splotches, and slimy, viscous ooze comes out of the stems when they are cut. If you take two freshly cut stems and hold the ends together for a few seconds, a thread of slime will connect them as they are separated. When cut stems are placed in water, milky streams of bacteria are seen streaming out of the cut.

Bacterial wilt can survive for long periods in the soil on roots and plant debris. Like many other diseases, it favors high temperatures and high humidity. Sadly, thereās no cure for this disease. Once confirmed, infected plants must be removed and discarded in the garbage. Keep them out of the compost pile.

This fungal disease affects the leaves and stems of eggplant; the fruit remains unaffected. The first sign of this disease are small, circular yellow lesions on the foliage. Eventually the lesions develop soft, gray fuzz at the center with a dark-brown ring around the exterior. Sometimes concentric rings appear, hence the disease nickname “frog eyes.” In severe infestations, defoliation can occur, and fruit size and production is greatly reduced.

Cercospora leaf spot survives the winter in plant debris, and when spring arrives, the spores are spread by wind, rain, people and animals. To keep spores off plants, mulch newly planted seedlings with straw or hay to prevent infected soil from splashing onto the leaves.

Young eggplant seedlings might succumb to damping off. Pythium species are the most common cause of this disease, resulting in dark, water-soaked lesions at the base of young seedlings or on developing leaves. Eventually, infected seedlings are girdled and fall over. These fungi can survive for long periods in soil, plant debris and weeds. Damping off is most severe when conditions are too wet or seedlings are overcrowded. Keep air circulating around seedlings and water from below whenever possible. Sterilize flats and pots before reusing them and remove any symptomatic seedlings to keep the disease from spreading.

Eggplant fruits affected by this fungus develop small, gray, water-soaked lesions, often starting at the bottom end of the fruit or at a site of injury. Eventually, the lesions grow in size and produce fuzzy-looking patches of spores. They can occur on both immature and mature fruits. Discard infected fruits as soon as you notice them, and use an organic fungicide to prevent the disease from spreading to other fruits.

Sometimes called ripe fruit rot, this fungal disease often remains symptomless until the fruit is ripe and ready to harvest. The disease starts out as small, sunken, gooey spots that eventually merge into larger blotches. When spore-set occurs a few days later, concentric circles cover the lesions and orange or pink jelly-like patches of spores can be found covering the lesions. Prevent fruit from touching the soil, and harvest before they become overly ripe. Remove infected plants from the garden and throw away, and plant with disease-free seed.

Fusarium wilt symptoms often begin with drooping leaf petioles. Sometimes a single branch may wilt before the rest of the plant. In eggplants, this wilting often starts with the lower leaves, quickly progressing up the plant until the whole thing collapses. The entire plant may be killed, often before it reaches maturity. If you cut the main stem of an infected plant, you can see dark streaks running lengthwise through the stem. You might see dark-brown, sunken cankers at the base of the plant.

The fusarium fungus survives in the soil for several years and is spread by equipment, water and plant debris. Like many other diseases, it favors warm soil and high moisture. If fusarium wilt has been a problem for you in the past, be sure to rotate crops and try growing in raised beds to promote good drainage.

Verticillium wilt is caused by a group of soil-borne pathogens that block the vascular system of the plant, causing it to wilt. Symptoms progress slowly in eggplants, often starting as a characteristic V-shaped lesion that develops on older leaf tips, eventually expanding to cover the entire leaf. As the disease progresses, the plant becomes chlorotic (i.e., doesnāt produce enough chlorophyll) and withers, eventually dying. Cutting through the main stem of the plant will reveal dark-brown discoloration inside.

Verticillium fungi can survive for many years in the soil and on plants. They prefer slightly cooler summer temperatures, between 70 and 80 degrees F. Because this organism resides in the soil, crop rotation and soil solarization are helpful in deterring it. Grafted eggplants are said to be more resistant.

This fungal disease can strike either the root or the shoot system of the plant. If it enters via the roots, they quickly turn brown, causing the plant to die. Stem and leaf infections start as dark green, water-soaked lesions that turn dark brown and expand. As the lesions age, they dry out. Infection can spread to the fruits, causing the same, distinct dark-green lesions that appear on the stems and leaves. Often the fruit shrivels but doesnāt drop from the plant.

This fungal disease can attack both seedlings and mature plants. In seedlings, it causes damping off at the soil level, while in mature plants, it can affect the entire plant, generating dark-brown stem lesions at or just below the soil line. Infected foliage yellows and eventually wilts. A distinct feature of southern blight is the fan-like webs of whitish fungal threads that develop around the rotted stems. Small, brown, hard, mustard seed-like masses (sclerotia) form in the “fans” of fungal threads. These masses overwinter in and around infected plant debris and can survive for many years. When conditions are right, the fungal mycelia within the sclerotia emerge and initiate a new infection. To help control southern blight in places where a previous infection has occurred, maintain a soil pH of 7 or above; the sclerotia are inhibited in slightly more alkaline conditions. Deep plowing is also effective.