9 Good Bugs And How They Help Your Garden

Keep your eyes peeled for these insects and spiders in your garden—they may be tiny but they’re doing big work. 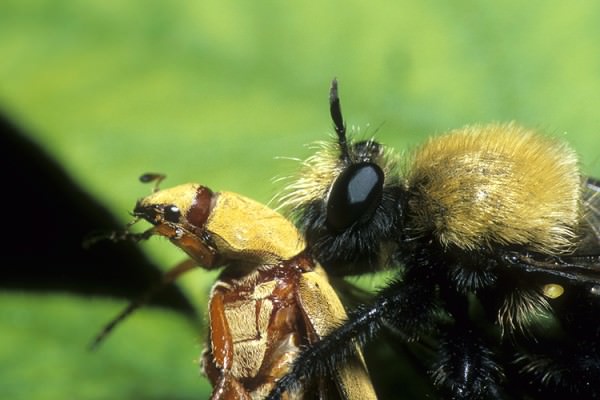 As you probably already know, your garden is a buffet of leaves, flowers, stems and roots for myriad hungry insects. No garden is safe from the ravages of millions of ravenous mouths that bombard them relentlessly. However, there is good news: You have allies to assist you in the war against these voracious appetites—other insects and spiders that make a living hunting the pests in your garden. Having a basic knowledge of these beneficial bugs is critical if they are to be used as allies.

Most people think of flies not as an ally but as dirty nuisances that make you sick after they land on your potato salad during a picnic. However, there are many predatory flies that prey on countless garden pests.

Robber flies (pictured above) are the aerial hunters of the insect world. With their acute vision and excellent maneuverable flight, they grab other insects out of mid-air and stab them with their piercing mouthparts. Most have very fuzzy “beards” to help protect their face when snatching prey and large spiny legs to help grasp prey while in flight. Many like to perch on the same leaf or twig to await their next victim. Some are convincing mimics of bumblebees.

Another convincing mimic is the hoverfly. They can be very credible wasp look-a-likes. These small flies are commonly found obtaining nectar from flowers, which aids in pollination. And everyone has seen them hovering perfectly in one spot only to quickly dart to another spot at the slightest movement of the observer. As larvae, some hoverflies specialize in devouring aphids.

Another pest-devouring group are the dragonflies and damselflies. Both have excellent eyesight and scoop up their prey when they fly by, forming a basket with their specially modified legs. They’re enowned for their mosquito-hunting ability, but I’ve also seen many a moth and leaf hopper dispatched in the powerful jaws of one of these amazing aerial hunters.

Commonly seen around outdoor lights at night, these delicate lime-green insects with clear wings are voracious predators of aphids. The larvae look like little green alligators with sickle-like mouthparts. They use these mouthparts to skewer their aphid prey and suck out the juices.

Ladybird beetles, also known as ladybugs, are also ferocious hunters of aphids. All insects that feed on aphids sometimes run into aphid bodyguards: ants that protect the aphids for the sweet honeydew they produce. The ants repel all predators, including ladybugs. However, ladybugs have a trick up their sleeves. The ladybug pupa has ridges along the back. If an ant touches the pupa with its antenna, the pupa will snap the ridges closed and pinch the ant’s antenna.

Another very effective predator that targets pests in your garden are assassin bugs. Some have long spindly legs and a long, beak-like snout that they use to pierce their prey and suck out its juices. They have powerful saliva that acts as a poison and quickly subdues even large dangerous prey, such as grasshoppers.

Female ichneumon wasps typically have a long (sometimes very long) ovipositor at the tip of their abdomen. The ovipositor is a stinger-like appendage that is actually used as an egg-laying device. Ichneumons specialize in finding their prey by using visual cues and chemical detection with their antenna and even the tip of their ovipositor. When the female has received all of the correct cues, she will lay an egg through the ovipositor and into the host where the egg will hatch into a larvae and consume the host.

The webs produced by orb weaver spiders are some of nature’s most artistic. Most orb weavers construct their web at dusk and take them down at dawn. Orb webs capture flying insects, such as beetles, moths and other garden-munching pests.

Cobweb spiders build messy-looking snares that capture a wide range of crawling pests. All of these web builders can be found throughout all parts of your garden from the roots up to the top of the tallest plants.

Hunting spiders include jumping spiders, wolf spiders and crab spiders. These spiders do not use silk to make webs to capture prey.

Jumping spiders are day-loving, large-eyed predators that actively hunt for prey. Most are less than 1/2 inch and will peer up at you when you get down to their level to look at them. These spiders are ferocious hunters of small insects. If they were the size of cocker spaniels, I’d be afraid to go outside.

Wolf spiders typically hunt at night. Female wolf spiders are sometimes found carrying their egg sack around attached to their spinnerets. When the baby wolf spiders hatch, they climb up on their mother’s back and are carried around for a while. Wolf spiders chase down and pounce on their prey.

Crab spiders, on the other hand, wait patiently for prey to come to them. Some wait on the surface of leaves while others lurk in flowers. Once a tasty morsel comes close, the crab spider seizes it with lightening speed and dispatches it with its fangs.

Crab spiders, along with all of the other critters mentioned in this article are working night and day to help control the multitude of hungry mouths wanting to ravage your garden. With just a basic knowledge and understanding of these amazing animals, you too can enlist the help of these remarkable allies.

Based out of central Oklahoma, Bryan E. Reynolds is a professional nature and wildlife photographer and writer whose work is regularly published in a wide variety of media including magazines, books, field guides, museum/nature centers, and calendars.