9 Great Mushrooms to Grow for Market

Enter the world of farming fungi by cultivating one of these popular mushroom types. 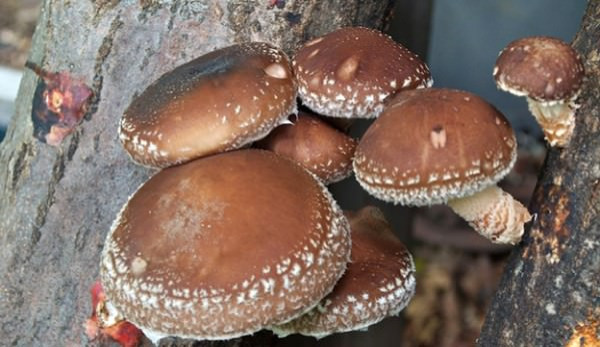 No matter if you farm 1/2 acre in the city or 100 acres in the countryside, thereâ€™s a mushroom suitable for growing for market. Although some mushrooms require specific humidity and temperature conditions to propagate, many mushrooms can be grown indoors or out, with as little or as much attention as you would like to give to them.

If youâ€™ve never grown mushrooms before, no problem. Itâ€™s not difficult. Most mushroomsâ€”especially those grown outside on logs and in mulchâ€”require little or no expertise, just some time and the right conditions. Look through this list, find a favorite and get some mushrooms going today. Your market customers will thank you.

Shiitakes (pictured above) might be the most popular, most recognizable and most classic of gourmet mushrooms, but most importantly, these mushrooms are easy to grow. They can be propagated indoors or out, on pasteurized wood chips or hardwood logs respectively, and yield very well. According to mushroom spawn purveyor Field to Forest, “A 40-inch long log will typically yield 2 to 4 pounds of mushrooms total over many seasons.” In general, shiitakes fruit after a good rain or soaking, when temperatures range between 45 and 85 degrees F, depending on the strain you choose to grow. They require partial shade, so for outdoor production, keep logs under trees, under a porch, on the northside of your house or in a shaded greenhouseâ€”somewhere they can get regular rainfall and stay moist, but not somewhere too bright. Shiitakes are available as spawn or in ready-to-fruit blocks from certain mushroom purveyors. Expect at least two fruitings per year.

Available in a veritable rainbow of colors, oyster mushrooms are an easy, fun and productive mushroom for any skill level. Moreover, few mushrooms can outcompete the oyster in terms of yield. Depending on your substrateâ€”that is, what you choose to grow them onâ€”oysters can start producing in as few as eight weeks. In fact, as Tradd Cotter writes in his must-have mushroom book Organic Mushroom Farming and Mycoremediation (Chelsea Green, 2014), oyster mushrooms produce twice as much protein as free-range chickens over the course of two weeks.

These prolific mushrooms can be grown on soft woods, like poplar, willow and aspen, or on pasteurized straw. They can also be propagated on cardboard and coffee grounds, making them one of the most affordable and adaptable mushrooms to produce. Grow them in your woods, in an outbuilding or in a closet. And not that they need more praise, but when many cultivated mushrooms take the hot summer months off, the oyster is in its element. Because they are easy to cultivate indoors and out and do well in warm weather, oysters are an excellent mushroom to year-round.

Oysters are available as spawn or in ready-to-fruit blocks from certain purveyors. Expect at least two fruitings per year, but many more are possible depending on your management.

Also known as “Hen of the Woods” for its slightâ€”but deliciousâ€”roast-chicken flavor, the maitake mushroom is a smart mushroom to grow. Although itâ€™s a bit finicky and can take up to two years to start fruiting, this mushroom can bring a fairly good price at market, especially from the cooks and chefs who know it well.

These mushrooms can be grown indoors or wild-harvest, but propagating on outdoor logs is the easiest production method. The logs should be fresh, pasteurized in a pressure cooker, then inoculated with spawn purchased from a reputable source, such as Field to Forest Products, Mushroom Mountain or The Mushroom People. After six months, the logs should then be buried. This is a cool-weather fruiter, preferring cellar temperatures (55 to 65 degrees F). Expect one fruiting per year.

A chef favorite, the Lion’s Mane mushroom, as well as its cousin the Comb Tooth, is capable of being grown indoors or out with the right conditions. Although grown typically on hardwoods, like oak or maple, each commercial variety of Lion’s Mane has its own preferences, and the guidelines provided by the purveyor should be followed for best results. That being said, once you get a fruiting itâ€™s possible to cut the mushroom when half-developedâ€”before producing spinesâ€”and get a regeneration, which will turn into a second, similarly-sized mushroom in a week. In other words, your work and patience will be generously rewarded.

Generally preferring a fruiting temperature of around 55 to 65 degrees F, Lion’s Mane tends to be a good spring or fall mushroom. This mushroom is available as spawn or in ready-to-fruit blocks from certain purveyors. Expect one fruiting a year.

Related to the button and portobello mushrooms, this warm-weather mushroom can be grown in small beds of mature compost and is easily identified when it starts to fruit, which is essential for any mushroom grown in compost or mulch. The brown cap, and almond color make it unique to mushrooms that typically grow in compost or straw. Although its cousins theÂ portobello, button and crimini (second flush of theÂ portobello) can also be cultivated for market, on a beginner scale, the almondÂ portobelloÂ is the more user-friendly of the family. All that is required is a little mature compost, some mulch, the spawn and warm summer months. Expect several flushes over the summer.

Also known as the King Stropharia and Garden Giant, this mushroom is a favorite of no-till gardeners everywhere. The spawn is generally spread in the springtime over mulched garden areas or around mulched shrubs and trees, then harvested throughout the later summer months. Notably, growing mushrooms in gardens has been said to increase yields, and thus allows the fungi to work not only as companion plants but intercrops, as well.

The Wine Capâ€™s elegant, maroon cap and veil make it relatively easy to identify when it starts to fruitâ€”a very important quality for the beginning mushroom growerâ€”and its flavor renders it an excellent market addition. Expect several flushes throughout the warmer months.

This beautiful polypore mushroom may take a little extra work finding a market, but it sells for a good price and is highly sought by certain people for its medicinal properties. Grown on a large variety of hardwoods, these mushrooms will not fruit above ground but work well in beds of partially buried logs. Youâ€™ll need to be able to inoculate hardwood logs and let them sit for several months before burying them partially so fruiting can occur. They can also be propagated on sawdust indoors with relative ease for those who can easily control the fruiting environment. Because this is a semi-tropical mushroom, it enjoys high humidity and warm weather, fruiting in the late summer months when temperatures are around 60 to 95 degrees F, making it a great mushroom for the southeastern U.S. Notably, the reishi mushroom may take several weeks to developâ€”up to 12 in some casesâ€”but it can be harvested at any stage of growth. Reishi are available as spawn or in ready-to-fruit blocks from certain purveyors. Expect at least one flush per year.

8 and 9. Chanterelles and Morels

I want to be clear here, there isnâ€™t a consistent way to propagate these mushroomsâ€”yetâ€”but there are ways to encourage them. Both of these fungi require a specific set of plants to fruit and grow. And each species of each mushroom has its own desires. Knowing those desires, however, is difficult and may be impossible.

One easy way to encourage chanterelles (summer fruiter) and morels (spring fruiter) is to sacrifice some of your older, less-desirable mushroom finds to a bucketful of water. Add a pinch of salt and let it sit for a day. Then spread that slurry around an area that resembles where you originally found those mushrooms, typically around hardwoods. This encourages the spores to “germinate” then places them back into the ground to propagate. In Mycellium Running (Ten Speed Press, 2005), mycologist Paul Stamets describes this as “just a variation of what happens when it rains.”

For morels, Stamets also describes spreading morel spawn over the ashes of a fire pit or bonfire, then covering it with some debris and shade cloth to encourage them. Others make and freeze the water and salt “slurry” with their morels, which they then pour over a shaded trench full of wood chips in the spring to encourage fruit for the next year.