Yesterday Uzzi and I got to eat the Christmas tree. Yum! 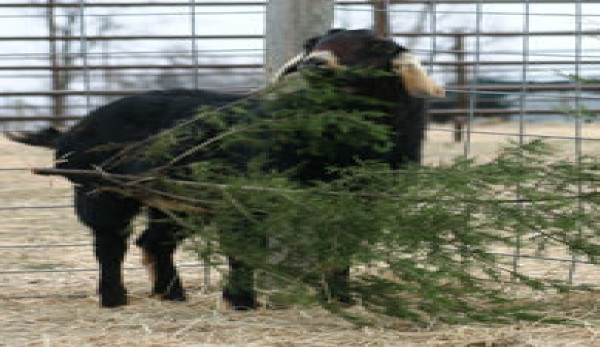 Yesterday Uzzi and I got to eat the Christmas tree. Yum! While we were munching, we heard Mom say it‚Äôs almost time for the New Year to begin.

Uzzi and I asked Mom what we can do to celebrate. She says to make New Year‚Äôs resolutions‚Äîlike resolving not to pee in my face when I‚Äôm in rut. Uzzi sniggered. That resolution wouldn‚Äôt be much fun.

So, when Mom and Dad went to bed, we crept to the house and booted up the computer to see what New Year is all about.

We visited our favorite information site,¬ÝWikipedia. This is what we learned.

In ancient¬ÝRome, the New Year was celebrated around March 1, but in 1582, along came the Gregorian calendar¬Ý(that‚Äôs the one we use today) and now New Year falls on January 1.

But our New Year isn‚Äôt the only one humans celebrate around the world. For instance,¬ÝChinese New Year falls on February 14 this year;¬ÝRosh Hashanah (Jewish New Year) will be on September 9 and 10; and the Islamic New Year¬Ýisn‚Äôt until next December 7.

The ancient Celts called what we call Halloween,¬ÝSamhain. Some historians say Samhain was their New Year, others say that New Year fell on¬ÝYule. Lots of other¬Ýcalendars are used around the world. You can read about them at Wikipedia (Uzzi and I learn lots of new things when we visit!)

Here in America, humans celebrate New Year‚Äôs Eve by having parties, but in other places, fireworks are the norm. Uzzi and I don‚Äôt like fireworks (our neighbors shoot them off at the Fourth of July), so we think a party with paper hats and treats to eat is the way to go. Hey, maybe my Internet girlfriends, Isis, Anat and Faith could come!

But first, those pesky New Year‚Äôs resolutions. Uzzi and I don‚Äôt know what to write down. Mom says she resolves to spend more time training us goats and the sheep-geep,¬ÝMopple, this year. Yay! She also wants to write at least two new books.

Dad resolves to finish the cabin this year. Ursula the sheep says she‚Äôs going to trot around the pasture every day, eat less and lose 10 pounds. Carlotta resolves not to root up the yard if she gets out of her pen. Jadzia resolves not to stick her head in hay bale plastic mesh.