A study aims to determine if naked oats used in the diets of organic chickens could help improve production efficiency. 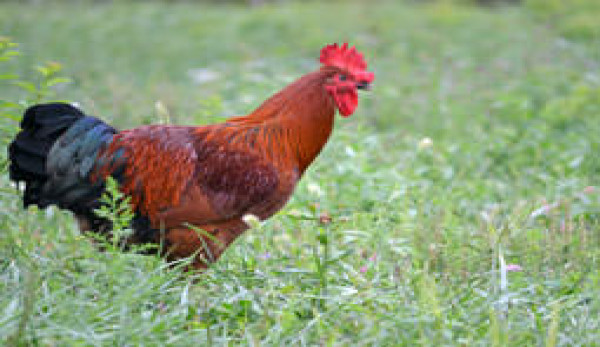 Scientists at The Ohio State University have received a four-year, $896,000 grant from the USDA to study the feasibility of incorporating naked oats into organic farming rotations as a way to cut the cost of producing organic chicken.

Also called hull-less oats, naked oats are named for their lack of an outer hull compared with conventional oats.

The oats, which have a unique protein and amino-acid balance, will be tested in the diets of pasture-raised organic broiler chickens. The chickens will be considered part of the farm operationâ€™s rotational system within a given year, where they’ll serve as both a product to sell and a source of manure to enhance soil fertility.

The goal of the study is to develop a way to reduce the cost of organic chicken feed by growing the cereal portion of the chickensâ€™ diet on the farm, thus making it more cost-effective to raise and sell organic chicken, says Mike Lilburn, an animal sciences professor at OSUâ€™s Ohio Agricultural Research and Development Center in northeast Ohio and the leader of the study.

“What I’m hoping is that in four years we can offer a cost-effective crop rotation alternative to organic producers, one that produces a quality organic product but decreases the cost of production,” says Lilburn, who also holds a joint appointment with the OSU Extension.

Selling naked oats to other organic poultry producers or for use in high-value organic foods, such as granola, could be other options for farmers, he says.

“Naked oats are higher in protein than conventional oats and have an amino-acid profile that may reduce the proportion of high-cost, high-protein supplements that are currently needed to produce balanced organic diets,” Lilburn says. “If our hypothesis is correct and naked oats can be used at up to 70 to 80 percent of the diet for pasture-reared broilers, this becomes a new option for organic producers.”

For now, the cost of organic chicken feed, which is typically bought off the farm, is a limiting factor in expanding organic poultry production, Lilburn says. Organic farmers often sell their chickens only as “pasture-raised” rather than “certified organic” due to the high cost of organic feed. That cost can make the chickens too expensive to produce, even if sold at a premium price. Pasture-raised chickens don’t require organic feed but still get a premium price.

The study will be done at OARDC’s certified-organic research plots at the center’s East Badger Farm near Wooster, Ohio. The chickens will be kept in chicken tractors with spelt and red clover as the other crops in the rotation.

In the study’s second year, three area stakeholder farms will join the project to test the diets and rotations under real-world conditions. The farms will raise two cycles of organic broiler chickens in the second year, then two cycles of heritage-strain broilers in the third year, with a further aim being to compare the different strains’ carcass characteristics and length of time to reach market size, which is typically 6 pounds.

During the course of the study, the scientists will also determine the chickens’ contribution to the soil fertility of the East Badger plots.

When ready, each year’s findings will be shared with farmers through the eOrganic online Community of Practice hosted by the national eXtension network and through workshops organized by such groups as the Small Farm Institute and the Ohio Ecological Food and Farm Association.

Lilburn’s academic co-researchers on the study are Larry Phelan of the Department of Entomology and Marv Batte of the Department of Agricultural, Environmental and Development Economics, both also with OSU, OARDC, and the center’s nationally known Organic Food and Farming Education and Research Program (OFFER); and Matt Mariola of the College of Wooster’s Environmental Studies Program. Deb Stinner, former head of OFFER, now retired, had an initial role in planning the study.

The grant comes through the Organic Agriculture Research and Extension Initiative program of USDA’s National Institute of Food and Agriculture. This past fall, USDA announced this and 22 other grants, totaling $19 million, for research and extension programs at U.S. universities, all designed to advance organic farming.

“As more and more farmers adopt organic agriculture practices, they need the best science available to operate profitable and successful organic farms,” Deputy Agriculture Secretary Kathleen Merrigan says. “America’s brand of organic agricultural goods is world renowned for its high quality and abundance of selection â€¦ These research and extension projects will give producers the tools and resources to produce quality organic food and boost farm income, boosting the ‘Grown in America’ brand.”