Rio takes a step in the wrong direction. 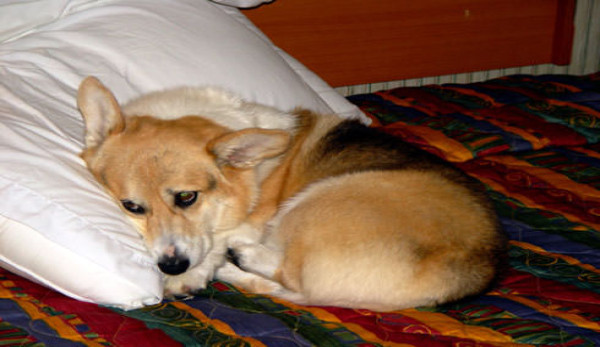 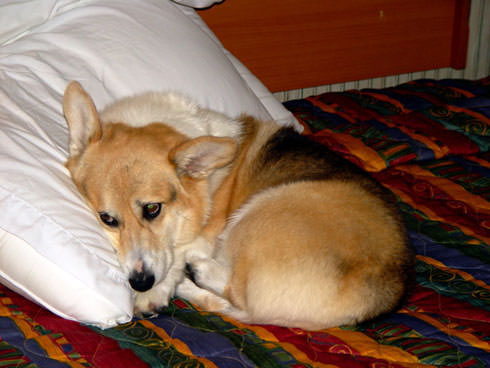 Nigel had the unfortunate experience of being stomped on by Rio.

It was an ordinary morning: My alarm went off at 6:30 and I ignored it for half an hour before getting out of bed. Then, partly comatose, I staggered around the bedroom, putting on my robe and looking for my slippers.

Still not fully awake, I went out the back door to feed the horses, with Nigel following close behind. Instead of seeing my small herd in their paddocks staring at me as they do most mornings, I found Rio on the back lawn, munching away. Only mildly surprised that he had gotten out of his stall at some point during the night, I shuffled off to my tack room to get a halter so I could catch him.

As soon as I got to the back gate that led to the tack shed, Rio spied Nigel sitting on the patio. He left the lawn and walked over to my corgi with his neck arched and ears pricked. Nigel didnŌĆÖt move, but just cowered as Rio stood over him. Then, to my horror, Rio struck out at Nigel with his front hoof.

I have never been so terrified in my life! Nigel yet out a yelp and a snarl and jumped at Rio in self-defense. I was screaming at the top of my lungs while running toward them. If Rio struck again and his hoof landed in the right spot, Nigel could be dead in a matter of seconds.

Fortunately, instead of launching another strike, Rio tossed his head and trotted off. I ran to Nigel, who was looking at me with the most pathetic expression heŌĆÖd ever given. I ran my hands over his back where Rio had landed his blow; fortunately, Nigel didnŌĆÖt seem to be hurt. I asked him to jog alongside me across the patio, and he wasnŌĆÖt favoring any of his legs. I was so relieved I could have cried. I put him back in the house and again went toward the tack shed to get a halter so I could catch Rio.

Although it may be hard to believe after reading this story, Rio doesnŌĆÖt have a mean bone in his body. To him, everything is play. HeŌĆÖs like a giant kitten, trying to turn everything into a game. When the chickens wander into his stall, he chases them. Not because he wants to hurt them, but because itŌĆÖs just fun to watch them run.

IŌĆÖm sure RioŌĆÖs strike at Nigel was not intended to hurt him. I have seen horses act with aggression toward dogs and other animals, and their intent to injure is obvious. This was more of a ŌĆ£Hey, letŌĆÖs play!ŌĆØ Of course, Rio has no clue that he weighs 600-plus pounds and could annihilate a 30-pound corgi with one blow of the hoof.

Even though itŌĆÖs fun to have a pony around, I really canŌĆÖt wait ŌĆśtil my cute little gelding matures into a boring adult.