Several months ago, we purchased a Worm Factory Composting Worm Bin System made from recycled plastic right here in Washington. 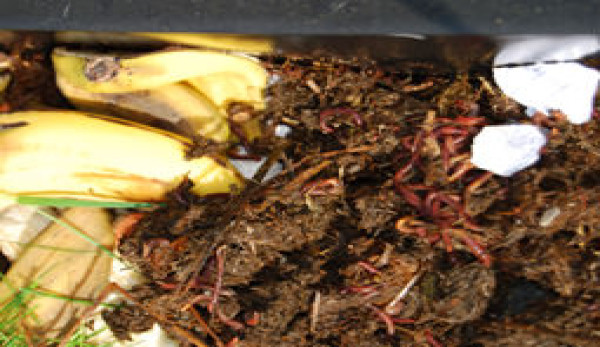 For many years we had a simple homemade wooden bin that served our worms and us well until the bottom rotted out.Â  Building another one had long been on THE LIST, but never seemed to make it into the elite category of projects to actually be started (let alone finished), so we broke down and bought this one instead.Â

This ritzy worm condo consists of a bottom collection tray to capture the liquid leachate called â€śworm tea,â€ť complete with spigot and worm ladder so worms can climb out if they fall in, and stackable trays for the worms to live, eat, and breed in, plus a cover.Â

It came with a 16-page instruction/worm care booklet that left me feeling a bit intimidated.Â  I had no idea, for instance, that worms aren’t supposed to eat citrus peels or salty junk foods, or that you could cook them to death if you toss in fresh grass clippings.Â

Extreme hot and cold temperatures are a no-no, so the bin needs to be sheltered from summer sun and, in northern climes, brought inside during winter.Â Â Â Â Â Â

Apparently these squirmy little creatures need care, just like the rest of our menagerie.

Anyway, this weekend we finally set up our worm bin.Â  Here’s what we did:

1.Â Put the first working tray on the collection tray base and lined it with wall-to-wall newspaper.

2.Â Soaked the comfy coconut fiber bedding in water, squeezed it out, and mixed it with shredded paper and a dash of compost on the trayâ€™s floor.

3.Â Put a few handfuls of food scraps in and covered this with cushy shredded paper, then several sheets of moistened newspaper (Iâ€™m thinking these worms will be the most spoiled in the history of wormdom).Â

4.Â Rounded up our worms.Â  The instructions advise us to purchase worms locally, but Brett had discovered a huge free worm colony in our horse manure pile.Â  The instructions specify using red wiggler worms, and after careful scrutiny we determined the worms in our pile were reddish and quite wriggly and hence red wrigglers.Â

Now for the yucky part:Â  we plucked the worms from the manure and put them in a bag.Â  The instructions recommended starting with at least 500 worms, but squirmy masses of worms are not easy to count, so we just grabbed a bunch and called it good.

5.Â Deposited them in their new home-sweet-home under moistened newspaper, and voila, now I have several hundred more mouths to feed.Â  Granted, they have teeny-tiny mouths and theyâ€™ll be converting our kitchen waste to nutrient-rich compost, but stillâ€¦

Iâ€™ll keep you posted on how they do (unless youâ€™d prefer less slimy subjects!)