An Innovative Way to Keep Your Chickens’ Water From Freezing

This simple gadget will give your chickens access to fresh, unfrozen water all winter long. 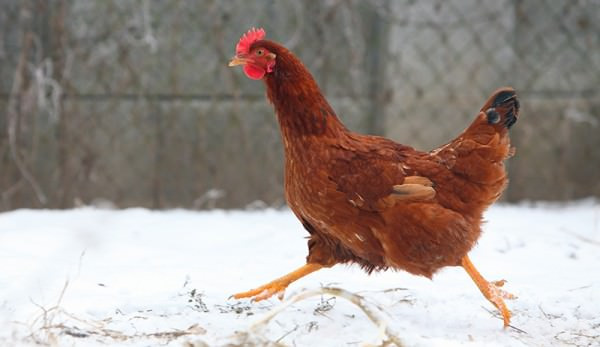 Itâ€™s bad enough that the chickens have to go thirsty whenever their waterer ices up. But it also means that my wife and I have to head out into the freezing weather with a kettle of boiling water or a hammer to break up some ice.

Fortunately, this is only a problem a few times during our mild North Carolina winters. For colder regions, many months of subfreezing temperatures will make waterers rock solid and bone dry. The chickens may worry that you havenâ€™t paid the water bill.

If, like us, you have a water bucket with nipples underneath, you might have heard of some keepers who recommend wrapping electric heating tape around the bucketâ€™s base. However, because the plastic of the bucket is an insulatorâ€”not a conductorâ€”the heat tape is only effective into the upper teens. Plus, to keep the hens from unraveling your work, you would have to use a second bucket to create a sleeve to cover the heating tape.

Other chicken keepers recommend using aquarium heaters. They are inexpensive, and theyâ€™re made to be in water. But chatter online indicates that they wear out quickly. Outdoors, these heaters are raising water from subfreezing temperatures, so they work long and hard until they failâ€”probably at the worst possible time. And when they fail, the ones made of glass burst and electrify the water, as well as the metal part of the nipples. The voltage is low, but still, think of what that does to tender chicken beaks.

At last, I found great option on a chicken forum: birdbath heaters! Theyâ€™re made to work outdoors, they can withstand a long winter, and they function safely underwater. No bucket-cutting, no heat-tape-wrapping and no busted-aquarium-heater-replacing is required. Plug a birdbath heater in, and drop it in the bucket. If you have a lid for your bucket, you can leave it ajar for the season because neither mosquitoes nor algae are active in winter.

In addition to keeping your chickensâ€™ water from freezing, a heater has other advantages. The warm water will keep the chickensâ€™ body temperatures up, so your chickens wonâ€™t need to eat quite as much food to keep warm. Also, because theyâ€™ll be able to drink more water, their overall health will be less at risk. Drinking more water may even encourage more egg production in winter.

But donâ€™t just rely on the birdbath heater alone. I highly recommend a few more components for the sake of savings and safety:

Nonetheless, there is a very small chance that the cord or the heater could short out in wet weather for various reasons. A short could then go through the outlet, heat up more wires, and cause a fire in your house or garage, so plug the cord into a ground fault circuit interrupter outlet. A GFCI outlet turns itself off in response to a short and saves your house. After you fix the short, pushing a button on the outlet revives it. A licensed electrician can switch any normal outlet to a GFCI. Itâ€™s worth it: After all, youâ€™re dropping a live electrical device into water.

If your birdbath heater doesnâ€™t come with an internal thermostatâ€”it should say on the boxâ€”youâ€™ll waste a lot of energy while it runs as the temperature warms up. A TC-3 Thermo Cube has a simple internal thermostat. Plug it in between an exterior outlet and the cord (or another spot exposed to outdoor temps), and it will only turn on when the temperature drops below 35 degrees and turn off when the temp rises above 45 degrees. It will pay for itself through saved energy and by extending the life of the heater. You can purchase these easily online.

This collection of simple, reliable and inexpensive devices will let you sleep in on lots of icy cold mornings and go on worry-free winter vacations.