A little wintertime fruit-tree maintenance will pay off big time this summer when you’re ready to harvest apples, pears, peaches and more. 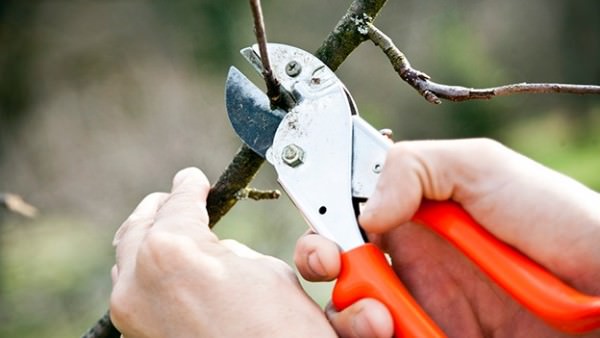 When the last chill days of winter are passing and just before spring coaxes buds onto branch and limb, it’s time to give your fruit trees a bit of TLC in the form of dormant pruning. With proper training a pruning, your fruit trees will not only look more beautiful, they’ll produce more and better-quality fruit and live much longer. Pruning:

The first aspect of proper pruning is timing. In order to avoid damage from the cold, dormant pruning is best done at winter’s end, just prior to sap returning to the branches. It’s sometimes suggested to prune fruit trees at the beginning of winter, after leaf fall, but this is not ideal because the tree might not have entered true dormancy at that point.

Pruning during dormancy causes vigorous spring/summer growth because the tree has its full supply of energy and fewer limbs to support. When the sap does return to the branches, the tree will respond by sending out new shoots. For this reason, dormant pruning should not be overdone or you will end up with an abundance of branch and leaf growth but less fruit. A good rule to follow, according to the North Carolina Cooperative Extension, is to start with the latest blooming tree species and end with the earliest blooming ones. Within each fruit type, prune the oldest first, as the young ones are more prone to winter damage.

You can employ some summer pruning to maintain your fruit trees. Remove any growth that shades the interior of the tree or the water sprouts (aka, suckers) that grow vertically from root and branch but are not useful for bearing fruit.

Pruning tools are fairly basic. Prior to starting a pruning job, gather the following supplies:

Keep your tools sharp, and be sure and disinfect the blades as you move from tree to tree. If you are removing diseased branches, disinfect between each cut, even within the same tree, but note that no disinfectant is 100-percent effective against disease. Virginia Tech recommends full-strength Listerine and rubbing alcohol at 70-, 91- or 99-percent concentration, but advises against using Pine Sol or bleach, as these products can be corrosive to metal.

There are three basic types of pruning cuts you can use to effectively shape up your tree.

These cuts are made to remove an entire branch. Because trees heal pruning cuts by sealing over them, do not cut flush with the trunk or branch because this is harder for the tree to seal off. Rather, leave the branch collar—the swollen area at the base of the branch—making your thinning cut just above and at a 45- to 60-degree angle to the branch’s bark ridge, which spans the trunk-to-branch crotch.

These cuts remove a portion at the end of a branch. NC University says, “This type of cut promotes the growth of lower buds with the greatest vigor just below the cut. When lateral branches are headed into one-year-old wood, the area near the cut is invigorated. The headed branch is much stronger and rigid, resulting in lateral secondary branching for approximately 12 to 15 inches.” They go on to advise that cuts made into wood two years and older can help keep older trees from growing too large for their space, as new growth does not spring as readily from older branches.

These cuts are used when you want to remove larger, upright branches in order to direct growth to less upright branches or to open the tree’s center. A major cut from which a tree will need to recuperate, this type is used only when necessary rather than routinely. Cut at a slant so moisture doesn’t rest on surface and promote rot.

There are two basic ways to prune fruit trees for structure: central leader or open center (scaffold). The growth habits of apple and pear trees lend themselves to central leader training, while stone fruits, such as peaches and apricots, do well with the open center/scaffold method. But either way, professionals and long-time tree pruners tend to follow a certain order of operations as they prune a tree before it breaks dormancy. The first couple of years is key in establishing proper structure, and fruit trees should be pruned annually to maintain shape and production.

A tree’s vigor will help determine how much to head back its branches. The University of Iowa says:

“The best method of determining how much to prune is to judge the tree vigor and anticipated crop. For most bearing apple trees, the tree is considered to have adequate vigor if it produces an average of 10 to 15 inches of terminal shoot growth. If the terminal growth is less than this, it should be pruned more heavily than the previous year or more nitrogen should be applied. If average terminal growth is greater than 15 inches, less pruning should be done or nitrogen reduced.”

This might seem counter-intuitive at first , but remember that pruning stimulates new growth, so if your tree has put out more than 15 inches of new growth at the end of most of its branches, pruning heavily will stimulate more of the same. Do be aware that certain trees—peaches, for example—bear on the previous year’s wood, so you don’t want to remove all of last year’s growth when you head back or you will lose much of your fruit-bearing potential. Your local cooperative extension agent will have helpful literature on specific varieties, and there are many reputable resources available through local nurseries or online, as well.

As you can see, fruit tree pruning is not complicated, but it is necessary. So if spring is just around the corner in your neck of the woods, it’s time to pull out your pruning tools and give your trees their annual bit of TLC. They’ll thank you for the attention by growing strong structures, branches, and of course, fruit!