A Gift of Chestnuts

After receiving a generous gift of chestnuts, I began experimenting with mouth-watering chestnut recipes. 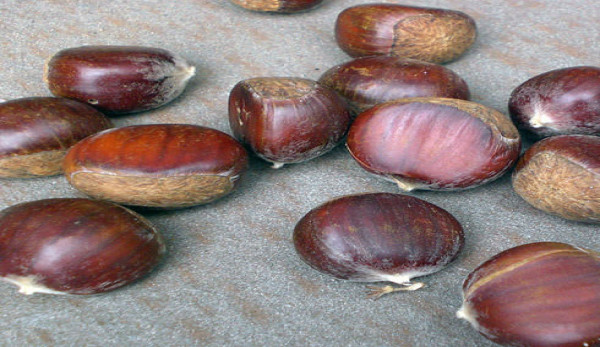 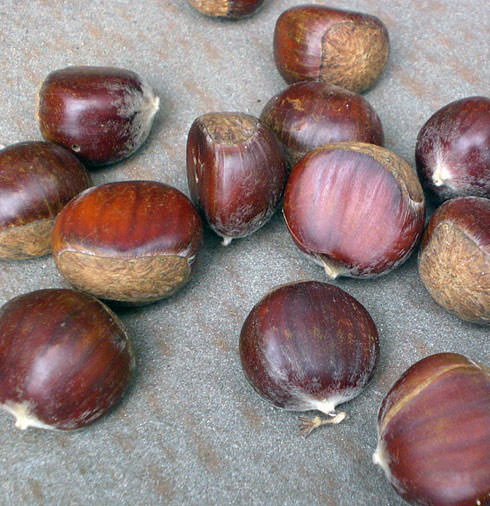 I love the sweet,Â delightful taste of chestnuts.

â€śLook what Tarsha brought me,â€ť said my friend Charlie the other night. He held high a big bag of glossy-brown chestnuts. â€śShe said theyâ€™re all over her yard.â€ť

Charlieâ€™s colleague, Tarsha, and her neighbor somehow have a huge crop of American chestnuts from two large trees in their Danbury, Conn., yards. According to The American Chestnut Foundation (www.acf.org), which develops and reforests blight-resistant trees, â€śThe American chestnut tree reigned over 200 million acres of Eastern woodlands from Maine to Florida, and from the Piedmont west to the Ohio Valley, until succumbing to a lethal fungus infestation, known as the chestnut blight, during the first half of the 20th century.â€ť

The blight came into the country not far from here on infected Asian chestnut trees planted in Long island, N.Y., in 1904.

What a rare bounty Tarsha had given us! I love chestnuts, but virtually all Iâ€™ve ever eaten, even the nostalgic bagsful of roasted chestnuts still sold on the streets of New York City, are imported, often from China or Italy, and often spoiling quickly from the long trip. Tarsha was sharing with us piles of them, but she wasnâ€™t even sure how to eat them.

First off, I cut a small â€śXâ€ť in their tough, shiny shells and stuck a panful in the oven. While theyâ€™re roasting, the shells peel back at the cuts so you can crack them off. Roasting also sweetens and softens the nut. Charlie and I cracked open that first round while we sipped red wine, snuggled around an outdoor firepit and watched the sunset. Easy.

But I wanted to do more with this windfall of chestnuts. A rich bisque with carrots orÂ pumpkin was a savory possibility, but Iâ€™d just brought home two wonderfulÂ chickens raised about 5 miles from home so, of course, I thought, â€śChestnut stuffing!â€ť

I sautĂ©ed chopped onions, shallots and celery in plenty of butter; tossed in bread crumbs, sage and parsley to absorb the butter, and then added chopped, roasted chestnuts and seasoning while it all toasted a little in a pan. Into the bird this chestnut stuffing went, lending a woodsy flavor and chewy texture to our classic roast chicken-Sunday supper.

If your tradition is rice stuffing, the chestnuts would also combine well with that, especially with wild rice. I didnâ€™t use fruit, but apple chunks, pomegranate seeds or dried cranberries would make sweet-tart add-ins as well. Try a stuffing a turkey with this mix or even a goose.

Then, I poked around in a French cookbook for a dessert. In France, chestnuts are often candied in syrup or pureed to make a sweet pastry filling. Many recipes combine chocolate and chestnuts, too. Instead, I picked a honey cake to combine and celebrate these two wild foods. The original recipe used walnuts, but I reasoned that subbing in roasted chestnuts would work fine. I was right. The cake was dense with warm flavors, almost medieval somehow, like the pounded fruit and nut pastes of Italy. â€śMmmm!â€ť Of course, I sent Tarsha a portion of this experiment.

I also had enough of the chestnut gift to make a round of bread. I used to often make bread but had eased off because I ate way too much of it by myself! I got started with simple, slow-rise dough and then drizzled in a little hazelnut oil. The chunky, soft, roasted chestnut pieces made the bread really special â€” not a slice you see every day, for sure. To the last rise, I could have added raisins or other dried fruit, too, or gone savory by adding chopped olives at the same stage.

The gift of chestnuts inspired me. Also, now Tarsha knows what an unusual â€” and delicious â€” crop she has right in her suburban backyard.