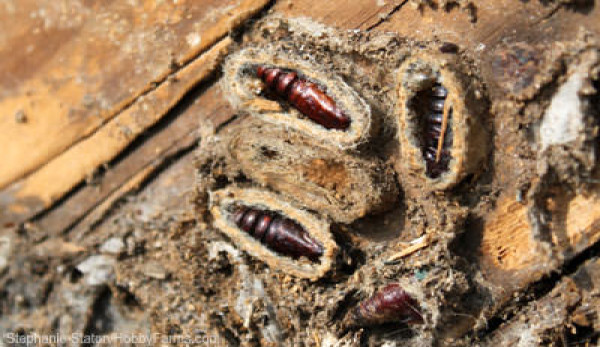 Having recently purchased a 10-acre farm with a 90-some-year-old house on it, my husband and I embarked on a renovation like none weâ€™d tackled before. Going into the purchase, we knew we were looking at a fixer-upper but were drawn in by the period details, like the solid-wood doors and fireplace surrounds that were preserved in the small home. As part of our due diligence, we ordered a termite inspection as well as a general house inspection, which more than confirmed our fears: Termite and powderpost beetle damage was present. Little to no crawlspace made it impossible to tell the extent of the damage and the inspector didnâ€™t see any current signs of activity, but he warned us that the damage could extend throughout the entire floor structure or be limited to the back eastern corner where the damaged rim joist was exposed. Other signs of damage included worm-like treads in the hardwood floorsâ€”according to the termite inspector, these are made by termites that bore up through the floor, and preferring darkness, tunnel back down when they reach lighted areas.

With this in mind, we negotiated the house to a price that we felt would be within our means to repair and moved forward with the project. While I was aware of the damage, the level of destruction wreaked by these tiny bugs never ceased to amaze me throughout the project. There were times when we could hardly get a joist out because it crumbled under the slightest pressure, leaving nails and wood pieces in its wake, which might have been good except that we needed the nails out, tooâ€”an impossible task when you canâ€™t create leverage.

When it was all said and done, we replaced all of the rim joists with the exception of a small portion on the front and most of the floor joists along the outer perimeter, scabbing on to any still stable joists in the center of the house. It was no small feat, and I hope to avoid a similar situation in the future with some preventive measures, such as digging out a crawlspace under the floor, grading the slope away from the foundation on the east side and spraying regularly.

If my experiences have your attention, you can learn more about these wood-devouring crawlies and how to prevent them in “Room for Improvement.â€ť Spring is the perfect time to arm yourself against and protect your home from these gnawing nasties!