Reflecting on a life full of growing food, one gardener reflects on the sweet joys of having a little help getting the garden started. 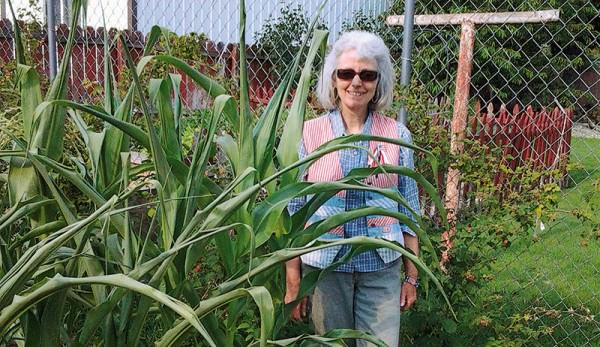 With reluctance, I opened the plastic packaging, which contained a set of colorful, double-bed sheets. Birds and butterflies flitted among green, blue and pink floraâ€”a bit dizzying and gaudy for my taste. After all, I grew up in a household of white sheets on every bed. I hadnâ€™t even known colored sheets existed until I went to slumber parties in junior high school.

So now, as a young wife, I hadnâ€™t yet used the gaudy sheets. Iâ€™d waited to open this wedding gift after all my other new sheets had been used at least once. As I unfolded and smoothed the creases, I had to smile. The pattern included cornucopias filled with garden delights, reminding me of my family home in Arkansas. I now lived more than a thousand miles from that home, in a rented trailer, without a flower or a garden in sight.

I spread the sheets on the bed, tucked in the edges and wondered when such a garden might materialize for me. Should I even mention the idea to my new husband? His family had no interest in growing things. Perhaps his mother once had a potted plant in the house, but not vegetables or flowers or even a pet.

By contrast, Iâ€™d grown up on a farm, where we had dogs, cats, ducks, chickens and the occasional horse. Before my father retired, we raised soybeans, hay and beef cattle. And our garden was the envy of the neighbors. Mother canned and froze the excess, which we enjoyed throughout each winter.

Gardening On The Move

I longed for that kind of garden, but this wasnâ€™t the time. So I waited. We lived in the trailer in Connecticut for a year before moving to a house with a large lot behind it. However, before we could clear all the weeds and underbrush, we had to relocate for a new job. Our next residence, this time in South Carolina, came with an acre of land, and we borrowed a rototiller to work up a garden plot.

My husbandâ€™s maiden attempt with the machine made me laugh out loud: The beast bucked and dug and pulled him across the yard, displacing more grass and making deeper furrows than either of us had planned. Nonetheless, we planted seeds and produced some wormy tomatoes and a handful of unpoppable popcorn that first year. The following season, we raked in a little more produce, but then we moved again to pursue educational opportunities.

This next house, in Texas, had only a small backyardâ€”all shadeâ€”but room for a few tomato plants in a sunny spot near the driveway. In the 10 years we lived there, we became tomato experts, and I added a flower bed nearby for gladioli. But nothing more, and another move for another job took us to Washington and an apartment.
Even so, I wouldnâ€™t be denied. I bought big pots for the balcony and planted tomatoes and peppers. Eventually, we went house-shopping. Among our criteria were a turnkey residence, with no remodeling or updating required, and a ready-to-use garden.

Weeks of searching for just the right place finally brought results. The house suited our needs perfectly, and the yard sported two fruit trees: plum and apple. Best of all, at the back of the property stretched a garden space with rows of raised beds, some with vegetables in bloom. Before we could even get dirt under our fingernails, the plot was ready for us!

We remembered a lesson from a preacher a few years earlier, discussing the blessings that come from beyond our own efforts. He had quoted Deuteronomy 6:11, which reads: â€śâ€¦ and houses full of all good things which you did not fill, and hewn cisterns which you did not dig, vineyards and olive trees which you did not plant, and you eat and are satisfied.â€ť

Indeed, in our previous locations, weâ€™d tried to make gardens from scratch but always fell short. Here, we were simply appropriating someone elseâ€™s efforts. We realized not everyone is a self-starter. Some of us need help. Thanks to the previous owners of this garden, we had ready soil for corn, heirloom tomatoes and pole beans. We soon experimented with kale and winter squash, and we established compost bins to recycle kitchen scraps and grass clippings. Looking with optimism into the future, we smiled at the possibilities.

That last move became a permanent one, and weâ€™ve lived here 20 years now. My husband has taken to gardening as if heâ€™d been doing it since childhood. Our raised beds are the envy of the neighbors and have produced enough for us to enjoy each summerâ€™s bounty and fill a freezer for every winterâ€”just as Mother did years ago. We also delight in our flowerbeds with mums, tulips, sunflowers and irises.

Recently, I dug through the linen closet and found that multicolored sheet with the garden theme. It was well-worn and faded, but full of memories. The cornucopias with flowers and vegetables had become a reality in our lives. I looked out my window at the bountiful garden and gave thanks. And the sheet didnâ€™t seem gaudy at all.

Ruth McHaney Danner is a Hobby Farms reader that lives in Spokane, Wash.