A Man, A Goat and the Open Road

If you're going to walk from Seattle to New York to raise awareness for your best friend’s work in Africa, you might as well take a goat with you. 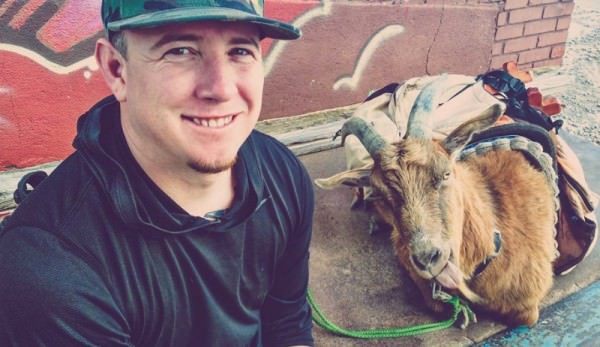 “He may be brown, but really, he’s made of gold,” Steve Wescott says about LeeRoy Brown, his Alpine/Boer goat and walking companion. Steve and I talked on the phone a couple of weeks ago about his project Needle2Square, a 2,800-mile cross-country journey on foot.

On May 2, 2012—the 20th anniversary of Steve’s father’s death—Steve and LeeRoy hit the road to raise awareness and funds for Uzima Outreach and Intervention, Steve’s best friend’s ministry in Kenya for substance-addicted adults and neglected and orphaned children. The plan was to walk 10 miles per day and be finished in a year. This is a reasonable calculation for an individual walking across the country, but add a charming goat into the mix, and suddenly you find it hard to walk 10 feet without someone stopping you for photos and a chat. “Every day, all day, it’s just a sea of camera phones,” Steve says. This has turned out to be great because he’s had a chance to talk with so many more people about his mission.

In 2012, the pair made it from Seattle to just past Salt Lake City before snow hit and they had to take a break for the winter. In the spring of 2013, they started again where they left off and made it to Kansas City, Mo., by Thanksgiving. This year, Steve and LeeRoy only made it as far as Saint Louis before getting sidelined by an injury caused by a dog attack. They encounter a lot of dogs, many of which are unsure about having a goat around or just plain upset about it.

In this particular angry-dog encounter, neither Scott or LeeRoy were attacked by the dog, rather LeeRoy got tangled in his leash when the dog came after them and he tried to get away. Steve said it’s difficult to find a veterinarian who really understands how to treat the equivalent of a performance goat. This is just like a performance horse, in my mind, and after seeing a few doctors, the University of Missouri at Columbia were able to get LeeRoy on the mend and on the road again.

They stopped walking earlier this year in Effingham, Ill., as a result of back and hip issues Steve has developed from three years of being on the road. This isn’t the end for them, though.

Steve’s Giant Education
“Goats are so underrated,” Steve says. “I had no prior experience with the animals. I was a city kid. I’d never camped, really, before this.”

I asked about his training regime, and Steve told me, “I ate a lot of Jimmy John’s sandwiches, and I watched a lot of YouTube videos on how to camp.” I laughed, and he said he was totally serious. He was trying to gain weight before the trip, thinking all of this walking would make him drop weight. Instead, the opposite is happening. “I blame the goat,” he says, because he has to go at LeeRoy’s pace.

The preparation was mental as much as anything, and the mental portion of the trip really kicked in after he go through Seattle, Portland and Boise, where he had a lot of friends and a lot of support from people he knew. After that, it was largely just him, the goat and the road.

Steve caught a lot of flack from goat lovers about this trip. Everyone wanted to offer their advice—and criticism—about the way he fed and cared for LeeRoy. Knowing nothing about goats before taking off, Steve relied—and still relies—on LeeRoy to tell him what’s happening in his goat world: “I have learned to trust him, and even though his personality is subtle, I know him.”

Now, LeeRoy knows how to ride in a car and subtly moves closer to his pack when it’s time to load up and get moving.

From Green Pastures to the Red Carpet
Next up for Steve and LeeRoy are a documentary and a reality television show. Neither of these are things Steve asked for, having expected this experience to last only one year. All the better, as the whole point behind Needle2Square, after all, is to spread the word about his friend’s ministry far and wide. This additional publicity will take them farther than their six feet can go on their own.