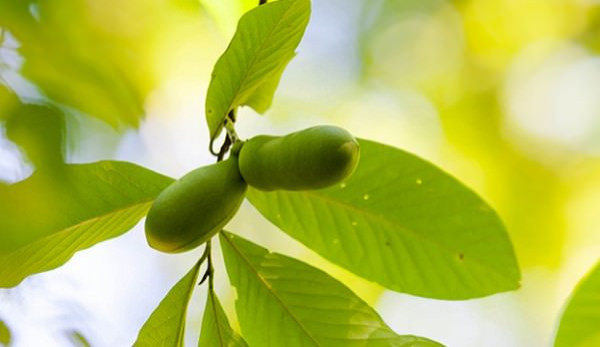 I remember being flabbergasted the first time I heard about the pawpaw fruit. Iâ€™d lived my whole life in North America and had no idea about the existence of something called an “Indiana Bananaâ€ťâ€”apparently, it was growing quite prolifically on my continent.

The pawaw (Asimina triloba) is the largest edible fruit native to North America. It turns out, I never had the chance to taste one in Canada because they werenâ€™t hardy to my zone, they donâ€™t transport well, and they donâ€™t keep well either. Pawpaws are unusually high in protein for a fruit. Theyâ€™re custard-like, and taste like something between a mango, banana. and cantaloupeâ€”too musky or fragrant for some but highly sought-after by others.

My fascination with this treeâ€”though nurtured without a taste-test and over a great distance once I moved to Europeâ€”led to my creating a seed distribution and research endeavor, simply called the Paw Paw Project. I partnered with Kentucky State Universityâ€™s Pawpaw Program and managed to get free seeds distributed to thousands of people around the world.

I received my pawpaw ten seeds from KSU a year ago, and now that I live within the range of cultivationâ€”this species can only tolerate temps as low a -25 degrees F, which puts it in USDA zones 5A through 9â€”I am confident I will have a few healthy trees. Although I wonâ€™t be able to taste the fruits for five to eight years, tree planting is almost always worth the effort.

You can still participate in the Paw Paw Project and plant this weird-but-wonderful tree in your neighborhood. If youâ€™re a resident of the United States, acquiring free seeds is a matter of emailing the KSU Pawpaw Program with your address. For those of you living outside of the United States, I have seeds available.

When you plant them, consider providing the Paw Paw Project with germination data. What started as a seed distribution project has turned into a bit of a crowdsourced amateur science project; Iâ€™m looking at this data and seeing how well the pawpaw tree fares at the limits of its range.

To germinate pawpaw seeds, do not let the seeds dry out. Make sure they have a cold-stratification period, break the seed coating a little bit, and once theyâ€™ve germinated, take care not to disturb their long taproot. Being an understory tree, pawpawsâ€™ first few years are best spent in the shade, but after that, they can adapt to sunshine.

Most of the natural seed dispersal vectors for this fruitâ€”like giant sloths!â€”are long extinct in North America, so it needs a little human help in order to conserve it. Consider making your backyard or neighborhood a sanctuary for this tree, and it will reward you with gorgeous (albeit stinky, beetle-pollinated) flowers and remarkable fruit.