Build An A+ Diet For Chicks & Pullets

Chicks can only reach their maximum potential for growth, good looks and egg-laying if they receive a proper diet. 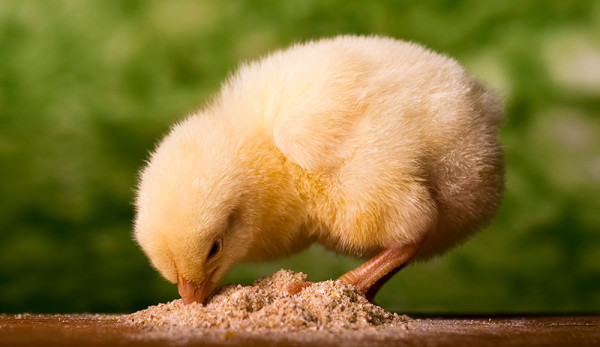 The cost of raising chicks may surprise you, which is why itãs critical to feed them correctly for their age and typeãegg-layers or meat chickensãfrom the day they hatch or you bring them home. Proper feeding insures theyãll repay you by reaching their full potential for size, egg production and beauty.

Chick and pullet rations can be homemade or purchased commercially. However, commercial brands are generally recommended because manufacturers have honed their formulas to yield excellent growth and performance. Producers segregate these formulas by age and, further, into those for egg-layers or meat birds. The ingredients are similar, but the proportions vary to provide the proper nutrition for each bird. Both medicated and nonmedicated feeds are also available. Itãs simply a matter of selecting the correct feed for the age and breed of chick youãre raising.

Janet Garman, author of Chickens from Scratch (2014) and owner of the website, Timber Creek Farm, says that the most important part of feeding chicks ãis to have feed available 24/7, because like all growing babies, they eat and sleep continuously.ã

Until they are about 6 weeks old, egg-laying breeds should be fed a chick-starter feed, while meat chicks should be fed a broiler-starter. Young chicks create feathers and grow at an incredible rate, so itãs imperative that they consume high levels of nutrients and protein. The rations for meat breed chicks are higher in protein and carbohydrates to maximize weight gain and growth.

After 6 weeks, egg-laying breeds should be switched to a pullet-grower and meat breeds to a broiler-finisher. Grower and finisher feeds are lower in protein because older chicks are no longer making many feathers and have different nutritional needs.

For egg-laying breeds, there are pullet-developer rations that are used to replace the grower feed at about 14 weeks of age. Developer rations are formulated to prepare young pullets for egg production. They can sometimes be difficult to find and are similar to grower rations, so itãs not critical to use a developer if itãs not readily available.

Medicated feeds are usually available and are used to help prevent chick losses due to the disease coccidiosis. They typically contain a coccidiostat and may also contain an antibiotic. They can be fed to chicks intended for eggs up to 16 weeks of age and should be discontinued five days before slaughter for meat breeds.

Garman, a former feed storeowner, experimented with chick feeding costs and concluded that each chicken costs approximately 10 cents per day to feed.

ãThatãs based on name-brand chick feeds at around $16 per 50-pound bag,ã she says. ãIf you extrapolate over the 20 weeks it might take an egg-layer to develop, you arrive at $14. Thatãs my estimate of what it takes to raise a chick to egg-laying.ã

Of course, total costs can vary widely based on the type of feed used and the time it takes a chick to reach maturity. Organic and higher protein feeds are more costly, while meat chickens are ôÙgenerally slaughtered much younger than egg-layers start producing.

Young birds can only reach their maximum potential for growth, good looks and egg-laying if they receive a proper diet. When fed correctly, chicks will thrive and eventually provide us with lots of healthy meat or superior tasting eggs.

Lesa Wilke is a homesteader and freelance writer who loves to inspire others on their journey to more sustainable lifestyles. She accomplishes this by sharing the skills sheãs learned (plus support, advice & tips) while farming goats, chickens, honeybees, and produce on her website Better Hens and Gardens (www.betterhensandgardens.com), as well as in articles for national publications.