A Simple Guide to Yard Carts

For transporting small loads short distances, a yard cart is what you need. 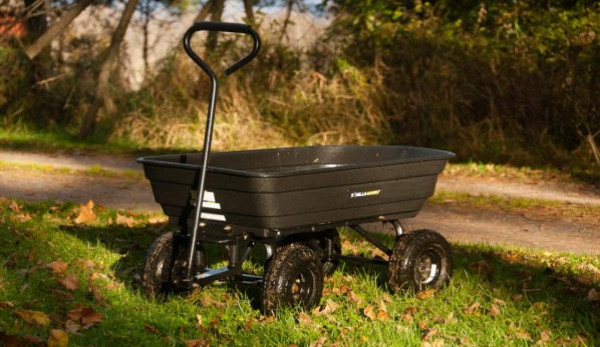 On every hobby farm, there is a seemingly constant need to move things around: hay bales, jugs of water, livestock bedding, tools, garden suppliesāyou name it. They all need to be transported across the farm at one point or another. While ATVs and tractors are great for moving things around, particularly across long distances or when youāve got a heavy load, small yard carts are also great to have on hand for moving small loads across the barnyard, saving your muscles some effort without requiring you to go start up the ATV. If youāre interested in adding a yard cart to your equipment shed, hereās a simple guide and some of the features to look for when buying.

When you think of yard cart, you probably think of a four-wheeled cart that you pull by hand, but you can also get one- or two-wheeled wheelbarrows that you push from behind. These carts are great for transporting loads of material that youāll want to dump, such as manure, but require more effort on your part because youāll be lifting one end of the cart and supporting part of the load. Four-wheeled carts carry the entire load themselves, but canāt be dumped as easily unless they have a built-in dumping feature.

Sides or No Sides?

Some yard carts come in a flatbed style and donāt have sides to hold loads in place, while others have sides to prevent objects from falling off the wagon. At first glance, a wagon with sides seems most idealāafter all, you donāt want your tools or supplies rattling off while traversing a bumpy path. On the other hand, Iāve found that flatbed carts are better at transporting objects that are really too large to fit on the cart, such as shovels, rakes, hay bales or even fence posts. Some carts offer the best of both worlds, with hinged sides that flip up or raise down, making them more adaptable to whatever items you need to transport.

While small yard carts often have a metal frame, the bucket can be made out of a variety of materials, the most common being metal and heavy plastic. Iāve used carts made of both materials and have found both to work well, though plastic carts can bend and give way a bit under heavy loads. Metal can be stronger but is also prone to potential rusting, depending on how it is used and stored.

Another thing to consider is whether the container or flat bed is solid all the way through. Some carts are built of criss-crossing metal strips and arenāt as good for transporting loose material like dirt, sand, or manure; instead, theyāre designed for hauling larger objects, like hay bales. On the other hand, such carts donāt experience the same buildup of waste, debris and rainwater that solid carts can gather because the open design of the criss-crossing metal lets these materials fall through to the ground.