Unfortunately, the weeks after Easter yield lots of abandoned baby chicks. Follow these steps to care for any abandoned Easter chicks you might find in your care. 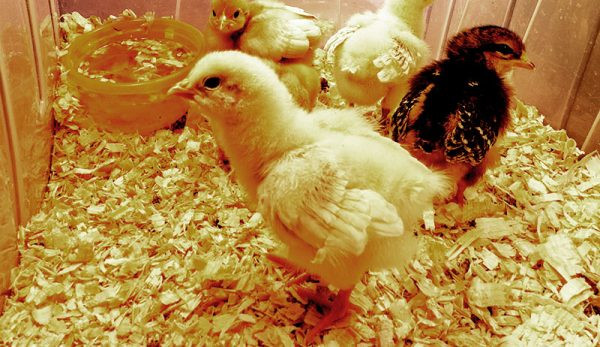 Their brooder is set. The heat lamp is up. A chick-feeding trough and a chick waterer are clean and ready to go. All we’re waiting on are the chicks.

No, we don’t have any broody hens, and we haven’t yet pulled out our incubator this season. We haven’t ordered any chicks, not from a hatchery and not from any breeders. Yet the chicks will come. They always do.

Every year, the week or so after Easter, we find the proverbial baby in a box on our doorstep. It might be because I’m known in the area chicken-keeping group I administer. Perhaps local feed mills and farm-supply stores recommend me.

Then again, it’s hard for anyone driving our rural highway to miss our big FMA Farms sign. Regardless of how, they do find us.

Who are “they?” They are a poultry breeder’s nightmare. They are the well-meaning parent or relative who buys a child live chicks (or ducklings or even baby bunnies) as Easter presents.

Oh, yes, these young critters are definitely cute and cuddly that first day, and possibly the next few. But when the realization hits that these chicks have specific food, care and rearing requirements, that thoughtful Easter gift just isn’t quite as adorable any more.

For this reason, many poultry and rabbit breeders we know (including ourselves) refuse to sell any babies to brand-new customers in the weeks just before Easter.

We have seen domestic ducks swimming in public lakes and rivers. We’ve seen domestic rabbits scampering in parks and wilderness areas. And, every year, our doorstep becomes a dumping ground for unwanted Easter chicks.

Sometimes it’s not even our doorstep. On two occasions, people have dumped boxes of chicks at the entrance to our driveway. Fortunately, we found them before the poor babies were exposed to the elements too long. Easter in Michigan doesn’t experience warm temperatures.

If you are known to keep chickensâ€”even if your flock is a three-hen microflockâ€”then you might also be a “chick magnet.” And I don’t mean that in the high-school-hunk sort of way.

If a friend of a friend knows you raise backyard birds or if you have a small-flock hobby farm, some Easter chicks might be coming your way. Be prepared for this unpredictable, often inevitable event by taking the following steps.

Anticipate Easter chicks being dropped off at your door by having a brooder set up and heated to an ambient temperature of 90 degrees.

Chicks require 95 degrees for their first week of life. And most Easter chicks are abandoned at one week of age, so 90 degrees presents a good starting point from which you can adjust the temperature as necessary.

Ninety might be a bit warm for older chicks, but the additional heat will help warm chilled chicks who were exposed to the outdoors when cast away.

We don’t know where these chicks came from, how they hatched or what they have been exposed to. Protect your existing flock by putting biosecurity measures into effect.

Quarantine the chicks’ brooder at least 100 yards away from your closest coop or pen. Do not store anything you use for your existing birds near the new arrivals. And do not use share the same equipment, not even a bucket or feed scoop.

Thoroughly sanitize your hands after handling the chicks, especially if you are heading out to deal with your flocks next. If possible, wear different clothing and shoes to prevent inadvertently carrying microbes from the chicks’ pen to your existing girls.

Small children who don’t know how to properly deal with infant poultry almost certainly repeatedly handled them. They have been cared for by adults who most likely have no background in farming, animal husbandry or poultry rearing.

Chances are the chicks are under- or malnourished. Easter-chick gift recipients usually do not understand baby-chick dietary needs.

Then, after all of this, someoneÂ  unceremoniously dumps the chicks.

Your tiny new wards have been through a lot. Give them a fighting chance by adding an electrolyte such a Sav-a-Chick to their waterer. Adding a liquid infant vitamin, such as non-iron Poly Visol, can also provide them with necessary nutrients.

Spraddle leg is a possibility, as these chicks might not have had the opportunity to walk on non-slippery surfaces. You’ll also want to watch for is pasty butt, which tends to afflict chicks that have chilled, overheated or had improper hydration.

Keeping a keen eye on your new arrivals will ensure they have the best second start to life possible.

4. Collect Data for Their New Owners

Perhaps you raise only a specific breed of chicken. Maybe your home owners’ association or the city where you live limits how many chickens you can have.

Whatever the reason, it might be that you simply cannot keep the abandoned Easter chicks you’ve taken in.

That’s OK. Don’t feel bad about this. You’ve already gone above and beyond by giving these little fluffs a better, more appropriate chance at life.

To further ensure they’ll be fine at whatever farm or backyard they’ll call home, give them a few weeks with you.

This will not only allow the chicks to grow and mature in a healthy, social environment. It will also let you note their feathering and coloring so you’ll have an idea about their breed or variety.

You’ll find it much easier to perform this task on feathered juveniles with distinctive patterning than on a bunch of golden week-old peepers.

Having some notion of what breed your babies are will help attract potential buyers looking for a specific pullet or cockerel.

Be up front with potential buyers: Let them know that these are rescues from Easter. Chances are, they’ve been Easter rescuers themselves and will more willingly give your young bunch a forever home.