Abnormal eggs are, in fact, a normal part of keeping chickens. Here are some common weird eggs, how they happen and what they can mean. 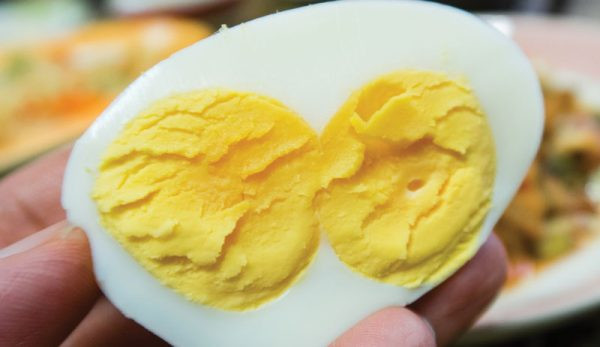 One of the most important moments in the life of any chicken owner is when their hens lay eggs for the first time. The day you find one, two or more eggs in the nest is the day you feel like all your effort was worth it. Then, one day you find something that looks like an egg, but it‚Äôs definitely not the same as all the others.¬†

Maybe your unusual egg is unusually big, maybe it‚Äôs very small or maybe it doesn‚Äôt have a shell at all. You‚Äôve discovered an abnormal egg, and you aren‚Äôt sure whether you can eat it, throw it away, or take a pic and post it to your Instagram account with your other photos of eggs. ¬†

For the most part, it‚Äôs normal for chickens to lay abnormal eggs. But sometimes it‚Äôs also an indicator of something you need to watch out for or a signal that your flock needs a change in their diet.¬†

Abnormal chicken eggs come in all shapes and sizes. But you‚Äôll see the following types most often.¬†

When you find an egg in the nesting box that‚Äôs quite a bit larger than your other eggs, you‚Äôve probably found a double-yolk egg. You won‚Äôt be able to confirm until you crack it. When you do, though, you‚Äôll find two normal-sized yolks inside.¬†

A double-yolk egg happens when your hen releases two eggs in her oviduct and both eggs are included in the shell. While eggs like this are considered abnormal, it‚Äôs only a cause of concern if your hen becomes egg-bound because she can‚Äôt pass it.

Most hens, though, usually don’t struggle to lay the occasional larger-than-average egg.¬†

Eating double-yolk eggs is like cracking two eggs at the same time. They‚Äôre such a popular treat that some shops in the United Kingdom offer a dozen guaranteed double-yolk eggs. If you decide not to eat it and you‚Äôd rather try incubating your double-yolk egg, your odds of succeeding are slim.

One embryo will almost always die before the hatch. Yet some people have successfully welcomed two chicks from a double-yolk egg.¬†

When you crack an egg over a bowl or into a pan, you expect a yolk to come out. With a yolkless egg, the only thing you‚Äôll see when you crack it is egg white. Eggs with no yolk tend to be smaller in size, too.

If you raised chickens 100 or more years ago, you might have called this type of egg a witch‚Äôs egg or a fairy egg. It was common back then to think a rooster laid the egg. There were various superstitions attached to finding an egg of this type.

But the real reason it happens is that the pullet wasn‚Äôt quite ready to lay yet or some reproductive tissue broke away. The egg-producing glands think it‚Äôs a yolk, and that fragment gets wrapped up in the egg-laying process so yolk isn‚Äôt produced.¬†

You can still eat a yolkless egg. It‚Äôll be just like you‚Äôre eating an egg white after you‚Äôve separated it from the yolk.¬†

This one might make you do a double take. You crack an egg over a bowl and instead of a yolk and egg white dropping out, you see another shell. This type of abnormal egg is technically called a counter-peristalsis contraction. More commonly, though, we call it an egg within an egg.¬†

Finding this abnormal egg is definitely strange, but it‚Äôs not a cause for concern. It happens because the egg stops going through the normal laying process and reverses direction within the oviduct. The egg in reverse is added to another egg, giving you a normal egg within an eggshell. It‚Äôs pretty rare, but it can be caused by stress in the henhouse or just happen for no reason at all.

Once you crack the second eggshell, there‚Äôs no reason why you shouldn‚Äôt eat this type of egg. ¬†

Mud, chicken manure or some other type of debris covers these types of eggs. Eggs commonly get dirty when it‚Äôs raining outside and a hen walks into the nesting box with muddy feet. This type of egg is streaked with debris or has large spots of dirty manure on the egg. Dirty eggs can also happen if your hens roost in their nesting box, using them as a place to sleep, go to the bathroom and lay their eggs.¬†

If your eggs are dirty because of the weather, you‚Äôll want to ensure your hens have a clean nesting box and you check for eggs more frequently. If your hens are sleeping in their nesting box, redirect them to the roost, if possible.¬†

Do you regularly get dirty eggs? It could also be a sign of a problem in your flock. Your hen could have watery droppings they can‚Äôt control, resulting in a mess in the nesting box. Watery droppings can be caused by a virus, something in their food that doesn’t agree with them or something in the water source, such as an electrolyte imbalance.¬†

You can wash dirty eggs and eat them if you‚Äôd like. Some people, though, opt to toss them. Eggs are porous, and although you can‚Äôt see the tiny holes in the shell of the egg, the concern is that some of the debris will have made its way into the egg.

That‚Äôs usually not the case. You‚Äôll know as soon as you crack it whether the egg is spoiled or if it‚Äôs safe to eat.¬†

An egg with no shell is quite a find. You‚Äôll look into the nesting box and see a rubbery-looking egg shape with a clearly visible yolk. If you pick it up and hold it, you‚Äôll find it‚Äôs fairly durable, but there is no eggshell at all.¬†

An egg with no shell, also known as a shell-less egg, is rare. But almost all chicken-keepers will find one at one time or another.

This occurs because the pullet is just starting to lay and its body is sorting out the kinks along the way. It can also be an indicator of a disease or infection. It may be a dietary issue or an indicator that your flock needs more vitamin D or calcium in their feed.¬†

There is no problem with eating a shell-less egg. But you‚Äôll have to cut it open with a knife to access the white and yolk.¬†

When your egg has a shell that feels paper-thin and you could easily pull it open without cracking it, you have a soft-shell egg. This type of egg shows up in nesting boxes looking like it has an incomplete shell or a shell that‚Äôs missing a spot. It might even feel powdery and look as though you could keep wiping until the shell disappears entirely.¬†

A soft-shell egg isn‚Äôt as rare as other types of abnormal eggs. It can happen to a hen that‚Äôs at the end of her laying cycle. It can also happen due to heat or stress. But more often than not farmers who find soft shell eggs in their nesting boxes keep flocks that need an added dose of calcium or minerals.

The first thing you can try? Add oyster shell or ground-up eggshells to their diet.¬†

Eggs with soft shells are generally safe to eat, although you may want to make that decision once you crack it. On occasion, the eggshell could be so thin you have an open spot in the egg. You‚Äôll want to take a good look at it before eating.¬†

Finding blood spots in your eggs is rare, but it does happen. It can occur when blood or tissue releases during the laying process after a blood vessel breaks. This will leave a spot or a streak of blood on the yolk or in the egg white.¬†

Blood spots can happen because of a lack of vitamins in your hen‚Äôs food. It can also be a genetic issue. If a hen consistently lays eggs with blood spots, her pullets may also lay blood-spotted eggs as well.¬†

It‚Äôs up to you whether or not you‚Äôd like to eat an egg with blood spots. Most people will find them a bit off-putting and toss them if there is a lot of blood or the blood looks bright red.¬†

If you find an egg with a line or seam in the shell but it looks like it‚Äôs just below the surface, you may have an internally cracked egg. There may be a ridge on the egg that looks like it‚Äôs been patched or repaired. That‚Äôs almost exactly what‚Äôs happened.

During the egg-laying process, the egg cracked. But when calcification occurred, the eggshell was repaired.¬†

Two-tone eggs look like your hen has decided it‚Äôs Easter and they‚Äôre going to decorate a few eggs for you. One half of the egg will be one color, the other half will be another.¬†

Also called white-banded eggs, it can happen when two eggs touch during the egg development process. The first egg will have all of the calcium required to make a shell. The second egg will look like a shrunken balloon.¬†

Two-tone eggs are usually caused by stress in the flock. The best course of action is to evaluate what could be causing stress and work to make your henhouse happy again. They are generally safe to eat. Some farmers, though, will toss them just in case the white and yolk have been affected during the laying process.¬†

It‚Äôs always an adventure raising chickens, so you shouldn‚Äôt be surprised if your hens lay a few surprises for you once in a while. Abnormal eggs are all part of the process and adventure of keeping poultry.¬†

Out of all the types of abnormal eggs, a lash egg is probably the most concerning. Lash eggs are also called salpingitis eggs. If you find one, your hen is already quite ill.

Eggs like these will look very abnormal. It may have a bumpy, uneven surface, be an odd shape, or have a very thick interior with multiple layers inside. It may look so strange you aren‚Äôt even sure it‚Äôs an egg at all. Often you’ll see pus or some other indicator of infection on the surface.¬†

Salpingitis or egg lash disease is a bacterial disease where your chicken‚Äôs oviduct is inflamed. Your hen has an infection, and that infection is ejected in egg form.

Depending on what type of salpingitis your hen has, it could be contagious to other birds in your flock. It‚Äôs almost always terminal unless you immediately take your chicken to a vet for evaluation or you treat with an antibiotic such as tetracycline.¬†

You shouldn‚Äôt eat a lash egg. And you should be very careful with how you handle it as well. Bacteria can transfer from chickens to humans, so you‚Äôll want to wear gloves when disposing of the egg.¬†

This article originally appeared in the July/August 2022 issue of Chickens magazine.