Learn what makes factory farms different than the farm you keep. 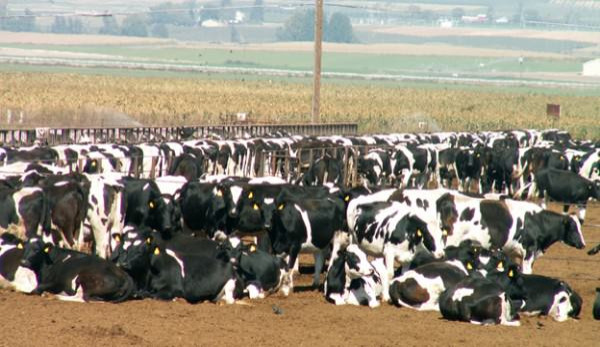 The terms “factory farms” and “factory farming” get thrown around enough these daysâ€”and often in a negative light. For those not familiar with different models of agriculture, it may leave you asking, “What is a factory farm, anyway?”

What Is A Factory Farm?

A factory farm is an agricultural model in which the production of livestock is made to fit into a factory-like system, often heavily populated and indoors. Industrial livestock production can cause severe issues:

Some animals even receive physical alterations, such as the docking of pig tails or the debeaking of fowl, to better fit into the factory-like atmosphere. According to the American Society for the Prevention of Cruelty to Animals, 99 percent of the livestock raised in the United States come from factory farms.

The Effect Of Factory Farms On Animals

Because factory farms seek to pack as many animals into a space as possible, the animals can suffer greatly in the close quarters, often without access to fresh air, grass or sunshine. Disease, mental anguish and premature death are common in these intensive farming operations.

Chickens and Other Fowl

Poultryâ€”from chickens to ducks to turkeysâ€”incur some of the worst abuse in confinement. With laying fowl, it starts with the male birds, which donâ€™t lay eggs or produce quality meat, being culled through gassing, suffocation or even live grinding. Debeaking, a procedure that itself claims the lives of many animals, is often employed to protect against cannibalism.

Once in confinement, the birds rarely leave their cages and are often fed regular doses of antibiotics to promote growth and combat the diseases this confinement encourages. Without room to exercise, laying fowl may suffer from osteoporosis and other related diseases. Laying hens are regularly forced to moltâ€”a cycle in which laying naturally ceases for several weeks and an uneconomical occurrence for a factory farmâ€”through extreme and stressful changes in diet and light exposure, leading to the death of thousands of hens per year.

Although primarily raised outdoors, industrial beef cattle production is just as hard on the livestock as any other type of factory confinement. Often forced to spend their entire lives shoulder-to-shoulder in muddy feedlots, the cattle suffer from many issues ranging from disease to mental stress. These animals may also be surgically manipulated to remove horns.

Dairy cattle, which are often kept indoors, suffer from many issues related to poor air quality, low exercise and overcrowding. Infection of the utter is common, and as with the meat breeds, dairy cowsâ€™ horns and tails often surgically removed. Male dairy cattle are either sent to feedlots or processed for veal (calf meat), which involves weaning the calves from the mothers very early, then tethering or tightly caging the young animals to encourage a more tender product.

Because pigs are such intelligent creaturesâ€”even smarter, in some cases, than canines or chimpsâ€”their mental suffering in confinement can be quite tragic. Their physical sufferingâ€”including respiratory issues from ammonia inhalation, bone issues and poor cardiovascular health from lack of exerciseâ€”only exacerbates their mental anguish. Farrowing crates are tight spaces built to allow for very little movement of the sow as she nurses her piglets, though these are banned in many states. Gestation crates, which are equally small, have been known to restrict exercise to the point in which crated sows are said to have two-thirds the bone density of non-crated sows, leading to broken bones, infections, painful movement and death.

We tend to overlook fish when discussing industrial livestock production, but nearly half of the fish we consume comes from factory farms. Like all factory-farmed animals, they are confined to tight spaces and mistreated, resulting in significant deaths in the fish population. Disease is rampant in fish production, as is animal cruelty. The processing of these animals is often excruciatingly painful and mishandled, perhaps more for fish than any of the above animals.

In most case, factory farms neglect the health and wellbeing of the livestock they utilize by placing profit and productivity over the needs of the animal. In some cases, like chickens, very few laws are in place to protect them from inhumane treatment.

The concentration of animals leads to a concentration of waste. When improperly managed, the waste makes its way into our waterways and air. Methane, a powerful pollutant, is emitted at levels so high that industrial agriculture now produces one-third of our greenhouse gases.

The excessive use antibiotics in factory farming is a main contributor to the increased prevalence of the dangerous drug-resistant bacteria, dubbed “superbugs.” We also ingest these antibiotics in our water and through these meats, which has been said to contribute to obesity. Beyond the antibiotics, factory-farm-raised meats also have been known to contain fecal matter, pus, hormones and fewer nutrients.

According to the Humane Society and the Animal Legal Defense Fund, there are no federal laws regulating the conditions in which farmed animals are raised. In fact, there are often laws being put to the legislature that seek to limit the amount of restrictions that can be placed on factory farmsâ€”so called “ag gag” laws, which seek to criminalize investigations into these farms’ practices.

There are state animal cruelty laws, which may affect the operations at factory farms, but these laws are rarely enforced “due to factors like limited investigation resources, and the fact that most abuse occurs behind closed doors and at windowless facilities,” according the Animal Legal Defense Fund.

What You Can Do About Factory Farms

To use the words of many great writers and thinkers before me, “Vote with your meals.” Factory farms will only exist if there is a demand for them. Eat only grassfed or pastured meat from a trusted sourceâ€”preferably a nearby farmer. Also, get involved with animals rights organizations or a local groups in your area to help on the ground level. Otherwise, look to vegetables and mushrooms for the majority of your protein. Not creating demand is the most direct impact you can make.