Last week was a sad, sad week at our farm. Our elder sheep, Baasha and Dodger, left for sheep heaven on Wednesday and Mom is as glum as can be. 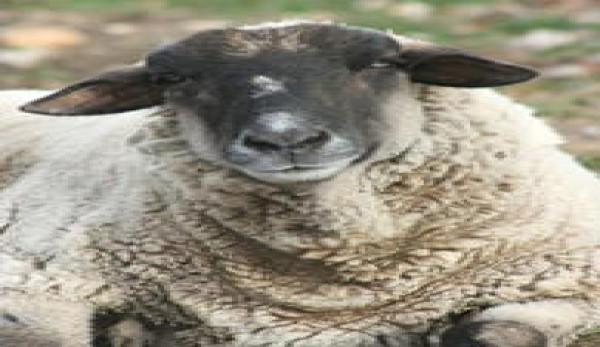 Last week was a sad, sad week at our farm. Our elder sheep, Baasha and Dodger, left for sheep heaven on Wednesday and Mom is as glum as can be.

BaashaĀ would have been 14 soon, so she was a very old sheep. Her legs were badly crippled with arthritis. Dodger had arthritis too.

Baasha was a littleĀ Classic Cheviot and weighed 85 pounds, so when she felt creaky and needed help getting up, Mom could give her a boost.

Dodger was a huge, ancientĀ Hampshire, so he weighed about 300 pounds and Mom could only lift him if he helped. On Monday and Tuesday he did his best but on Wednesday morning he stopped trying and wouldnāt even eat his food. Baasha turned down her food as well. She seemed to know their time had come.

Now thereās an empty place on our farm and in our hearts, but they both lived long and happy lives, each in their own way.

Dodger began life as a 4-H club lamb with a boy in southern Arkansas. After the 4-H fair, Dodgerās boy gave back the ribbon Dodger won and took him home instead of selling him for meat. That was a very nice kid.

Then Dodger became an actor! He and Angel (she lives with us too) were part of the nativity scene in The Witness, a musical dramatization of Jesusā life held Friday and Saturday evenings throughout the summer months down south in Hot Springs, Ark. They did that for awhile (theyāre in the DVD of the musical production), but got bumped by a performing camel. Thatās show biz!

After a year or so of retirement, a nice lady gave them to Mom. Dodger and Angel were Momās dream come trueāher very first sheep!

Mom loved Dodger and Angel so much that after awhile she wanted some registered sheep so she could breed them. She heard of another nice lady selling her last fewĀ Miniature Cheviots, so mom called her up and they talked. The lady sent pictures of her favorite ewe, Baasha. It was love at first sight, so Baasha and Abram (a young ram) moved here.

Baasha never went to a show or set foot on a stage but she had lambs, beautiful lambs, so that all of our little sheep are her descendants. And she was the sweetest, friendliest, most beautiful sheep that ever lived. Her grand lambs, great-grand lambs and great-great-grand lambs will be born this spring.

Stick around; Iāll introduce you to them as theyāre born.