Mom thinks we animals are acting weird. For instance, Ursula, the fat, black ewe, is in passionate love with me. Yes, really! She strolls past 10 grumbling rams to purr and bat her eyes at me. (That's where the phrase "making sheep eyes" comes from.) 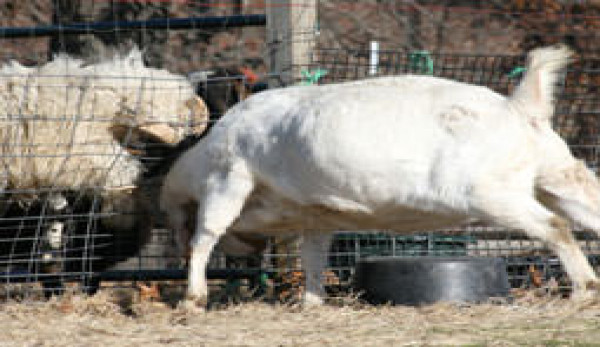 Mom thinks we animals are acting weird. For instance, Ursula, the fat, black ewe, is in passionate love with me. Yes, really! She strolls past 10 grumbling rams to purr and bat her eyes at me. (That’s where the phrase “making sheep eyes” comes from.)Â  That proves I’m a really studly guy, don’t you think? But Mom won’t let me come out to play. That’s because bucks can get ewes pregnant, but the babies don’t survive long enough to get born. We don’t want that to happen here.

And yesterday,Â Salem decided he’s a big, bad, blubbering buck. He’s a 6-year-old wether and he’s never done that before. He parked himself by the ram pen and courted the rams. That made Othello, the Scottish Blackface, really mad. Othello growled and pawed and insulted Salem until they got in a fight. WHAM, their heads smashed the fence! Mom bolted out of the house, yelling, because Othello’s bashing’s already damaged the fence, and then she led Salem away.

Arthur, the ram lamb, is making this yearâ€™s lambies, but he’s acting pretty strangely, too. When Mom puts a girlfriend in his pen, instead of breeding her, first he bashes her around a bunch with his head. That makes Mom mad, so she puts Ursula in with them for awhile (but not while Ursula is in heat because Ursula is taking a break this year). Ursula is a warrior sheep! She knocks Arthur around until he behaves.

But we aren’t the only sheep and goats acting weird! When Mom told her friends at theÂ Hobby Farm Sheep Yahoo group how strange we’ve been acting, a lady who raisesÂ Finnsheep posted this reply:Â  “My ram lamb has been in with his ewes since Thanksgiving Day, and from what I can tell, he has had no interest in them other than to play with them or try to nurse them. He hops and skips about, leaping into the air when the ewes approach him, wagging their tails. Now a Mallard duck has taken up residence in the brook that runs through the pasture and my ram lamb is completely ‘taken’ by him. So, my wethers are chasing the ewes, the ewes are chasing the ram lamb and the ram lamb only has eyes for duck, who because he is the only normal one in the whole bunch really is NOT sharing the love! He is only interested in the girl Mallard and even this should not be happening at this time of the year; it’s too early to nest. I am thoroughly confused! I hope this isn’t some kind of a sign for things to come in 2012. I don’t know if I can take it!”

We’re confused, too. Are your animals acting weird? We don’t know what’s making us crazy. Do you?