Add Radishes, Other Brassicas To Your Cover Crop Mix

Blending old cover crop standbys, like radishes, in new ways can help to protect your soil and fix specific problems. 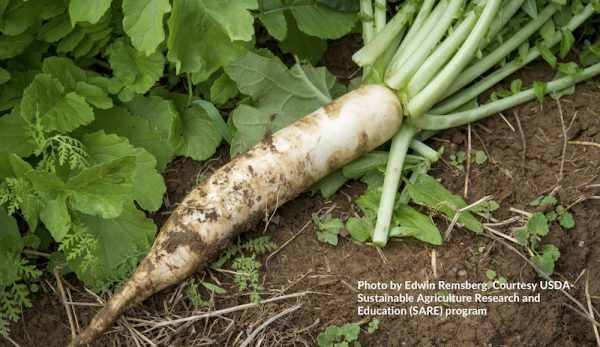 Cover crops might not be top-of-mind for you during late winter or early spring. Still, depending on the state of your soil, you might want to try some even now.

Ivan A. Dozier is a member of the Crop Science Society of America and staff agronomist with IntelinAir, an ag-tech start-up.

â€śIt’s been pretty recently that we’ve gone such long periods of time without having any cover to the soil at all,” Dozier notes. “During the past 100 years of industrial agriculture, that’s when that’s really come about. And cover crops are a pretty natural way to keep that soil covered year-round.â€ť

Besides the usual vetches and ryes, there are several types of specially bred radishes that can work wonders under the right circumstances. Ditto for many other brassicas and old-fashioned varieties like rapeseed, too.

Dozier definitely knows his radishes, and, it turns out, agronomists have developed many different types of radishes with multiple goals in mind.

â€śOne of the reasons the radish has risen to prominence above other varieties is you have that very natural shape to work with from the beginning,â€ť Dozier explains. â€śThen, people have taken that and bred varieties that are very specific toward an application of cover crops.â€ť

Although folks usually plant a radish cover crop in the fall, radishes can still do some good in spring. The crop’s natural drill-like shape can loosen and aerate compacted soils, but that’s not all.

Radishes are powerful biofumigants. In other words? They produce biochemical agents which naturally repel insect pests.

â€śThe radish doesn’t have a monopoly on that,â€ť Dozier continues. â€śCanola is also a biofumigator.â€ť So is the more old-fashioned crop, rapeseed. Japanese beetles detest its high acid content.

â€śNature doesn’t always draw the same lines that we do as humans,â€ť Dozier warns. â€śLet’s say you were in a home garden environment and you are looking for a really good biofumigator, but your neighbor has a really nice pollinator habitat. Or maybe your local farmer has planted a monarch sanctuary [nearby.]â€ť

In those cases? The biofumigant properties of your radish cover crop could clash with efforts to attract beneficial insects. You can lessen the blow by mixing in additional cover crops. Some options include cool-season annuals like oats, peas and clover.

Planting radishes in waterlogged soils or sowing them too thickly can have other consequences. â€śI know some folks who planted radishes once and they never will again,â€ť Dozier recalls. â€śBecause when radishes dieâ€”and that whole field had decomposing radishes in itâ€”it was not pleasant!â€ť

He continues, â€śPart of the reason they got so nasty was that the water level was always so high. The radishes didn’t grow so well and they were rotting while they were still in the ground.â€ť

One of the most common misconceptions about cover crops? â€śPeople view cover crops as a very binary practice,â€ť Dozier says.

â€śIt’s like, I either did cover crops or I didn’t do cover crops. And there’s not as much thought given to, ‘Well, what species did I plant? When did I plant it? How early did I get it in there? How did I terminate them?’â€ť

But how well your cover crops will performâ€”and whether or not you accomplish your particular goalsâ€”depends on each of these considerations. Dozier recommends growers ask themselves, Is this the right cover cropâ€”or mixture of cover cropsâ€”for my soil conditions? And, also, Is this the right time and place to plant this cover crop?

You can keep your soil microbiome active by experimenting with a mix of cover crops. â€śWhy stop at one?â€ť Dozier asks. â€śEspecially if there are multiple benefits that you’re looking to get.

â€śNot only does nature prefer to have plants growing in the soil, but nature also prefers a polyculture,â€ť he continues.

Whatever you choose, knock it back before it has a chance to go to seed or compete with the food crops you want to grow in the coming months.

For small areas? Chop down cover crops with a sharp hoe. In larger sections? You may need a mechanical roller or mower to do them in.