From Flock To Farm: A Chicken-Keeper’s Guide To Adding Livestock

Getting a few chickens can lead to a full flock, which can then lead to a diverse farm with many types of animals. Here are the basics on adding livestock. 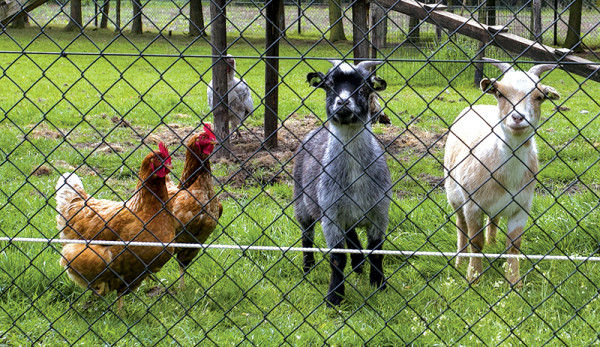 When I refer to chickens as gateway livestock, people often laugh, assuming Iām joking; Iām not. After having chickens for a while and enjoying a bounty of fresh eggs, as well as the free entertainment that they provide, people start to think about adding livestock to their homesteads. They might want their own fresh milk to make cheese, their own wool for spinning or their own homegrown meat. Although chickens typically get along fine with other livestock, here are a few things to consider to make sure everyone stays healthy and happy.

One thing to keep in mind when adding livestock is that they are all prey animals, which means they usually donāt feel secure if they are the only one of their species. This means it isnāt a good idea to have one chicken, one duck, one turkey, one sheep, one goat and one pig.

Plus, different species speak different languages: Goats rear up on their hind legs to butt heads, while sheep put their heads down to ram their opponents when they have a disagreement. Pigs simply bite. Most types of poultry ignore each other, as do sheep, goats and pigs when sharing a pasture.

Many people also worry about disease or parasite transmission between species when adding livestock, but it isnāt overly common. There are some specific cases, but most diseases and parasites are species-specific.

Adding livestock might include other species of poultry. This might seem simple because theyāre also birds. However, there are some significant differences to consider.

Ducks: Other than Muscovy ducks, which spend very little time in the water, ducks should have access to a decently sized pool theyāre able to swim in. At a minimum, ducks need a place where they can dunk their heads regularly so they keep their faces and eyes washed. This might not seem like a big deal until youāve had ducks with your chickens for a few hours: Chickens drink and the ducks will play in water, and together, they can empty a 1-gallon waterer in 15 minutes if they want to. If you have an automatic waterer, you will have an even bigger mess.

Turkeys: Some homesteaders like raising turkeys for holiday meals. Turkey poults initially need a starter feed with more protein than young chickens, but once theyāre a few months old, you can raise them together. If you have heritage-breed turkeys, however, be aware that they might fly into trees to roost at night, so if you want them to go into the chicken coop with your hens, you need to be there near dusk to herd them into the building.

There is a lot written about turkeys getting blackhead disease, aka histomoniasis, when they are housed with chickens, but I have never had a problem with this in 14 years. Chickens can be carriers of blackhead without getting sick, but the disease can kill turkeys.

I used to think that we never had a problem because all our chicks and poults came from certified disease-free hatcheries, and we never took in rescue poultry. But after researching the disease, I realized that because our birds are free-range, they are much less likely to contract it. In fact, blackhead was not a problem until turkey production moved into buildings in the early 1900s.

The pathogen that causes the disease canāt survive outside in the weather, nor can it survive turkeyās stomach acid. Although turkeys can consume earthworms that act as an intermediary host for the disease, the most likely route of infection is fecal-cloacal, meaning that a turkey gets infected if it sits in infected poop. By providing roosts for your turkeys, you greatly reduce the possibility of that happening.

Guinea Fowl: These are popular among hobby farmers adding livestock because they have a reputation for eliminating ticks. Although guineas do have a high need for protein, chickens and turkeys also eat ticks. If you have nearby neighbors, they might not be happy if you get guineas, as the birds tend to be very ā¦ talkative, Iāll say. Many times, my daughter has threatened to never milk another goat if I couldnāt keep the guineas out of the barn at sundown because their chattering was driving her crazy. Guineas are excellent flyers and chose to roost in the rafters or on the roof of the barn, rather than in the chicken house.

These ruminants go great withĀ chickens when adding livestock, as long as you keep their feed separate.

When people say āgoats eat everything,ā they arenāt talking about tin cans, which is a myth. They really mean that goats eat every type of plant, from poison ivy to roses and hedges. They also love grain, so you must be sure that they donāt have access to chicken grain, which can give them diarrhea. In severe cases, it can cause enterotoxemia, goat polio or bloat, all of which can kill them.

Like goats, sheep can get sick from eating too much grain, so you must keep the chickensā feed in an area they canāt access. Sheep arenāt quite as fond of bushes and young trees as goats are, but they canāt be trusted around flower beds.

Because goats can jump, youāll need to have multiple boards or a piece of plywood to block their entry into the coop. You need to figure out how high to place the wood based upon how high they can jump, but assume they can jump at least as high as their head. To keep sheep out of the coop, youāll need to block their access, as you would with goats. Sheepās jumping ability, however, is somewhere between a pigās and a goatās.

Unlike ruminants that get sick after eating too much grain, pigs can pig out and be perfectly fine. Although eating your chickensā grain wonāt make a pig sick, the pig wonāt leave any grain for the chickens, and theyāll probably destroy your chicken feeder in the processāall things to consider about pigs when adding livestock.

Pigs will also happily eat any eggs that your hens lay on the ground or in nest boxes that are within their reach. Pigs can be kept out of your chicken coop if you nail a board across the door about a foot off the ground. Pigs are not good jumpers, so this usually works.

Pigs are omnivores and larger breeds of pigs have a reputation for killing and eating chickens. The smaller breeds, which are usually culled for poor temperament, donāt normally do this. In fact, my American Guinea Hogs will let my chickens eat grain from their feed pans, and my chickens have even been seen walking on my boar when heās laying in the pasture.

When adding livestock, gettingĀ a milk cow or a few feeder calves to a homestead is a fairly advanced undertaking because of the size of the animals, but they get along beautifully with chickens and other poultry. Although cattle mostly ignore poultry, chickens love scratching through cow pies looking for fly eggs, maggots and undigestedĀ grain. In fact, some people use chickens in movable pens to follow cattle in a rotational grazing pattern for this reason. The chickens are moved to the cattle pasture a few days after the cattle so that the fly eggs have a chance to hatch, creating more protein-rich maggots.

Like goats and sheep, cattle are ruminants and shouldnāt have access to the coop because theyāll eat the grain, which could upset their rumen and make them sick. However, they would have to eat a lot of grain for that to be a problem. The bigger issue is that the chickens would be left with no grain.

One hundred years ago, almost all farms were diversified, and chickens lived in harmony with other livestock and vice versa. By arming yourself with a little knowledge, you can successfully add other livestock to your hobby-farm flock.

Tip: Keep Other Animals Out Of Chicken Feed

If you have four-legged livestock, you need to keep them out of your chicken feed, but how do you do that? The simplest solution is to keep the grain in the chicken coop and to keep other livestock out of there. This is also a good idea because if goats or other animals walk under the roosts when chickens are on them, they can wind up with chicken poop on their backs.

If you canāt keep them out of your chicken coop, you can use a hanging feeder and attach it to a pulley. Weāve used this system for years. We leave the chickens in the coop until about 8 a.m. and use the pulley to raise the feeder high enough that the other livestock canāt reach it. Then, we open the coop. This also encourages the chickens to try harder when it comes to foraging for food during the day. When we lock up the other animals in the barn for the night, we lower the feeder so that the chickens can have the grain again. Knowing that they will get grain also encourages them to come into the coop at night.