Battery No More: How To Adopt Rescue Hens

Keepers of rescue hens offer tips and resources on helping abused commercial chickens that have been “put out to pasture.” 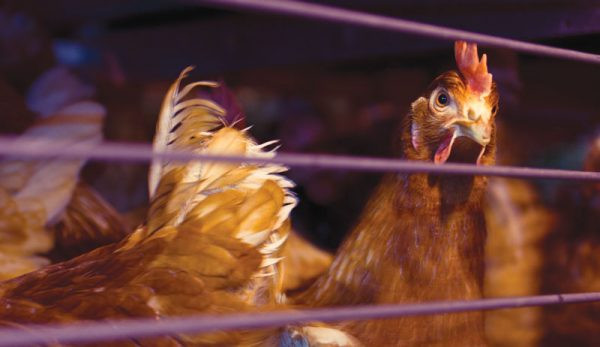 Eggs may be considered nature’s perfect food, but the process of bringing a constant supply of eggs to humans is not so perfect.

The continual increase in population and industrialization, as well as the decrease in self-sufficient living, has brought about many commercial yet less-than-ethical inventions in the food chain. One of which is battery chicken-farming.

Bruce Friedrich, executive director of The Good Food Institute, wrote about battery hens in his article “The Cruelest of All Factory Farm Products: Eggs From Caged Hens” for the Huffington Post.

“Battery cages are small wire cages where about 95 percent of laying hens spend their entire lives,” he wrote. “Each hen is given about 67 to 76 square inches of space (a standard sheet of paper measures 94 square inches).

“To get a sense of a hen’s life in a battery cage, imagine spending your entire life in a wire cage the size of your bathtub with four other people. You wouldn’t be able to move, so your muscles and bones would deteriorate. Your feet would become lacerated. You would go insane. That’s precisely what happens to laying hens.”

While it has existed for a while, there are people who have seen its downsides and felt the urge to help. For some, their way of helping is through rescuing hens from the egg industry and giving them a second chance at a happy, more natural life.

Perhaps you can join the fight?

A battery farming-style of raising egg-laying hens arose in the late 1940s, when researchers found favorable results such as:

That “sounds” great, right? From a production and business standpoint perhaps it does. But from a chicken’s point of view, it’s not something to squawk about.

The not so sunny side up of battery farming is that, in the U.S. alone, approximately 83 percent of layer hens are kept in battery cages. In these cages, they don’t have room to stretch their wings, and to prevent their pecking each other their beak tips are seared off as chicks. They get no sunshine, dust baths or nests to relax in and lay their eggs.

This is their life for approximately 18 months. Then their production declines, making them a financial liability to the farmer, and they get disposed of.

Although hens often take a break from laying and molt during the cold season, the egg industry doesn’t allow this. Instead, they use long hours of artificial lighting to trick hens’ bodies into laying eggs all year.

Forced molting is also incorporated in some operations through starving hens for up to two weeks. Although they have already been bred to lay 250 to 300 eggs per year, these techniques make them lay even more.

Isabelle Cnudde has been a chicken-rescuer since 2014. She currently has five ex-commercial hens.

She is also the founder of Clorofil, a nonprofit micro-sanctuary focusing on farmed animal education and outreach. Here, she gives classes on chicken care and promotes chicken adoption.

“After one of my chickens died, I wanted to add a couple new hens to my little flock and discovered that I could adopt rescue hens just like I did for my dog and cats,” she says.

“This led me to Animal Place, a large farmed-animal sanctuary that rescues farmed animals including hens from the egg industry. Since 2010, they have rescued and adopted out almost 25,000 hens.”

Cnudde started volunteering and eventually going into a battery cage farm with Animal Place. She’s been helping with each of their rescues, focusing mostly on the medical side and rehabilitation prior to adoption.

The biggest thing she’s learned since taking in rescue hens is how amazing they are. She says they are full of life despite the conditions they came from and finds it fascinating watching them discover the world.

“You witness them grow from tiny hens with missing feathers to beautiful birds,” she says. “Their personalities blossom in front of your eyes.”

Cnudde has also noticed that breed doesn’t mean much. A common breed used in the egg industry is the Leghorn.

“White Leghorns are supposed to be skittish and flighty,” she says. “But in my experience, they are the most social birds I have ever had. They are also pretty smart, and I was able to teach a couple of them to peck out a specific card out of a deck of cards!”

Mary Kate Fain is a board member of Species Revolution and has been rescuing ex-battery hens for over a year. She currently cares for one hen named Angie.

The others she’s rescued (17 in the past year) have been rehomed at local sanctuaries—such as Chenoa Manor and Rancho Relaxo—or adopted by other rescuers. Spending time with rescue hens changed her perception of them, and the biggest thing she’s learned since rescuing hens is how unique each one of them really is.

She’s noticed that each hen has its own personality, quirks, likes and dislikes.

“Angie, for example, is incredibly stubborn and wants nothing more than a high perch at night and a warm sunny spot during the day,” Fain says. “And she will do anything to get this.

“The first night we rescued her, she and [another hen we rescued] Coretta were being kept in my spare bathtub while they were healing. Despite the fact that she had never had the room to even flap her wings before, Angie immediately started jumping over the netting we had set up to perch on my hairbrush on the bathroom counter. Her ability to fight for her needs, and drive to do so even after years of trauma, is amazing to me.”

One easy way to find rescue hens to adopt is to get in touch with battery hen rescue groups. A quick online search reveals plenty of results.

Some people rescue their chickens by contacting organizations. Others rescue theirs directly from the farm or a live poultry market or slaughterhouse. Some hens are even rescued after falling off trucks headed towards the slaughterhouse, while others are simply abandoned somewhere.

Battery Cage Hen Rescue USA posts rescue opportunities in the U.S. on its Facebook page. There are also organizations or sanctuaries such as Animal Place, mentioned earlier, where you can apply to adopt rescue hens and other animals.

United Poultry Concerns has a list of farmed animal sanctuaries in the U.S. and worldwide. Get in touch with rescue organizations, online groups or pages, or local farms for more information.

In one of his posts, he shares a plethora of good info for people considering rehoming battery hens. Here is a condensed version of some of his points from a past Facebook post for people interested in getting involved in his chicken rescue:

Rescued battery hens are some of the most amazing characters and overall great birds to own. They need a little more TLC at the start while they learn how everything works. But once they settle in, they can become the best pets you’ve ever owned.

Fain’s tip for people interested in rescuing battery chickens is to make sure your are doing it with the hen’s best interests at heart—not just for the eggs.

“Rescuing chickens is challenging, but the reward of doing so is much greater than a couple eggs could ever be,” she says.

She also mentions that ex-battery hens will inevitably have some health issues—respiratory, reproductive, injuries and infections—and need veterinary care. Finding a qualified vet should be top priority, she says, noting that depending on the hen’s issues vet bills may total up to $1,000, as well as ongoing costs.

She recommends calling different animal hospitals or asking around online in order to find a good avian vet with chicken experience.

“All battery hens are de-beaked, which means that part of their beaks were cut off to avoid them hurting each other in the small cages they live in,” she says.

“It is something you can easily deal with by providing a deep dish and crumbles—instead of pellets—and cutting some of their treats in smaller pieces.

“They look a bit scruffy at first as they broke their feathers rubbing against the cages. But after a first molt they become all beautiful. [They also will] have a shorter lifespan than heritage breeds. We bred them to lay so many eggs that they will most probably die from some reproductive issue.”

According to Alexander Craig, media and communications manager at the American Society for the Prevention of Cruelty to Animals‎, birds—including egg-laying hens—are the animals most urgently in need of protection.

He notes that some states are banning battery cages, and more than 100 retailers and companies have set policies to go cage-free.

The ASPCA’s Shop With Your Heart pledge asks people to choose more plant-based foods and alternatives or animal products with certifications such as Animal Welfare Approved, Certified Humane and Global Animal Partnership Steps 2+.

Another option is, of course, just raising your own chickens.

We may never know for sure what came first, the chicken or the egg. But the love of chickens is something we all have in common. Consider helping out some ex-battery chickens this year and enjoy watching them transform into full-feathered beauties.

Rescuing hens includes introducing them to your pre-existing flock. A post at henrescue.org  has good advice about this as well as good advice on caring for rescue hens. They suggest the following:

Chicken-rescuer Isabelle Cnudde who is also the founder of Clorofil, a nonprofit micro-sanctuary focusing on farmed animal education and outreach, has a few more good tips.

The first step she mentions is the important quarantine period. Rescue organizations often do a health check and quarantine beforehand. But if you rescue directly from a farm, it is important to quarantine the new hens.

Quarantine is when the new chickens are put in an area where they have no contact with the existing flock. This includes no physical contact as well as sight and smell.

They should be quarantined preferably for a full 30 days. This time allows you to spot and treat any possible illnesses or parasites.

Cross contamination should also be avoided through stringent hand-washing and changing shoes and preferably other clothing too between the quarantine area and the preexisting coop and flock.

This story originally appeared in the November/December 2019 issue of Chickens magazine.