A massive breed raised for meat and feathers, the African is a hardy breed of goose. 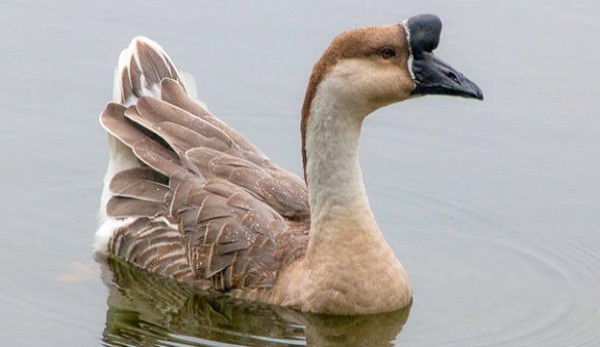 Use: The African goose is one of the heavyweight breeds. They were developed as a meat breed. Commercial meat geese are raised primarily for meat and feathers.

History: The African has been known by various names throughout its history. The African’s origin is not well documented. Africans arrived to the United States in the mid-1800’s on trader ships. Some experts believe it was developed from the Swan goose of Southeast Asia. Brown African geese were admitted in the first American Standard of Perfection in 1874.

Conformation: This large breed is recognized in two varieties, Brown and White although breeders are working on Buff. Africans are massive in appearance with a pronounced knob on their forehead, protruding from their skull at the upper mandible. They also have a well-developed dewlap that hangs below the jaw in both sexes. The Brown African is a beautiful mix of shades of gray and brown with a dark brown stripe running down the back of their neck. The females have the same coloration and shape of the males although they are typically smaller in size. White Africans are completely white in color with blue eyes and orange knob, bill, shanks and feet. The White variety was not admitted into the Standard until 1987. Africans may not have well developed knobs until they near maturity. Standard weights: Old Gander: 22 lbs., Young Gander: 18 lbs., Old Goose: 18 lbs., Young Goose: 15 lbs.

Special Considerations/Notes: Africans are very hardy and are considered the most docile breed of geese by many. Their knob can be subject to frostbite in extreme cold.