What The Peck? How To Deal With Aggressive Chickens

When you find yourself with an aggressive chicken, use these techniques to keep from living in fear. 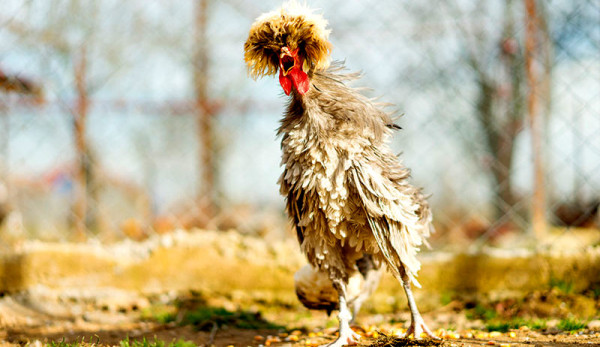 When we were young, my little sister rescued a bantam chick from certain demise. She named the bird Miss Peep and loved her immensely. But before long, it became apparent that Miss Peep was actually Mr. Peep, and beyond that, he was one mean rooster. He would watch for one of us to leave the house and come barreling out of the fencerow, head lowered, spurred legs at the ready. We had no idea why he was such a pill when all weâ€™d ever done was take care of him. This was our first experience with aggressive chickens.

It might sound funny, but a mean chicken is no joke. To reduce the tyranny these birds can impose upon us well-meaning humans and the overall flock, we need to take some defensive steps.

To begin with, â€śmeanâ€ť is a bit of a misnomer. In the chickenâ€™s tiny brain, there is no room for meanness as we understand it. Aggressive chickens, however, might adopt behaviors that humans perceive as mean: pecking the hand that feeds; beating at its opponent or keeper with its wings (called â€śfloggingâ€ť); spurring people, animals or other chickens; and basically terrorizing anything that moves. So defense No. 1 is to recognize that itâ€™s nothing personal.

While aggression is irritating, concerning and at times scary, it can be comforting to realize that chickens put no planning or malice into their actions. When we understand that, weâ€™re less likely to personify aggressive chickens, assigning them ulterior emotion-based motives they are incapable of and viewing them as enemies.

Aggressiveness in chickens can be hormonal, genetic, instinctive or behaviorally reinforced. Some breeds are naturally more aggressive, just as some are better foragers, layers or mothers. (See â€śRead Your Breedâ€ť below.) Within a breed itself, there will be variations. Bantams tend to be gentle, but Mr. Peep was obviously not a good representative of his tiny breed. Roosters can also perceive people as threats to the flock and react protectively.

Think like an alpha chicken. Chickens use pecking and aggressiveness to establish their social hierarchy. In her University of Kentucky Extension article, â€śNormal Behaviors of Chickens in Small and Backyard Poultry Flocks,â€ť project extension manager Jacquie Jacob writes: â€śBy 16 days of age, fighting to determine the pecking order begins.â€ť

Like a Chihuahua fronting up to a pit bull, aggressive chickens apparently have no inkling that attacking people to show them whoâ€™s the boss is not going to put them on topâ€”unless, of course, you back down. Backing down from a chicken is not a good thing to do any more than letting a dog, horse or other animal establish dominance over you. You, or some other less suspecting person or child, could get hurt.

Jacob says that while male and female chickens can attack, roosters tend to be more violent, and by use of spurs, as well as the beak, they can draw blood on unprotected skin. They can be bullies. Hens can also adopt unpleasant behaviors. Sometimes, in a roosterless flock, a hen might adopt a roosterâ€™s protective role, becoming aggressive to people though docile with the other hens.

In my last bunch of backyard hens, I had an escape artist, a homebody and a hen named Kristy, which you had to look at continuously or she would attack with beak, wings and claws every single time. A fox ate her for dinner one night, and we didnâ€™t mourn her. In retrospect, I wondered whether Kristy had appointed herself the token rooster in the group and was just doing her job, protecting her flock.

Know the signs: If a chicken lowers its head and sidles toward you, watch out! Being attacked by a chicken might sound hilarious to someâ€”unless it happens to you. Jacob says that raised neck feathers and wings pointed toward the ground and away from the body are classic attack signals in aggressive chickens. If not turned away, a chicken will flog its opponent and stand very tall before kicking out to engage leg spurs, pecking, jumping at and spurring as they go.

There doesnâ€™t seem to be one foolproof way to deal with aggressive chickens. Some advocate bringing food as a distraction. This has never worked for me, nor has kindness and sweet-talking: Experiences with Mr. Peep and Kristy are evidence of this. Others suggest defending yourself with your boot or a stick, which did cause Mr. Peep to leave me alone, but it didnâ€™t faze Kristy in the least. In fact, some research indicates such methods can make the bird more aggressive, because they view it as a challenge or threat.

Defense No. 4: Go On The Offensive

Regardless of the method, establishing yourself at the top of the pecking order seems to be the best way to deal with aggressive chickens. Perhaps the most humane way to do this is to show dominance similarly to how youâ€™d train a dog.

For chicken domination, at first sign of attack, reach down, grab the bird by the feet, turn it upside downâ€”ignore the squawkingâ€”and tuck it under your arm like a football. If it’s clear that you’ll have this type of showdown, you can wear gloves and clothing you donâ€™t mind bringing in contact with chicken feet and feathers. Then go about your business, holding it until it acknowledges your dominance by ceasing to struggle and holler, which typically takes less than a minute.

Once it does, release it, but watch out. At first it might come right back at you. Every time it attacks, give it more of the same. Ultimately, the aggressive bird might learn to leave you alone, though some just never give up.

Defense No. 5: Remove The Threat

Finally, Jacob cites a doctoral thesis about the social structures of birds, written by Norwegian scientist Thorleif Schjelderup-Ebbe, a zoology student at the University of Oslo in 1921, who coined the phrase â€śpecking order.â€ť

Schjelderup-Ebbe indicated that pecking order relies on recognition, and chickens can recognize as many as 30 individuals. This means that even if your attack chicken learns to give you a wide berth, donâ€™t count on other people receiving the same level of respect. If youâ€™ve got a very aggressive bird, consider removing it from the flock. Options include gifting a friend whoâ€™s up to the challenge or sending it to the stew pot.

Living in fear of attack is not a good option. If you have an aggressive chicken, donâ€™t send your kids out to gather eggs or feed until theyâ€™re old enough to be the dominant force. Show them how to do it, or get rid of the threat. Children have been blinded in chicken attacks.

If you must deal with an aggressive chicken, donâ€™t expect it to appreciate your position as caretaker human or be moved by your kind acts. Be on your guard at all times, establish humane dominance if possible, and if not, send that bird on its way.

Sometimes, we inherit our flocks and take the good with the bad. But if you have the leisure to choose, peruse breed descriptions to minimize the possibility that you end up with an attack chicken in your own flock. In “Choosing the Best Poultry Breed for Your Small Farm,” The University of Maryland Extension advises deciding on your goal for raising chickens as a first step in finding a breed that is best for you, and nonaggressiveness is a factor to consider. Here are 12 common breeds and their basic temperaments:

This article originally appeared in the May/June 2017 issue of Chickens.