Safety Tips For Dealing With An Aggressive Sow

Mother pigs can be fiercely protective. In the end it's a good thing, but you do have to be careful around an aggressive sow. Here's how. 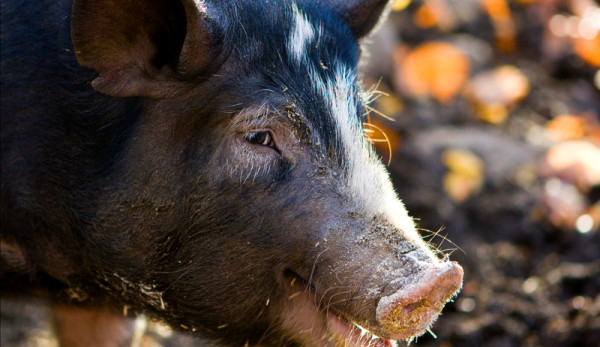 A couple of weeks ago, my wife and I looked at the piglets frolicking in the pastureÂ and decided: It was time to cut. Which is to say, we’d put off castrating the males long enough and were at risk of letting them get too strong to effectively wrangle for a deeply unenjoyable task. (This article, by the way, is not about castration â€” it’s about the catching that comes first and dealing with what might be an aggressive sow.)

In our handful of years as owners of breeding hogs, we’ve gotten somewhat adroit at catching pigs. (If you’ve ever tried to wrangle a piglet, you know how empty that claim is.) We’ve installed a heavy metal gate in the farrowing barn that chains to a post to divide the barn into two. Another gate swings closed to keep pigs in the pasture on the outside of the barn. I built an escape door in the back of the building a couple of winters ago.

Why all the gates? Because we’ve got a mean mama.

The Danger Of An Aggressive Sow

Now, when people say “aggressive sow,” they can mean two different things. The first is an arguably incompetent mother prone to attacking and killing her offspring. What you do with a pig like that is up to you, but I’d personally be disinclined to keeping her around.

The second kind â€” the kind of aggressive sow we own â€” is a fierce protector of her babies who poses a risk only to those who pose a risk to her piglets. This kind of aggressive sow can tear up a barn and try to climb a metal fence despite her 700-pound body when she hears her babies start squealing at the handling of well-meaning young farmersâ€”I know because I’ve seen it, and the image is burned into my brain. Which is why, when one of our helpers forgot to lock the first gate the other day and I saw our mean mama rush into the barn after us, my wife and I utilized that escape door with a pointed urgency.

I know farmers who can grab a squealing piglet from their sow’s teat without incident. Good for themâ€”I’d be minus a hand and maybe more if I tried that. But, for all the planning and worrying we have to do when it comes cutting time, I wouldn’t trade our mean mama for a passive pig, because thatÂ mean mama is a really great mother.

When Protective Pigs Are Best

If you’re releasing piglets into aÂ pastureâ€”or your sow delivers outsideâ€”you might want this kind of aggressive sow too. Why? Because, while pigs are generally known for deterring predators with their mere presence, a field of baby pigs can prove an irresistible temptation for a wily fox, loose dog or other four-legged hunter. And when a hungry predator makes its way into the pig pasture, you don’t want a sow that’s impassive to a piglet being taken from her teatâ€”you want a sow that tries to climb a gate to protect her babies.

In my studies of pig breeds (call it a hobby), I’ve noticed that “protective mother” and “heritage breed” tend to go together, which makes senseâ€”pigs better suited to pasture need to be able to protect the babies they take into the grass with them. And as a keeper of purebred Berkshire pigs, I’ve been told by farmersÂ more than once they won’t raise the breed because the mamas are so mean. I get itâ€”I’ve seen murderous rage in our sow’s eyesâ€”but I believe this type of aggressive sow worth keeping. You just have to be careful.

If you breed pigs, you’ll need toÂ handle piglets, whether it’s to cut wolf teeth, administer vaccinations, castrate or just give them a once-over to ensure health. If you’ve got an aggressive sow, my best advice is to plan ahead: Develop a system where you can separate your sow from her piglets, locking the mama safely away from you while you gather up the little ones for whatever task you need to perform. Chained livestock gates are excellent barriers, as are wooden gatesâ€”just make sure whatever you’re using is heavy (a pig can lift impressive weights with its snout) and, you know, locked before you get those piglets squealing.

Be aware that the mean mama type of aggressive sow is just a female pig under the influence of her naturally released post-partum hormones: She might want to kill you today, but she still loves you.

Finally, keep in mind that a sow can hold a grudge. The morning following our first time castrating, I tried to pet our sow, as I did every morning, and found my glove inexplicably inside her mouth. She didn’t pierce the gloveâ€”it was just a warningâ€”but I considered the lesson learned. Which I why, just the other day, when she chopped at me during morning chores, I knew what she meant: She remembered. And that’s OKâ€”her piglets danced around her hooves, safe in the protective shadow of their mother.

“Good job, mama,” I said, as I poured a bucket of food out for her.