Dioscorea bulbifera, the air potato, can grow as much as 8 inches in a day. It has been used in herbal remedies to treat dysentery, diarrhea, sores and tumors. 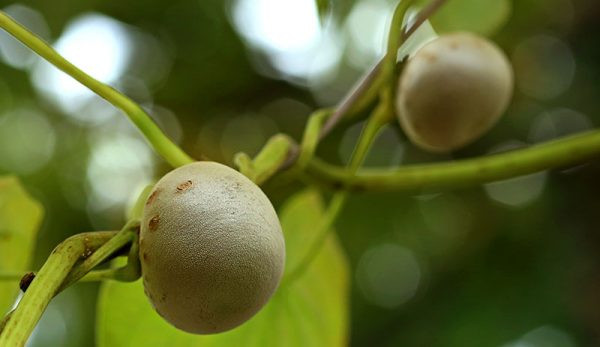 A new (to me) weed is taking root in my backyard as well as a community garden I tend. Itâ€™s a vine with heart-shaped leaves and small growths that looks like galls or bumpy little nuts. The rarely seen flowers of the plant are tiny white blossoms that dangle in groups. But it doesnâ€™t really need those flowers because it regenerates itself more efficiently with those tiny potato-looking things. Meet Dioscorea bulbifera, or the air potato.

Dioscorea, a Name to Remember

Introductions begin with names. The genus and family name of the air potato come from the ancient Greek physician Dioscorides.

Pedanius Dioscorides wrote De Materia Medica, which has influenced every herbal since the first century AD. What he preached is somewhat of a lost connection with understanding a plant in every season of its growth. Dioscorides wrote, â€śFor he who is only present at the budding of the herb cannot know it when it is full-grown, nor can he who hath examined a full-grown herb, recognise it when it has only just appeared above ground.â€ť De Materia Medica describes not only characteristics of each plant he studied, but also their medicinal qualities and uses. This work was so important that it was translated into at least seven languages and was the best-known pharmaceutical handbook for 16 centuries.

Dioscorides didnâ€™t describe the air potato, which was discovered and named after his lifetime, but the entire family of yams was named for him. If he had found this â€ścheeky yam,â€ť as some call it, he would have provided the folk remedies in use at the time, including those for treating dysentery, diarrhea, syphilis, sores and tumors.

In India and China, the air potato is an important and much-studied therapeutic plant, with many different cultivars used in traditional medicine. In the tropics, varieties have been cultivated as a food crop for centuries.

Here in the U.S., Dioscorea bulbifera was included in a U.S. Department of Agriculture publication on alternative cash crops in 1993, taking into consideration the toxicity of the plant as well as its edibility. The air potato might be a type of wild yam, but that doesnâ€™t mean you can eat the tubers of the wild, uncultivated plant. They contain steroidal saponins, powerful constituents that are used to synthesize cortisone and human sex hormones in laboratories. Eaten raw or even cooked, the tubers could be poisonous. There is a native North American wild yam with much lower saponins, Dioscorea villosa, which is at risk of becoming endangered because of overharvesting, especially in Appalachia.

Continuing with the introduction, the second name of the air potato tells us something about those little knobs that characterize this particular species.

Air potatoâ€™s tubers and tendrils are only part of the reason these exotic invasives grow vigorously enough to choke out entire trees in a short time. They also spread through the bulbils found in leaf axils, as seen on many lily species. Garlic and onions produce bulbils too, but theirs are found at the tips of their long leaves. Air potato bulbils resemble miniature spuds but are actually modified branches that are aerial tubers. Tubers underground and bulbils in the air serve the plant as food-storage spaces and as reproductive organs. Grabbing a vine to rip it out of the ground sends the bulbils flying and disperses the seed, even though itâ€™s not really a seed. Nevertheless, even a tiny bulbil that falls to the ground is a new plant waiting to sprout up and out.

Itâ€™s hard to believe that these invasive exotic plants are still sold commercially as ornamental vines, even though Florida has a task force assigned to battling the weed. Members of this task force have to move fast to keep up, because air potato vines have been reported to grow as long as 8 inches per day and as long as 150 feet in length. The air potato is one of four exotic species in the Dioscorea genus, all of which have prolific bulbils. The two native species do not. This document by the Florida Exotic Pest Plant Council includes a good visual guide to tell them apart. One thing to look for is the left-twining habit of how the vine creeps upward.

Dioscoridesâ€™ advice to really understand plants by observing them in all seasons is especially important for a plant like Dioscorea bulbifera. It looks similar to a native plant that would benefit from habitat protection; experts provide confusing and conflicting information about its edibility and toxicity; and itâ€™s healing secrets might be well-known on the other side of the world but here in the U.S., the air potato is yet to be appreciated for its unique pharmaceutical potential.

As I was researching the air potato, I shot some video of it (or so I thought) in the community garden, where it was taking over the gooseberry shrubs. I assumed it was air potato: That was the simplified answer I found in one of my weed books, and I yanked it all out and tossed it in the compost. When I review my video clips more closely, and really look at it, I see differences and doubt this is Dioscorea bulbifera.

The leaf is more pointed than a typical heart shape, and the vine twines to the right. This might be a different species, either D. alata, or D. polystachya. They both have bulbils but twine the opposite direction of the air potato. If it is D. polystachya, or the Chinese yam, it has been cultivated and is more likely to be edible. Just the same, I still donâ€™t want it covering up the gooseberries.