Climate change is affecting the way Alaska farmers grow food. There are benefits, but the change also highlights local concerns. 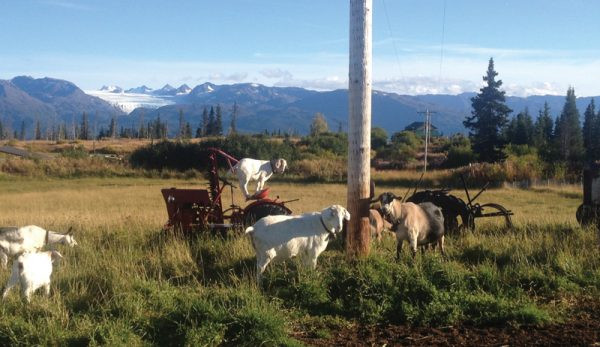 Describing the effects of climate change for growers in Alaska can be as vast as the 600,000 square miles the state covers.

Photos of starving polar bears, retreating glaciers and small villages swallowed by coastal storms fill the national news. Though, for most Alaskan farmers and gardeners, those events are hundreds if not thousands of miles away.

But thatâ€™s not to say that Alaskan growers arenâ€™t affected.

According to Rick Thoman, climate scientist at the University of Alaska Fairbanks, those effects are longterm. The Universityâ€™s Experiment farmâ€™s 109 years of weather information show that this past summer (2019) was the farmâ€™s third-longest growing season.

Thoman also reports that the growing season at the farm has lengthened by three weeks over the past 49 years, from 1970 to 2019.

The University of Alaska Extension Service describes those changes as a longer growing season and a longer period of frost-free days.

It also means soils warming earlier and winters (at least in central Alaska) that are warmer and wetter.

All this could promise of a wider variety of crops or higher yields for the crops Alaskans grow.

Here are some ways you can curb climate change with your own garden.

Four hundred miles south of Fairbanks on the Kenai Peninsula, Kyra Wagner, district manager of the Homer Soil and Water Conservation District has a different take on Alaskaâ€™s climate change.

â€śIt is safe to say that the biggest change in agriculture on the peninsula has little to do with climate change,â€ť she says. â€śThe biggest change has been the high tunnel program through the Natural Resource Conservation Service cost-share program helping farmers pay for high tunnel greenhouses.â€ť

Wagner doesnâ€™t feel that climate change is driving this surge, â€śItâ€™s simply driven by a desire to have reliable food production, either for the family or for sale,â€ť she says.

Alaskans have a tenuous food supply. Ninety percent of the stateâ€™s foodstuffs are imported by barge or truck from the Lower 48.

â€śIf one of these volcanoes erupts again or there is an avalanche that closes the road for a few days, we have empty shelves in the grocery store within three or four days,â€ť she says.

This shift to high tunnel agriculture is not without risks. â€śMany of the farmers who thought they had reliable water sources saw those water sources dry up last summer,â€ť Wagner says. â€śNatural springs here tend to be shallow, and we do not have deep aquifers like they have in the Midwest.

As Alaskan growing seasons change, some crops will do better. â€śWe are seeing farmers grow trees outside that normally struggle here,â€ť she says. â€śYou are seeing many more apples in the farmers market on a regular basis. But you have to keep in mind that most of our agricultural plants are annuals, not perennials. Climate effects are long-term, and long-term warming doesnâ€™t change the life of a vegetable plant that only lives a few months.â€ť

Longterm residents Bobby and Harold Jackson own Jackson Gardens outside of Soldotna, Alaska. They are noticing the changes.

â€śMy family moved here in 1962, and weâ€™ve had our gardens since 1975,â€ť Harold says. â€śEvery year is a bit different. People have two or three good years then we get a year or two that are not good growing at all.â€ť

Overall, he has noticed a general trend. â€śOur growing season starts a little earlier than it did and runs a little longer,â€ť he says.

The 2017 USDA Census of Agriculture shows the number of Alaskan farms has increased 30 percent over the past five years. Those farms are smaller and more diversified, with younger farmers and more women involved in farm decision making.

The local borough is also looking at changes in climate and agriculture. â€śIn our land-use department, we are looking for uses for our lands besides residential,â€ť says Marcus Mueller, Kenai Peninsula Borough Lands Manager.

â€śThe borough owns about 130,000 acres. We have identified 4,000 of those acres for sale as agriculture.â€ť

Mueller feels the trends in agriculture are good for the area. â€śWe have had 10 years of success with these high tunnel greenhouses,â€ť he says. â€śThey have shown we can grow a variety of crops at scale. This success has pushed people to think of what to do with their excess.

“The market infrastructure is the hardest part. There has been a big increase in farmers markets. But we are just beginning to see local produce year-round in supermarkets.â€ť

Mueller feels Alaska may find additional effects of climate change. â€śIf someplace like Phoenix becomes too warm to live, Alaska will become somewhat of a climate refuge,â€ť he says.

â€śThere are winners and losers with change. You just have to learn to do with what you got.â€ť