An unusually dry season is causing boron deficiency in Illinois crops. Take steps to assess your crop if you notice the symptoms, too. 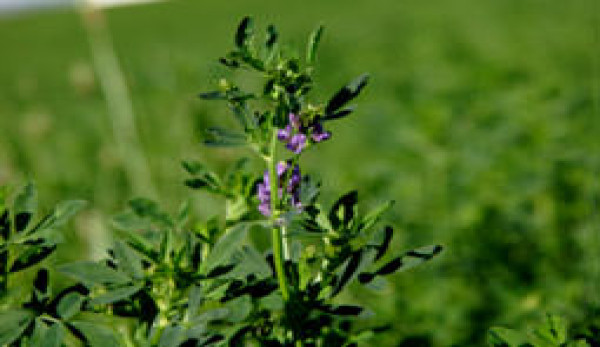 In Illinois, alfalfa plants are the targets of a problem that might be deceiving to a farmerâ€™s first glance. The alfalfa leaves are turning a reddish-yellow in the top new growth of the plants while the older leaves remain green. At a first look, it appears the plants have leafhopper damage, but that occurs later in the season. What the alfalfa plants are actually suffering from, according to FabiĂˇn FernĂˇndez, assistant professor of crop sciences at University of Illinois, is boron deficiency.

“An easy way to distinguish between the two problems is to look for flowers,â€ť FernĂˇndez says. “Alfalfa will flower if the problem is caused by leafhoppers, but probably will not if it is due to boron deficiency.â€ť

However, itâ€™s unusual to see symptoms of boron deficiency this early in the growing season, FernĂˇndez notes. The problem usually appears on the second or third cuttings of alfalfa, especially during drought periods.

“I suspect that the reason we are seeing boron deficiency in some fields so early this growing season, especially in sandy soils that have lower capacity to retain water, is that it has been unusually dry,â€ť he says.

Also referred to as “yellow top,â€ť alfalfa boron deficiency occurs most commonly in sandy soils that are low in organic matter or have a high pH. Often, boron deficiency appears during drought conditions because the lack of water reduces the capacity of organic matter to release it. Boron does not translocate easily in the plant, which, FernĂˇndez explains, causes the leaf discoloration.

If boron deficiency is suspected in an alfalfa crop, there are several ways to investigate the problem:

If the investigation shows that remedial action is needed, boron should be applied. UnlessÂ soil tests also show marginal concentrations in areas with no visible deficiency symptoms, the application should be restricted to the affected area, not applied to the entire field. A possible strategy is to apply 30 pounds per acre of household borax, which contains 3.3 pounds of boron.

If the field needs other nutrients, such as phosphorus or potassium, it might be easier to mix this small amount of boron with the other fertilizer.

The only caution is that if oats accompany alfalfa during establishment, the boron application should be delayed until after the first year to avoid toxicity problems for the oats. Similarly, to avoid boron toxicity in corn, it should not be applied to alfalfa during the year prior to corn planting. Finally, if a foliar treatment is preferred, a rate of 0.1 to 0.3 pounds of boron per acre is normally enough to correct the problem.