A nonprofit group, The Sock Brigade, collects alpaca socks as gifts for soldiers during the cold season. 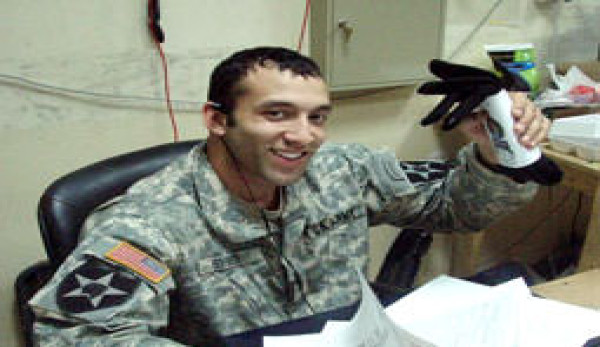 When Barbara Coleman asked her son, Army Sergeant Micheal L. Coleman, what he would like in his next care package to Iraq in January 2007, his request was simple: alpaca socks.

Mike went on to explain that since the troops were on their feet all day and had to withstand freezing temperatures at night, he would appreciate as many pairs of socks as she could send so that he could share the comfort of alpaca socks with his platoon.

Barbara and her husband, Randy Coleman, own Wings & A Prayer Alpacas in Amity, Ore., so the request was one she could easily fulfill. The Colemans sent out a plea toÂ alpaca farms across the country for the 24 necessary pairs of socks to provide a pair for each member of Michaelâ€™s platoon. In a short time, more than 1,000 socks were donated.

Through the BentStar Project, Ltd., a California nonprofit originally formed to further public awareness ofÂ  the efforts of recovering POW/MIAs, the Sock Brigade has shipped more than 9,000 pairs of alpaca socks to deployed troops, and that number continues to grow.

For the past two years, the primary supplier of the socks has Creekwater Alpacas in Georgia. This year alone, more than 100 farms, individuals and groups made financial donations to the cause.

Why Alpaca Socks?
Because of its soft texture, alpaca fiber is sometimes compared to cashmere. Making the fiber even more coveted, it has the luster of silk. Alpaca is 1/3 the weight of wool, yet just as warm, ensuring warm feet for the soldiers during the cold desert nights.

Containing no lanolin, alpaca fiber is also naturally hypoallergenic. Most people who are sensitive to the itching or irritation they feel from wool find that they can wear alpaca fiber because it is smooth. Additional performance characteristics include: stretch, water repellency, and odor reduction. For travelers, clothing made from alpaca is desirable because it is wrinkle-resistant.

According to Barbara Coleman, the amount of fiber from one alpaca can vary drastically depending on the size of the animal.

â€śWe have a very fineÂ Huacaya alpaca female, with a super-low micron, who shears about 1Â˝ pounds of her prime blanket fleece. We also have a Suri female who sheared over 9 pounds this year,â€ť she says.

However, she estimates that on average an adult alpaca will produce 3 to 5 pounds a year.

â€śGiven the weight of a pair of our Creekwater socksâ€”less than 3 ouncesâ€”there are plenty of pairs of socks to be made from any given alpaca in an annual shearing,â€ť she says.

How You Can Donate
The Alpaca Owners and Breeders Association has partnered with the Sock Brigade to help give soldiers warm feet, and more importantly, the reminder that they are not forgotten.

For more information about how you can help, visit the AOBA website.