Alpacas And Llamas: What They Are & Why You Should Keep Them

Cousins of the camel, these long-necked animals can add a dose of fiber and fun to your farm. 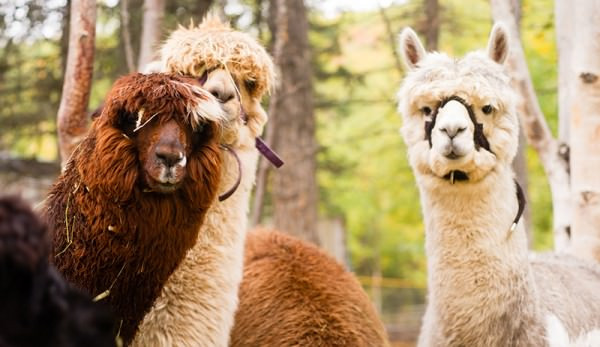 When it comes to our favorite types of nontraditional livestock, my brother and I┬Āare of two minds: Dan thinks emus are awesome (and he loves the look of those amazing green eggs), while I┬Āhave a penchant for camels. Of course, camels arenŌĆÖt exactly common here in North America, but if youŌĆÖre searching for a nontraditional fiber source, a unique pack animal, a livestock guardian or even an unusual companion animal, two members of the camelid family ŌĆö┬Āalpacas and llamas┬ĀŌĆö might just fit the bill.

Alpacas and llamas are members of the Camelidae family, which also contains two-toed (nonhoofed) animals, such as classic one-hump desert camels and rarer two-humped Bactrian camels. Alpacas and llamas are native to South America and were domesticated by pre-Columbian cultures and raised there for thousands of years. In fact, they are still used there today. Llamas were introduced to the United States around 1900, but alpacas were not imported until 1984 due to importation restrictions.

If youŌĆÖre new to camelids, youŌĆÖre likely wondering what the differences between alpacas and llamas.┬ĀThey are indeed two distinct species, and there are quite a few variations between them.

Being camelids, alpacas and llamas do share some common traits.

Coats of Many Colors

The International Lama Registry is a nonprofit that maintains an official genealogical registry system and research services for owners of subspecies of the genus Lama, which includes the llama (Lama glama), guanaco (Lama guanicoe), vicuna (Lama vicugna) and cross-breds. It recognizes 15 colors of llamas: white, cream and black, as well as dilute, medium, and intense shades of brown, red, gray brown and gray. Additionally, the AOA recognizes four leg color patterns, 12 head and neck color patterns, and 20 body color patterns.

Far from being ornamental creatures, camelids are surprisingly versatile and useful in many different ways. In some countries, they are even used as a source of meat, but in the United States, they are mainly used for fiber or as pack animals, livestock guardians and companion animals.

Llamas and alpacas are both used for fiber production, but the alpaca is the true champ in this area. ItŌĆÖs actually their primary use, and itŌĆÖs easy to see why. Alpacas sport an incredibly soft fleece that is highly prized for being very strong, yet is surprisingly lightweight. ItŌĆÖs also long-lasting and very warm, and many people claim that itŌĆÖs warmer than sheepŌĆÖs wool.

Alpaca fiber is hypoallergenic because it contains no lanolin, but this also means that itŌĆÖs not water-repellent. Alpaca fleeces were used to clothe the royalty of pre-Columbian societies, and itŌĆÖs no surprise that the fiber is still valued today. Plus, unlike some of the other fiber-producing animals, alpaca fiber is found in an amazing selection of colors. It can also be dyed if desired.

ŌĆ£Alpaca fiber is fairly easy to market because of its unique qualities,ŌĆØ Potter says. ŌĆ£It is soft, lightweight, warmer than wool, wrinkle and odor resistant, and it wicks moisture. Unlike wool, alpaca is lanolin free and can be cleaned and processed without harsh chemicals, and the lack of lanolin minimizes the likelihood of allergic reactions to those who are sensitive to wool.ŌĆØ

There are two types of alpacas: the popular Huacaya and the less-common Suri. Huacayas have very fine fiber similar in appearance to sheep, while the Suri has an interesting long coat that forms long twisting cords.

Despite their double coat, llamas produce far less fiber than alpacas, and itŌĆÖs generally of lesser quality. This is because alpacas were bred specifically for fiber production while llamas were bred for other purposes. However, fiber production is still another viable use for the llama. In either case, fleeces are shorn once a year.

ŌĆ£I believe that the fiber market is the future of the llama industry,ŌĆØ says Debi Garvin, who serves on the board of directors for the International Lama Registry. ŌĆ£We now have a nationwide llama fiber cooperative that markets 100-percent llama products. Although alpaca is readily available, quality llama fiber is a hard find.ŌĆØ

Garvin suggests that small-scale farmers have their products processed or market them locally at fiber shows. ŌĆ£The key is developing a niche market,ŌĆØ she adds.

The fiber of alpacas and llamas is considered to be luxury fiber, in the league of cashmere and angora. Fleece shows are often held in conjunction with llama or alpaca shows, and the fleeces are judged against a wide range of criteria that varies depending on the specific species and breed of fleece. Generally speaking, some of the primary criteria include density, luster, fineness, uniformity and cleanliness.

While theyŌĆÖve never achieved the popularity of oxen or horses, llamas have been bred and raised as pack animals for thousands of years, helping their owners transport loads through the Andes Mountains in South America. Today, many weekend adventurers, backpackers and campers have discovered the fun of a pack llama.

A good pack llama is easy to train, calm and relaxed on the trail, and happy to trek at a leisurely pace. An adult llama in good condition that has been properly trained for packing can carry approximately 25 to 30 percent of his body weight, or around 100 pounds. The smaller alpaca isnŌĆÖt really suited for heavy loads.

Alpacas are herd animals that enjoy and require companionship of multiple alpacas, and this companionship is important to their health and happiness. Llamas, however, are more independent, so a farmer looking to own just one or two animals might do better with a llama. One benefit of this independent personality is that llamas can make excellent guardians for other smaller livestock.

Many livestock species are accepting of a llama guard, and they sometimes adapt to a llama more quickly than, say, a guard dog. Likewise, many guard llamas become socially attached to their herd, particularly if itŌĆÖs a single llama, so this presents a desirable, mutually beneficial relationship.

Llamas excel at deterring canines from bothering livestock. Depending on the llamaŌĆÖs personality, it may attempt to threaten the intruder by approaching it, or it may lead the animals itŌĆÖs protecting away from the area. While llamas are capable of kicking, they canŌĆÖt really be viewed as an attack animal, but more of a vigil or warning system that reliably sounds the alarm at the sign of potential danger. The alarm sound is loud and hornlike, but wary llamas can also hum or click.

You can use a gelded male or an adult female llama as a guard animal. Gelded males were more common in the past but either option is viable. While you probably could use a single alpaca as a guardian animal, itŌĆÖs not as common as using llamas.

DonŌĆÖt forget about the simple enjoyment value of these animals! Alpacas and llamas are interesting, often affectionate, and sometimes amusing animals that give their owners plenty of pleasure on a daily basis.

Llama fertilizer is one of the best out there for your gardens. ŌĆ£It wonŌĆÖt burn the plants and can be used directly in flower beds,ŌĆØ Garvin says.

Alpacas and llamas do not necessarily require much land. An acre or soŌĆöwith proper shelterŌĆöcan support about four llamas and approximately eight alpacas. While cold temperatures are generally not an issue, camelids donŌĆÖt do particularly well in overly windy or wet conditions, so itŌĆÖs critical to have a place for them to stay dry when the weather is inclement.

Camelids also need a shady place for hot summer days. Shelter doesnŌĆÖt have to be elaborate, though it does have to exist. Many farmers use three-sided shelters for their animals, though a larger barn with stalls and a hallway to work in will certainly be helpful.

ŌĆ£Keep in mind the native environment of these animals,ŌĆØ Garvin says. ŌĆ£Although [llamas] are perhaps one of the easiest species of livestock to raise, they need room to be llamas and plenty of room to graze to keep parasite infestations down. Llamas do not like to be confined and only will go to a shelter if the weather is really bad or hot. Obviously, in most parts of the United States, shelter from the heat is probably more crucial than from the cold and these animals can heat-stress very easily. Plenty of shade is essential and if you have a ŌĆśwading pondŌĆÖ area where they can get in and get wet, that also helps.ŌĆØ

As herbivores, the diet of an alpaca or llama is comprised primarily of grass or hay, though concentrated feeds are often used in conjunction with a grass-based diet. High-quality grass hay is preferable to alfalfa, which is too rich to be fed to alpacas and llamas in anything but small amounts.

Mineral supplements are also important, especially for lactating females. As with all livestock, a steady supply of fresh, clean water is absolutely essential. Your camelidŌĆÖs exact diet may vary depending on individual circumstances, including your location, and should be tailored to your region.

Immunizing a camelid is important, but, unfortunately, camelid-specific vaccinations have not been developed due to the relatively small populations of these animals. Instead, vaccines designed for other large livestock are used as a best option, and while seemingly effective, have not been fully studied in alpacas or llamas. Work with your local vet to choose the proper vaccines; some vaccine possibilities include tetanus, Clostridium perfringens types C and D, and rabies.

There isnŌĆÖt a universally ideal plan for controlling internal parasites in llamas and alpacas, but most farmers use a combination of multiple deworming products along with fecal testing and general pasture hygiene. Alpacas are helpful here, as they naturally gravitate toward using communal manure piles, keeping parasites low.

As with vaccinations, itŌĆÖs best to seek advice from a veterinarian to help you develop a parasite control program specific to your farm and situation, which prevent you from causing more harm than good with a less-than-ideal deworming program.

Alpacas and llamas need to have the pair of toenails on each of their feet trimmed several times a year. The appropriate frequency of trimming varies greatly and depends on how much exercise the animal gets and the surfaces they walk on; harder surfaces tend to naturally wear down the toenails faster and allow more time between trims, and vice versa. Pruning shears are popular tools for trimming, and for hard toenails, a hoof nipper is a good choice.

While youŌĆÖre in the mood to trim things, be sure to check with your veterinarian to determine if your camelidŌĆÖs teeth need trimming. While this is a procedure that you can likely handle on your own once you have experience, youŌĆÖll want to obtain a vetŌĆÖs advice and recommendations first.

Could there be a camelid in your future? Potter loves raising alpacas because they are environmentally friendly, inquisitive, safe and pleasant to be around, and they produce soft, luxurious fleece which can be turned into yarn, apparel, blankets, rugs and other products.

ŌĆ£Llamas are a wonderful exotic livestock breed [and] are affordable in todayŌĆÖs economy,ŌĆØ Garvin says. ŌĆ£Due to their majestic nature and regal personality, they bring a sense of calmness to anyone around them. There is probably not a better, more versatile animal to have on a small acreage.ŌĆØ

Samantha Johnson co-wrote this article with her brother, Daniel Johnson. They have collaborated on several books, including How to Build Chicken Coops (2015).

This article originally ran in the July/August 2016 issue of Hobby Farms.