Amaryllis: A Gift that Keeps Giving

I've discovered that getting an amaryllis to bloom year after year is part art and part science, but it's a plant gift that can continue to bring joy to its recipient for years to come. 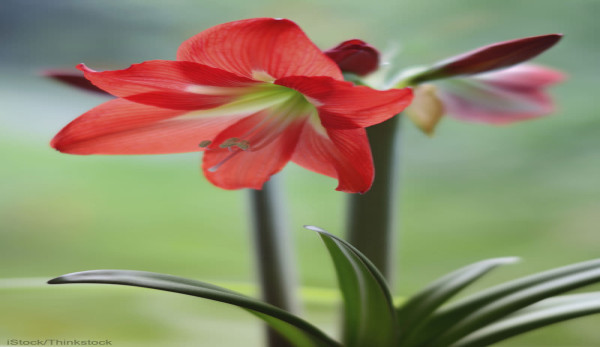 I’ve discovered that getting an amaryllis to bloom year after year is part art and part science, but it’s aÂ plant gift that can continue to bring joy to its recipient for years to come. I’ve experimented with reoccurring amaryllis blooms quite a bit, and I finally think I’ve got it down to a science. If you’re interested in getting yourÂ amaryllis to repeat its show every year, here’s how.

The process actually starts when the flowers die off. The goal is to mimic the plantâ€™s native conditionsâ€”itâ€™s a tropical plant that enjoys warm, wet weather through most of the growing season followed by a short, dry period. Itâ€™s this short, dry period that initiates a new bloom. Hereâ€™s how to best imitate those natural climactic changes.

To best imitate those natural climatic changes, put the amaryllis somewhere cool and out of direct sunlight while itâ€™s in flower to prolong the flowerâ€™s life. The soil should only be as moist as a wrung-out sponge. After the plant flowers, cut off the flowering stalk, but let the leaves alone. It might or might not produce another flower stalk at this point.

Your goal from this point on is to grow big, healthy green leaves that will eventually serve to fatten the bulb and aid in producing next yearâ€™s flowers. While the amaryllis is indoors for the winter and after the flowers have finished, keep it in the brightest location you can. A grow light would be a nice extra, but a super-sunny, south-facing window is fine. Water it regularly, and fertilize it monthly with a diluted liquid kelp emulsion. Allow the leaves to grow as big as they can.

When the weather breaks in the spring and the danger of frost has passed, move the amaryllis plant outdoors by either planting it into the garden or putting the pot on a patio or deck. Morning and late afternoon sun are best. Continue to water it regularly (which should be daily if itâ€™s left in a small pot), and begin to fertilize with the kelp emulsion every two weeks throughout the growing season. Some of the older leaves might yellow and die, but theyâ€™ll quickly be replaced with new foliage.

At the end of the gardening season, youâ€™ll need to start mimicking that natural dry period to initiate bloom. Around late September or early October, move the pot somewhere that is about 55 degrees Fâ€”a garage is greatâ€” and stop watering and fertilizing. The leaves might wither and die during this dormancy. Let the amaryllis sit there for about eight weeks. When this time has passed, repot the bulb with new potting soil, letting the upper third of the bulb remain above the soil surface. The new pot should only be 2 or 3 inches bigger in diameter than the actual bulb.

Bring the repotted plant back to a bright sunny window to allow for root growth and flower development. A new flowering stalk should appear within two or three weeks. Once the flowers begin to open, move the plant back to a cool area out of direct sunlight and start the process again.

Even if you do everything just right, your chances of seeing a bloom are still 50/50. Do it, though, because even if it blooms only every two or three years itâ€™s completely worth it. Amaryllis are simply beautiful.