As hair sheep, American Blackbellies are extremely easy to care for and require no shearing or tail docking. 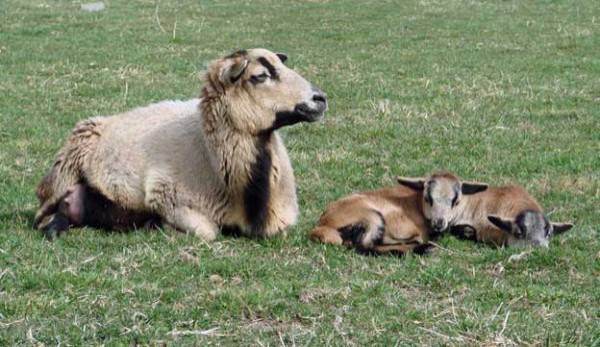 Use: American Blackbelly sheep are extremely easy to care for and require no shearing or tail docking. As a hair sheep breed, they are much more worm-resistant than wool breeds and are often raised without deworming pills or vaccinations. (A veterinarian should be consulted regarding parasite control.) Ewes lamb without assistance and do well on lower-quality forage. For these reasons, theyâ€™re a good choice for new sheep keepers. In addition, rams with outstanding racks of horns are prized by trophy hunters and game ranchers. Primarily a meat sheep, American Blackbellies yield a very lean and mild carcass popular with ethnic and grassfed, all-natural niche markets.

Conformation: Because of the American Blackbelly sheepâ€™s black facial bars and striking black belly and leg markings, itâ€™s one of the most exotic-looking sheep breeds in the U.S. Ewes average 24 to 28 inches tall at the withers; rams average 30 to 32 inches. At maturity, ewes weigh 75 to 95 pounds; rams weigh 110 to 140 pounds. The rams are reknowned for their massive rack of horns, with curls of 30 inches or larger in the more mature sheep. American Blackbelly sheep have a hair (not wool) coat, with the potential in colder climates to grow a wooly undercoat that sheds in the spring. The coat color may vary from light fawn to reddish brown but should have no white on it except for the occasional white tip on the tail. Because of the sheepâ€™s Mouflon ancestry, rams may exhibit a lighter-colored “saddle.”

Special Considerations/Notes: Blackbelly shep are bred year-round, unlike most of the wooled sheep breeds. They are fertile at 4 months and regularly twin. Although they are a slow-growing sheep breed, they lamb twice in 18 months at times of the year that correspond to market demands for lamb meat.

American Blackbelly sheep are relatively inexpensive, and shepherd’s costs will be minimal because the breed doesnâ€™t require shearing or high-quality forage. The sheep can be a challenge to handle because they startle easily and jump like deer. With gentle and patient handling, theyâ€™ll quickly become accustomed to the farm’s routine.