The history of this mainly riding horse began with the birth of colt with a pure white coat, though the colors vary today. 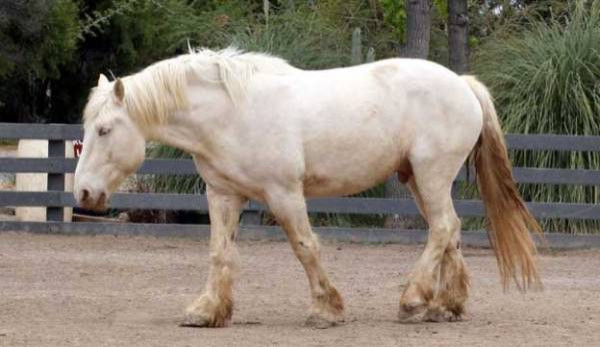 History: The history of the American White and Cream horses begins in 1908, with the birth of a white colt that would eventually come to be known as Old King. Possessing a pure white coat, pink skin and brown eyes, the young horse captured the attention of brothers Caleb R. and Hudson B. Thompson of West Point, Nebraska, who purchased the stallion in 1917 with the intent of creating a special breed of white horse. The Thompson brothers bred several dark-colored Morgan and mixed Morgan mares to Old King. Half of the foals born to these mares were pure white, just like their sire. Years later, when Hudson left the partnership, Caleb and his new wife Ruth continued breeding these horses and dubbed their new breed â€śthe American Albino Horse.â€ť Creating something called the White Horse Troupe, the Thompsons began traveling around the United States and Canada with a group of white horses. Trained to perform a variety of circus-types acts, the horses wowed spectators with their eye-catching color and incredible talent for unusual feats, including Roman riding, hurdle jumping with a standing rider, jumping over cars and even high school dressage. The Thompsons also gained notoriety for their white breed by sharing the stage with celebrities like Gene Autry and Minnie Pearl. One particular white horse gained fame by being purchased by a prince from India. Another became well known by being ridden by Admiral Haley in a World War II Victory Parade in New York City. And one horse went on to become an animal actor, starring in the film â€śThunderhead.â€ť A few years earlier, the Thompsons had started the American Albino Horse Club to serve as a registry for Old Kingâ€™s progeny. In time, the registry was opened to all true white horses with pink skin and brown, black, hazel or blue eyes, regardless of breed or bloodlines. In the 1980s, horses with light cream coloring and pink skin, known as American Creams, were added to the registry. Over the years, the registry has changed names and moved from Nebraska to Oregon and back to Nebraska again. Today, the official registry for white and cream horses is the American White & American Cream Horse Registry, and is open to horses of all types and parentage, including draft breeds and ponies, as long as they meet the registryâ€™s color requirements.

Special Considerations/Notes: The pink skin of American White and Cream Horses is prone to sunburn, especially on the nose. This area should be protected with sunscreen or a fly mask that blocks UV rays.