Often described as an "ornamental" sheep, the Jacob sheep can be raised for wool and lean, grass-fed meat. 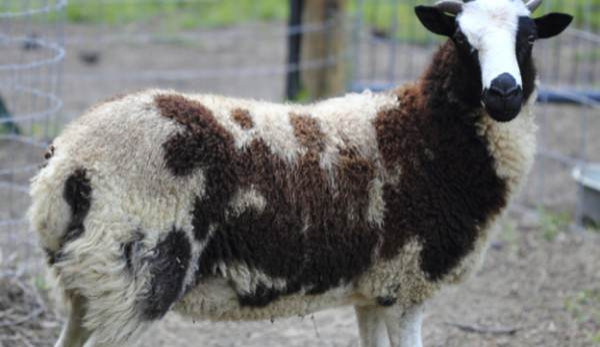 Use: Still popular as exotic-looking pasture ornaments, Jacobs also delight fiber artists with their black and white wool that can be mingled and spun into beautiful variegated yarn. Wool quality and fineness vary between individual sheep, but in general this breed has undergone selection to produce a medium 3 to 6 pound fleece with a staple length of 3 to 7 inches, a spinning count of 44 to 56, and a light, open handle. Despite their relatively small size, Jacobs also efficiently produce a lean, flavorful meat while foraging on pasture with little supplemental grain.

History: The Jacob sheep acquired its name from the Old Testament story of Jacob, who selectively bred spotted sheep, but no one knows for sure where this ancient breed originated before it was documented during the 1600s in England. Spotted, or piebald, sheep had been described in the Middle East and Mediterranean regions, and in Asia. Primarily kept as ornamental āparkā sheep in Britain, Jacobs came to North America during the mid-1900s. The two lines ultimately diverged as British breeders selected for larger, more uniform sheep and American breeders attempted to keep the breedās primitive conformation intact while improving fleece quality. The American Livestock Breeds Conservancy lists this breed as rare on its Conservation Priority List.

Conformation: From a distance, many people mistake these primitive sheep for goats because of their slender build, horns and eye-catching black-spotted white fleeces. As a polycerate or āmulti-hornedā breed, Jacob rams and ewes can sport anywhere from two to six horns. Ewes weigh around 80 to 120 pounds; rams, 120 to 180 pounds.

Special Considerations/Notes: Jacob sheep tend to act more goat-like than other sheep. They have a poor flocking instinct and a fondness for browsing brush as well as grazing. Hardy and adaptable, Jacobs tend to be resistant to disease and parasites, and can weather both hot and cold climates. The ewes have few lambing problems and make protective mothers, even using their horns to ward off predators on occasion.