One of the mounts used by Civil War soldiers, Morgans are an ideal horse for showing, drill teams and even police horses. 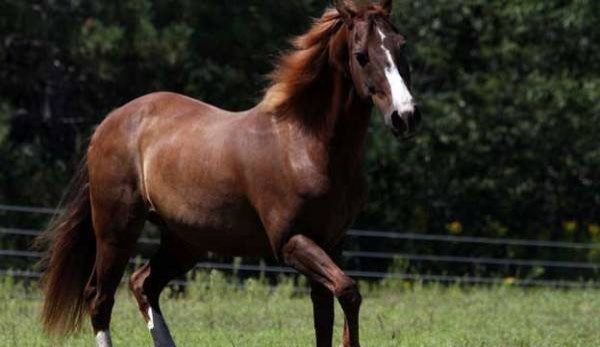 Use: Morgans are used in just about every discipline, including western show, saddle seat events, hunters, jumpers, dressage, eventing, driving and competitive trail riding. They also appear often in parades and drill teams, and are found in many police horse stables.

History: The Morgan horse breed originated in Vermont during the late 1700s with a stallion named Figure. Only 14 hands tall, the small bay horse, believed to have been of Dutch, Thoroughbred and Arabian breeding, became famous for his ability to pull heavy loads and win races. As the horseâ€™s notoriety spread, mare owners brought their horses to him for breeding. Figure, who became known as Justin Morgan, after the man who owned him–was adept at passing along his characteristics to his foals. The resulting horses became known as Morgans. Morgans played a part in early U.S. history, serving as mounts during the Civil War. A number of cavalry regiments were mounted exclusively on Morgans, who were chosen because of their steady dispositions, hardy constitutions and endurance. At the time of westward expansion, Morgans found their way into cavalry units and soon were bred as remounts by the U.S. government. Morgans were also bred in the West to work cattle, and contributed to the development of the Quarter Horse breed. In 1907, the U.S. government responded to the drastic reduction in the numbers of horses being born since the introduction of the automobile. Congress acted to help preserve the Morgan, considered the ultimate cavalry horse. A government breeding program actively began when a Morgan breeder named Joseph Battell donated a 400-acre farm near Weybridge, Vermont, to the U.S. government. The farm was to be used as headquarters for the governmentâ€™s Morgan breeding program. Eventually, hundreds of Morgan horses were produced at the farm, which is now part of the University of Vermont. In 1909, the Morgan Horse Club was formed in at the Vermont State Fair. In 1971, the organization changed its name to the Morgan Horse Association. Today, the association registers Morgan horses around the world.

Conformation: Morgans stand between 14.1 and 15.2 hands in height and come in just about any solid horse color, including black, bay, chestnut, grey, buckskin, dun, perlino, cremello, and palomino. Pintos are also seen in the breed. The Morganâ€™s body is compact yet powerful, with a short back and a long croup. The neck springs from a steeply angled shoulder, is slightly arched and crested, thick at the base and blended with the withers. The ideal Morgan has picture-perfect balance, with a high-set tail.