The elegant Saddlebred, used mainly as a show horse, has a long interesting history in America. 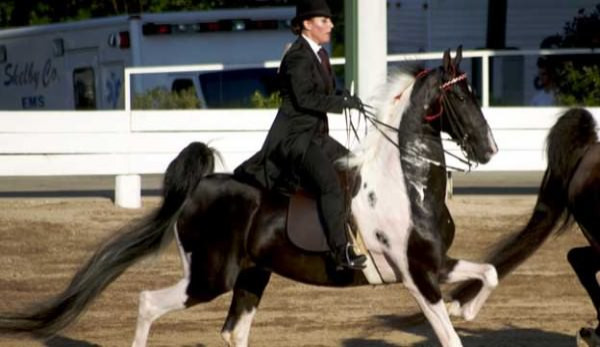 History: The Saddlebred breed began with the development of the Narragansett Pacer, created in the Narragansett region of Rhode Island. British colonists in the New World used Galloway and Hobbie horses from the British Isles to develop this pacing horse, which possessed a smooth riding gait. By the early 1700s, Thoroughbreds were being crossed with Pacers to get a bigger, more versatile horse. Called the American Horse, it inherited an ambling gait from the Narragansett Pacer. Because the American Horse was such an excellent riding mount, colonists used it during the American Revolution and into the early part of the next century. A new breed descended from the American Horse called the Kentucky Saddler, which also had Morgan, Canadian Pacer and Hackney blood. By the mid-1800s, the Kentucky Saddler had come to be called the Saddlebred, and was one of the most popular breeds in the East. When the Civil War began in 1861, these horses carried soldiers and generals into the fighting. Both General Ulysses S. Grant and General Robert E. Lee owned Saddlebreds. The breedâ€™s involvement in the war was of great importance, both during and after the conflict. Historians believe the Saddlebred was valuable in helping the South recover from the war. In the 1890s, a group of breeders organized to â€ścollect, record and preserveâ€ť the pedigrees of the American Saddlebred. In 1891, the National Saddlebred Horse Breeders Association was formed in the South, later to be called the American Saddlebred Horse Association. In the days before the Industrial Revolution, the Saddlebred Horse served several purposes. He was a saddle horse mostly, used to comfortably carry his rider from place to place. He could also work as an elegant carriage horse, pulling rigs with style, grace and speed. With the advent of the automobile in the early 1900s, the Saddlebred became mostly a show horse, a job he still excels at today.

Conformation: The Saddlebred has an elegant and refined appearance. Standing anywhere from 15 to 17 hands in height, these horses have large, wide-set eyes and gracefully shaped ears set close together. The neck is long with a fine, arched and well-flexed at the poll. The breed has well-defined and prominent withers, while the shoulders are deep and sloping. A strong level back also characterizes the breed. Saddlebreds come in palomino, chestnut, bay, black, gray, brown, and even spotted (pinto). Saddlebreds are born with three gaits and some go on to be trained to have five. In addition to the walk, trot and canter, five-gaited Saddlebreds also know how to slow gait and to rack.