American water buffalo are mixtures of riverine and swamp buffalo that serve their owners well as oxen, as well as milk producers for highly esteemed dairy products. 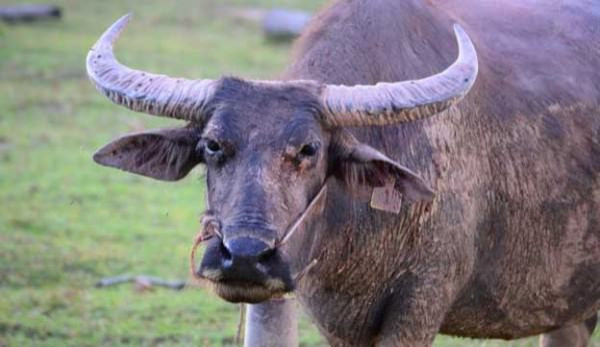 Use: Water buffalo are to Asia as bison were to the American plains Indians. For millennia, water buffalo provided draft power, milk, meat, hides, horn, and fuel in parts of Asia where no other sources existed. They are still an integral part of South Asian life. Riverine water buffalo also contribute up to 15 percent of the world’s milk supply. Buffalo milk is high in milk solids and averages eight percent butterfat, making it an ideal medium for making soft cheeses, butter, and yogurt. Most of the ghee (clarified butter) sold in India is made from buffalo milk, as is much of the gourmet mozzarella cheese crafted in Italian dairies (the United States imports 90,000 pounds of mozzarella di bufala every year). Lean, tasty, water buffalo meat contains less than one-fourth the amount of fat and half of the cholesterol of beef. Cooked, it closely resembles (and tastes like) lightly marbled beef. Ranchers in Trinidad developed a beef-type water buffalo called the buffalypso that is now available in the United States. And, due to their intelligence and placid natures, water buffalo are easily trained to ride or as working oxen.

History: Water buffalo (Bubalus bubalus) were domesticated in the Indus Valley of India and Pakistan at least 5000 years ago. Their ancestor, the critically endangered Asian Wild Water Buffalo (Bubalus arnee), still survives in limited numbers in India, Nepal, Bhutan, and Thailand. Early on the domesticated water buffalo separated into two types: swamp buffalo (the working water buffalo associated with China and Southeast Asia) and river or riverine buffalo (further developed in India and Pakistan for milk production). Water buffalo arrived in North Africa and the Near East as early as 600 A.D. They came to Europe with Crusaders returning from the Middle East. They were introduced to Australia in the early 18th century, where escapees quickly naturalized and where large feral populations still exist. The University of Florida, in an attempt to develop an organic approach to aquatic weed control, imported five buffalo in 1975. Their success led to an article in the December 1976 issue of Smithsonian magazine that in turn inspired Lake Charles, Louisiana businessman, A.P. Leonard, to import 103 riverine buffalo from Trinidad and 78 swamp buffalo from Guam. Experimental herds were ultimately established at the University of Florida and at Berry College in Georgia. The American Water Buffalo Association was formed in 1986 and there are now an estimated 4000 water buffalo in the United States.

Conformation: Swamp buffalo are the living tractors of China and Southeast Asia. Most are brownish-gray with lighter-colored legs and a pair of light-colored chevron markings on their chests. They are massively built with strong bodies and short legs ending in large hooves that enable them to navigate Asia’s flooded padi rice fields with ease. Their horns are triangular in cross-section and sweep back from their forehead in a wide crescent that can easily measure five or more feet from tip to tip. Riverine buffalo are combination draft and dairy animals. They can be brown but are usually black; white markings on the tail switch, legs, or forehead are common. They are taller, more angular, and have longer legs than swamp buffalo. Their horns sweep back, then up and in, frequently terminating in spiral curls. While swamp buffalo have 48 chromosomes and riverine buffalo 50 chromosomes, their genetic material is very similar and the two types are inter-fertile. Many North American water buffalo are mixtures of the two, as are the meaty buffalypso of Trinidad. They cannot, however, hybridize with genus Bos species such as domestic cattle, yaks, or bison, all of which have 60 chromosomes, nor are they closely related to bison (erroneously called American buffalo) or the Cape buffalo of Africa. Depending on type and breed, adult buffalo average 46-60 inches tall (measured at the withers) and weigh between 800 and 2000 pounds. They have one-tenth the number of sweat glands of domestic cattle and correspondingly sparse hair coat. They’re born with all the hair follicles they’ll ever have, so calves have relatively lush coats while adults have very little hair.

Special Considerations/Notes: Water buffalo are not exotics and thus not regulated as such. Fences that hold domestic cattle work for water buffalo. They thrive on marginal pasture with rough browse and consume a fraction of the feed required to raise cattle. Calving problems are virtually nil; cows display strong mothering instincts. They’re intelligent, long-lived, and cows frequently calve into their 20’s. With few exceptions, water buffalo are uncommonly easygoing and they thrive on attention. It’s easy to train buffalo to ride. Swamp buffalo are perfectly adapted to our Southeastern states. With winter protection, riverine buffalo can thrive anywhere in the United States. In hot, humid climates they prefer to wallow in water to cool down but hosing them with cool water twice a day is usually sufficient.