An Abundance of Borage (Starflower)

Borage spontaneously grows in nearly every corner of everyone's yard. It's a great substitute (or addition) to your usual steamed greens. 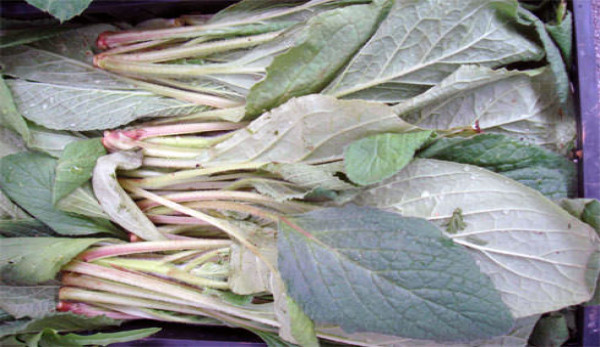 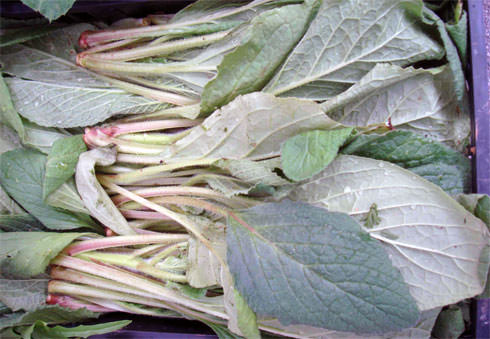 Whenever Iâ€™ve written about borage, Iâ€™ve always included a photograph of the clusters of charming little blue, star-shaped flowers. Todayâ€™s photo shows a drab carton of borage leaf bundles, which is the more common form of borage here in Liguria, Italy. Everybody who has a piece of land probably has their own spontaneously grown borage crop, but everybody else buys these bundles of young leaves at the market.

Borage also seeds easily, so I often see growers who have grown a row or two of borage in their garden spaces. I suppose one of these days Iâ€™ll seed some too, if I can figure out an appropriate spot to do so. As it is now, there are a lot of volunteers, which are actually a problem because they seem to sprout frequently in the various pathways and stairs of the garden, so I need to cut out dozens of nice plants each year just to keep the pathways open.

The growth of the plants is fairly variable, as sometimes-stunted, little plants will bloom enthusiastically from a corner in the steps; other times, a monster with a 2-inch-thick trunk and a crown of bright-blue flower clusters will plant itself in the middle of a fertile patch, growing higher than 3 feet tall. The new sprouts show up both in fall and then again in spring. Cultivation of the vegetable beds brings up new seeds, and the plants show up in any other area of the garden that they fancy.

Iâ€™ve seen borage growing just about everywhere except Hawaii; it can become a weed in California. Iâ€™ve not seen it in person, but Iâ€™m sure borage could make itself at home in Virginia.

Growers who raise borage for the market grow big plants and cut the new leaves often. There are always quantities of new sprouts around in the high season, so the leaf bundles usually include some whole, uprooted, young, three-leaved plants.

We prepare borage mostly as a steamed green, sometimes by itself and sometimes in a mix of various greens. For some holidays, my wife and mother-in-law might make raviolis filled with a borage mixture. During winter, we often throw a handful of borage leaves into soup mixes.

I like making deluxe bundles of leaves and giving those to family and neighbors. This season, weâ€™re harvesting borage and black kale, which serve a very similar role as a general winter, green-leafy vegetable. In general, my neighbors from the north are the bigger borage eaters, while those from the south are more likely to prefer black kale.

Iâ€™d never grown borage before I moved to Italy, and had the mistaken notion that borage was an herb. Some people do use it as a dried herb, and some growers grow crops from which seed oil is obtained, but Iâ€™m pretty certain fresh consumption as a leafy vegetable is the most common method of using this plant.