An Antique Woodbox Connects Me to My Farm’s Past

Some 50 years after leaving the farm where it was built, an antique woodbox with a special construction style finally returns home. 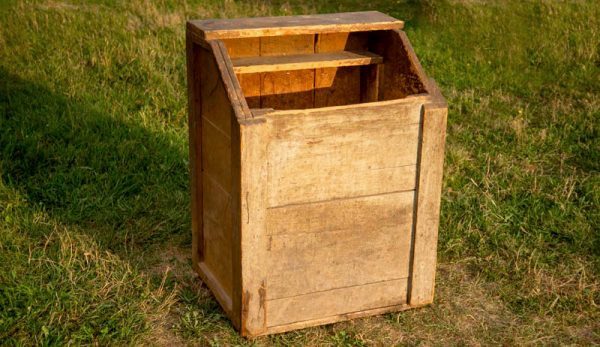 One hundred years. Ten decades. One century. It seems like such a long time, and yet, 2019 marks the 100th birthday of our farm, first settled all those years ago in 1919.¬†Only two families have ever lived on this farm, which makes it particularly special. Because of this, I feel like I can truly appreciate and learn the history of the buildings, the land, the property. And delightfully, in the year of this special anniversary, we received a special gift.

The gift was an old woodbox‚ÄĒa box for storing firewood‚ÄĒbuilt by the previous owners of our farm. Long ago, the woodbox belonged to a woman named Victoria, who settled the farm with her husband and children. When Victoria passed away some 50 years ago, the woodbox was given to a family friend, who in turn passed it on to her daughter.

Coincidentally, the daughter is an old friend of our family. She and her family used the woodbox for years as a general storage box. Eventually they decided to part ways with the woodbox and sell it.

Naturally, we expressed an interest in buying the woodbox, and recognizing the sentimental value it had for us, they generously gave the woodbox to us as a gift. We were grateful and excitedly brought it home to our farm, reuniting the woodbox with its place of origin after half a century.

It‚Äôs fascinating to examine the woodbox while contemplating its long history. It‚Äôs obvious from the construction style that it was built here on the farm‚ÄĒit‚Äôs made of wide wooden planks, nailed together in a simple yet sturdy design with just a bit of craftsmanship (beveled cuts) to increase its visual appeal. In places, the nails are too long, so the sharp points were bent over and pounded flush into the wood, a signature construction technique found on outbuilding doorways throughout our farm.

Looking at the weathered woodbox with its instantly recognizable construction style, I can‚Äôt help but ponder the stories it would tell if only it could speak. How many hard days of farming it must have witnessed, how many winters it must have served, holding wood for the woodstove. What year was it built? Was it made out of lumber sourced from the farm?

It‚Äôs fun to find another connection to the history of our farm. The woodbox belongs in a special category. There’s also ‚ÄúLittle Mo,‚ÄĚ our John Deere Model 40 that has faithfully served both eras of the farm, as well as the roses planted by Victoria so many years ago. They still bloom each summer along the driveway.

Suffice to say, we plan to put the woodbox back into use very soon. We might not use it to hold wood, but rather perhaps for some decorative purpose instead. It‚Äôs earned a life of leisure on the farm where its life began so many years ago.