Photo courtesy of www.breakingthroughconcrete.com Breaking Through Concrete shows the diversity of urban agriculture throughout the U.S. When David Hanson and Edwin Marty realized that most of their recent conversations revolved around the popularity of urban farms, the pair decided the trend was worth writing about. “We decided to put together a book proposal to take […] 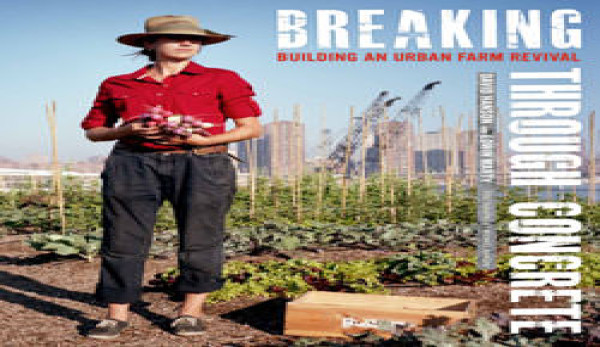 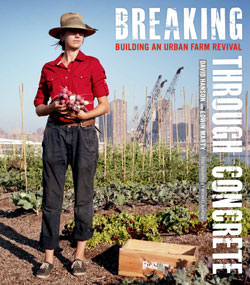 Breaking Through Concrete shows the diversity of urban agriculture throughout the U.S.

When David Hanson and Edwin Marty realized that most of their recent conversations revolved around the popularity of urban farms, the pair decided the trend was worth writing about.

“We decided to put together a book proposal to take a broad look at urban farming in America,” says Hanson. “It was something we wanted to do ASAP because it was a fresh trend.”

A few months after sending out the proposal, University of California Press agreed to publish their book, Breaking Through Concrete: Stories from the American Urban Farm.

As soon as the contract was signed, Hanson, a Seattle-based freelance journalist, and Marty, founder of Jones Valley Urban Farm in Birmingham, Ala., began planning their research.

“It was an experiential project, not something that could be done from behind the computer,” Hanson says.

In 2010, the pair set out on a road trip to document the urban farm movement in America. They crisscrossed the country in a grease-powered bus with award-winning photographer Michael Hanson and documentary filmmaker Charlie Hoxie. Their research was funded by a grant from WhyHunger, a New York-based nonprofit organization that supports efforts to end hunger around the world.

Their tour started in Seattle in May 2010. Over the course of two months, they stopped in 18 cities, including Santa Cruz, Calif., Clarksdale, Miss., Birmingham, Ala. Washington, D.C., Philadelphia, Pa., Cleveland, Ohio and Detroit, Mich., to talk with urban farmers about their work.

“We worried going in [to the project] that all of the farms would look the same and have the same mission,” recalls Hanson. “However, they all had a distinct approach and methodology, and that allowed us to take a really diverse look at urban farming.”

In writing Breaking Through Concrete, which is due out this fall, Hanson and Marty wanted to document the urban farming movement while inspiring the connection between people, place and food.

When choosing farms to profile, the team wanted to recognize farmers who were not only growing food but also providing services to their communities through farming.

Breaking Through Concrete pays tribute to the urban farmers who are leading an environmental and social movement that transforms the national food system. The book includes details about the urban farming movement in America, along with practical advice for new farmers on topics such as composting, keeping livestock, petitioning to change zoning laws and decontaminating toxic soil.

At the heart of the book are 14 profiles of urban farms across the nation. The profiles range from an urban farm at an alternative school in Detroit and a restaurant supply garden on a rooftop in Brooklyn, N.Y., to a backyard food swap in New Orleans, La., and a garden project for the homeless in Santa Cruz, Calif.

According to Hanson, the goal was to show that urban farming “is not just a West Coast, blue-state thing.

“We wanted to celebrate urban farming and paint an honest picture of how it shows up in communities,” he says. “We see [the book] as a benchmark for where we are right now in this country with urban farming.”

More information on Breaking Through Concrete can be found here.

Jodi Helmer is the author of The Green Year: 365 Small Things You Can Do to Make a Big Difference.