Jacobs Heritage Farm is the place to find exceptional honey, eggs, meat and more, with a nod to times and places gone by. 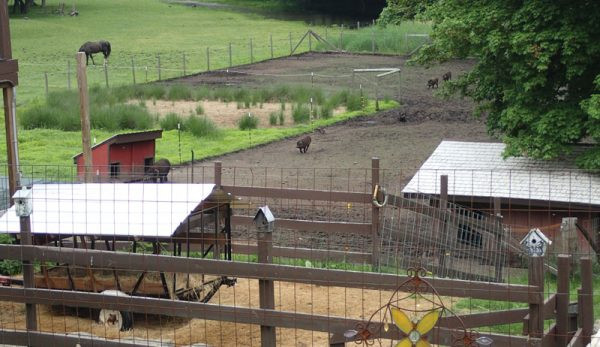 The family farm represents more than just a place for some. It‚Äôs a heritage and passion that calls to those connected to it. Such a passion drives Jason and Jennifer LittleBear to breathe life back into the farm that gave Jennifer‚Äôs great-grandparents a new home a century ago.

‚ÄúIt‚Äôs genetic,‚Äù she says. ‚ÄúI always used to love the farm stories. My family has been farming the same way for a thousand years. It feels more natural to me to be on the farm.‚Äù

The house and the barn were built in 1859, and her great-grandparents, Frank and Agnes Jacobs, bought the place when they emigrated to Copley, Ohio, from Hungary in 1919, at a time when many Eastern Europeans were looking for more promising lives after World War I. They grew what they knew, primarily cucumbers and Hungarian medium-hot block peppers, a staple in the region‚Äôs large Hungarian community.

‚ÄúThey farmed like they did in the old country,‚Äù Jennifer says. Beyond what they sold, they were self-sufficient and raised whatever else they needed, including bees and chickens.

Her maternal grandparents continued farming, although it changed when her grandfather went to work for the Firestone Tire and Rubber Co. in Akron, as did many in the regional population. ‚ÄúMy grandmother did a lot of the farm work since he was working,‚Äù Jennifer says. ‚ÄúShe was here all the time.‚Äù

Jennifer‚Äôs mother had no desire to farm the land, instead working at Akron City Hospital while Jennifer‚Äôs father worked for AT&T, but they built a house on the land next to the farmhouse to raise their family. ‚ÄúI grew up between the two houses,‚Äù Jennifer says.

Her grandmother watched her when her mother worked, so the farm was in her blood from the beginning. But, as with so many family farms in the 1970s and ‚Äô80s, their viability was in jeopardy because of the changing agricultural climate. The country was experiencing the most significant downturn since the Great Depression due to government policies, along with a climate that favored larger corporate farms instead of the family-run operations. It was tough to make a living on 20 or 30 acres, unlike at the turn of the century, and many of that generation opted to step out of agriculture.

To do something else with the land, her uncle parceled off 22 acres in 1980 to create a golf course. ‚ÄúHe ran it for 30 years, by himself, until he was in his 80s,‚Äù she says. At first this seemed like a loss to the farm, yet it ended up being beneficial. Besides keeping the property in the family, it helped keep the land from real-estate developers.

After her grandmother passed away in 1996, the original farmhouse sat empty for a couple of years. Jennifer moved into it in 1998 while attending college. ‚ÄúIt made the most sense for someone to live there,‚Äù she says. Since then, she has gradually restored the farm and made it part of the community once again.

During the past decade, Jennifer and Jason have worked hard to preserve what was there. Eight years ago, they hired professionals to jack up the house and replace the foundation, which was quickly, and visibly, failing. They have continued to take on new projects, resurrecting the farm in a way that focuses on the style of older generations. Now, their self-serve heritage farm stand is a fixture in the community. Many people know it‚Äôs the place to go for real food with a nod to the old world.

Large and small livestock have long been a fixture in Eastern European farm life. Animals such as quail, rabbit and pigeon were typical in the Hungarian food heritage, and continuing the practice appeals to Jennifer. She raises the Coturnix quail, a heritage breed, to sell the dainty and delicious eggs. ‚ÄúThey are huge in protein and vitamin B, and they have more yolk per egg,‚Äù she says. ‚ÄúPlus, you can make the cutest appetizers with them.‚Äù

Jennifer and Jason also raise meat chickens; customers preorder birds because of the high demand. Jennifer leans towards Freedom Rangers, a breed based on a French heritage chicken, because they are hardier and can be pastured, as opposed to the standard Cornish Cross that simply eats constantly and gains weight rapidly. Freedom Rangers take a little longer, nine to 11 weeks instead of eight, but the flavor and meat texture is worth it. “They taste like the chicken our grandparents would remember,” she says.

Jennifer also raises Muscovy ducks, and she brought back the tradition of the Christmas goose for her customers. From songs and stories, we can tell the goose was a favorite centerpiece in the holiday feast, but for some reason it fell out of favor after World War II. Jennifer speculates the decline started with her parents‚Äô generation when white bread, white sugar and expediency in the kitchen were in vogue.

People don‚Äôt know what they‚Äôre missing. ‚ÄúIt‚Äôs a lot more tender,‚Äù Jennifer says of the meat. ‚ÄúIt‚Äôs all dark meat,‚Äù she says. And the fat, which is surprisingly healthy, is the best for cooking other foods. They start taking orders in November and typically sell out quickly. They butcher just a few days before Christmas so the meat is fresh on customers‚Äô tables. She loves that more people are rediscovering this holiday cuisine.

Honeybees have also long been part of daily Hungarian life. Early in the restoration process, Jennifer set up hives to pollinate trees as well as the gardens of surrounding neighbors. In Eastern Europe, beautiful small buildings called bee houses have long been used to protect the hives. Jason built a traditional-looking house for Jennifer‚Äôs bees.

After reacquiring the golf course property several years ago, Jennifer planted specifically for the bees. She says their farm encompasses roughly 25 acres. ‚ÄúA part of it is in pasture, part of it is a hay field, and we turned about 10 acres of it into a bee preserve,‚Äù she says. 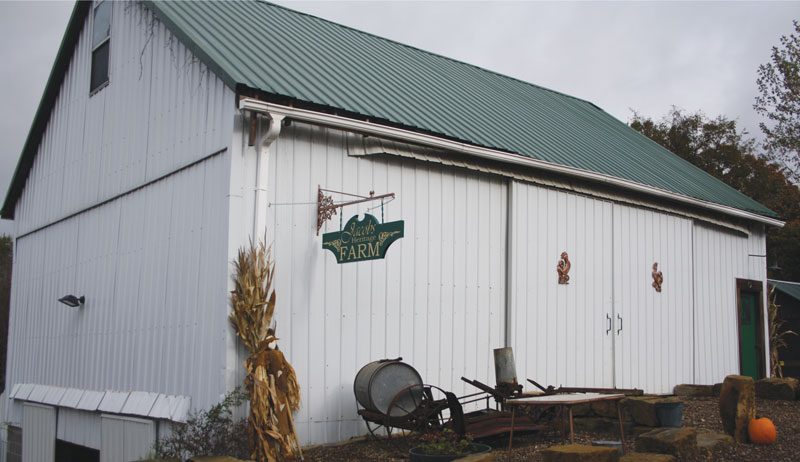 Jennifer worked with the USDA on this project to create a viable nectar source throughout the year. The predominance of monoculture, including the vast number of landscaped yards throughout the country, greatly impact food sources for all pollinators.

‚ÄúIt‚Äôs kind of like a land contract,‚Äù she says. ‚ÄúYou agree to keep it in [the bee preserve] for 10 years, and they give you a little money to cover costs.‚Äù

The USDA also provides a plant list, as the goal is to have something blooming from early in the spring to the final freeze of autumn. Some of the plants include various penstemons, agastache, beebalm, heliopsis, asters and goldenrod. Jennifer recommended others, and she says the USDA quickly approved them.

As part of the project she also started a grove with blackberries and raspberries, and she plans to expand the size and scope of the patch to benefit the bees as well as their customers, who greatly appreciate the variety and abundance.

Beyond the official bee preserve, Jennifer remains conscientious about everything on the farm. The pasture contains a fair amount of clover, and she plants buckwheat, known to make great honey, as a cover crop in the hayfield. The maple trees are also an important piece of the bees‚Äô year as they provide one of the earliest nectar sources. The trees produce exceptional maple syrup and contribute to bee health.

Jennifer also appreciates that the bee preserve goes beyond honeybees. ‚ÄúI can see a benefit for the native bees, too,‚Äù she says. ‚ÄúIt‚Äôs hard for all bees and butterflies. I‚Äôve been trying to cater to the monarchs with some controlled milkweed.‚Äù She works to keep it out of the pasture, as milkweed can be poisonous to range animals, but she still allows it to grow in some areas. ‚ÄúThis year I‚Äôve seen so many monarchs,‚Äù she says. ‚ÄúI‚Äôve never seen so many in my life. They‚Äôre all over the place.‚Äù

The Sheep and the Sows

Another traditional European food is lamb, so one of the first animals Jennifer brought back to the farm was Jacob sheep. At first glance, this heritage breed looks more like a goat than the sheep most of us recognize. With horns‚Äîoften multiple ones‚Äîalong with short, mutlicolored coats and a definite goat-like face, the animal does not resemble a typical sheep. 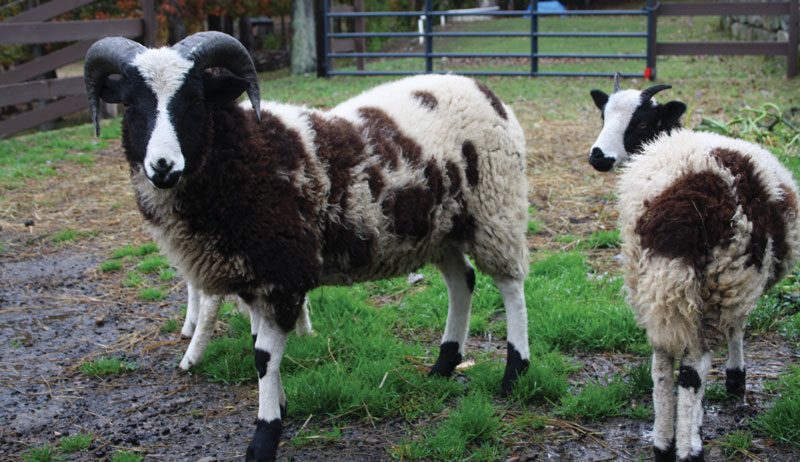 After much research, Jennifer settled on this breed because it is easy to keep; ranges within the pasture, even munching on maple leaves; and is terrific for lambing. The fleece is often sought by hand-spinners because it‚Äôs easy to work with, and the meat is amazing.

A new addition to the old world lineup is the Hungarian Mangalitsa pig. This breed, once the standard pig raised in Hungary, nearly disappeared by the 1990s, partly because of its notoriously high fat content‚Äîroughly 70 percent of each animal‚Äôs bodyweight. Being the pig of lard does not bode well when people seek to reduce fat in their diets. Fortunately, culinary trends change, and the pig made a resurgence, not only in Hungary but throughout the local community. 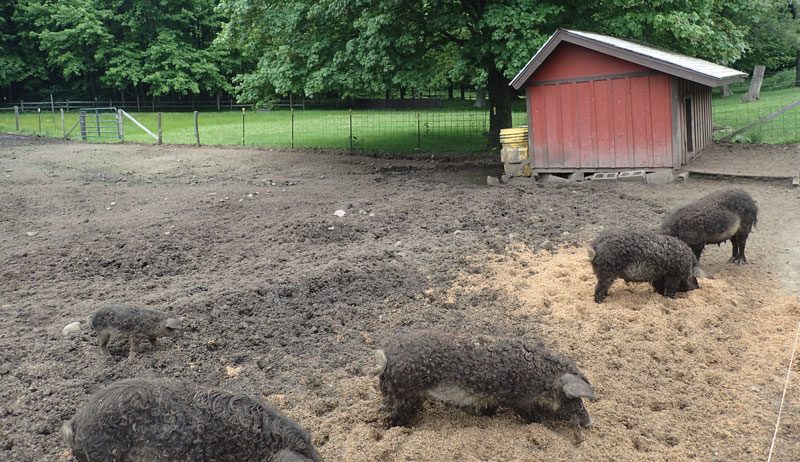 Curly haired, cute and boasting a doglike personality, Hungarian Mangalitsa pigs are top-rate foragers that do well in the pasture, although they don‚Äôt mature as quickly as the conventional breeds. ‚ÄúIt takes about three times longer, about 1-2 years [to reach weight], than a standard pig,‚Äù she says. ‚ÄúHanging weight is typically 150 to 200 pounds.‚Äù

Many prefer Mangalitsa pork over the standard, dry white pork chop found in supermarkets. Meat from the heritage breed is often turned into sausage because of its high fat content, but Jennifer loves every bit of this heritage pig. ‚ÄúThe fat just melts in your mouth,‚Äù she says. ‚ÄúEvery part of it is so much better. But my favorite is the pork chop.‚Äù

Jennifer started with 13 piglets in the spring, and while most are sold to other farmers, she retained several so she is sure to keep her family in those delicious pork chops.

Finding their place in the community has taken a while, but Jacobs Heritage Farm is now known as the place to find exceptional honey, fresh eggs, tasty meat, new and dried flowers, homemade preserves and soaps, and products from other local farms.

To take the couple‚Äôs passion for community a step further, Jason recently tackled the enormous project of turning an old, vacant pizza parlor (with all the food and equipment still in it) into a coffee house. This will be an extension of what they offer at the farm stand, as well as a way to work with other local farms.

‚ÄúThere‚Äôs a lot of small farms that make really neat stuff,‚Äù Jennifer says. ‚ÄúI think farmers should work together as much as they can.‚Äù

What‚Äôs more, Jennifer and Jason know their hard work allows this generation to enjoy the best of old world tradition.