Rapallo has many of the ancient shrub Pittosporum tobira. These shrubs, which are actually small trees, are really attractive year-round, particularly in spring when they bloom. 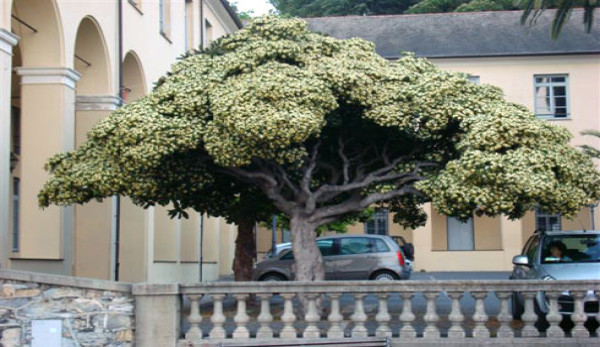 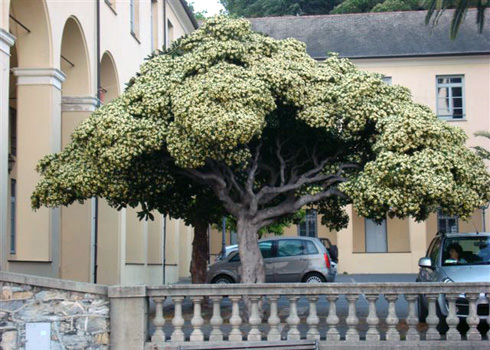 Pittosporum tobiras, shrub-like tree that were likely planted here in the 1920s, blanket the city of Rappallo.

Rapallo has many of the ancient shrub Pittosporum tobira. These shrubs, which are actually small trees, are really attractive year-round, particularly in spring when they bloom. From the conversations Iâ€™ve had with the city gardeners, I think a lot of these pittosporums were planted in the 1920s. A number of them are easily more than 25 feet tall.

The trees/shrubs are exceptionally self-cleaning. Without any particular pruning, they form themselves into tidy lumpy lollipop shapes. When they bloom, the abundant flowers are spaced perfectly around the crown of the plant. They look almost too goodâ€”sort of like fake little trees to plant around a model railroad setup.

Pittosporum tobira is one of the primary staples in the nursery industry in temperate areas, and it certainly makes the list of the 10 most planted landscape shrubs of the 20th century. It was “discoveredâ€ť in China at the end of the 18th century, and the first European-grown specimens were listed in Kew Gardens in London in 1804. It remained mostly a botanical specimen until the end of the 19th century when people in Europe and the United States started to landscape their yards.

Nurseryman quickly noticed the easy propagation and excellent planting results. By the start of the 20th century, Pittosporum tobira was on just about every landscape-nursery growerâ€™s availability list. Itâ€™s a perfect plant from the nurserymanâ€™s point of view because it grows well in containers, has very few pests, is fairly fast-growing, is drought tolerant and blooms easily. By the 1920s, it was one of the most common shrubbery plants in nurseries, and therefore also in home, civic and business landscape plantings.

Over the years, there has been some selection by nurserymen, and the Pittosporum tobiras available for sale today are a bit faster- and straighter-growing than those available in the early 20th century. Fifty-year-old specimens in America, where nursery selection was heaviest for shrubbery, arenâ€™t quite as sensuously curved as the European examples. While European gardeners in the first half of the 20th century planted more perennial flowers and less shrubbery, American gardeners planted huge amounts of shrubbery around their legions of single-family homes.

Â American nurseries were very keen to grow shrubbery plants that looked tall and healthy in their pots. The changes in the late 20th century were also pushed most by American nurserymen who developed several dwarf varieties of Pittosporum tobira, which now sell more than the full-sized type.

Pittosporum tobira is a mild-climate plant, and the colder or hotter the climate, the less likely that the plants will survive to a mature old age. In cold areas, the plants often freeze, and in tropical situations, the plants are subject to a number of pests that donâ€™t occur in temperate zones.

The most common name for the species is Mock Orange because the blooms sort of resemble citrus blooms in appearance and odor. It is also called Australian Laurel, because Australia is where the many cousins in the genus are native. My favorite name, which is used more in the UK and Australia, is Japanese Cheesewood. The freshly cut wood does have a distinctive smell, but itâ€™s not like the smell from the traditional cheese I eat.

Unfortunately, this species can be easily clipped into squared off hedges and green screens, so this is what most gardeners did in the 20th century and the less well informed still do. Only in the past 20 years has the general public come to understand that letting this species take its natural form produces a very attractive plant.