This hardy and vigorous Ancona chicken is a year-round layer of white eggs. 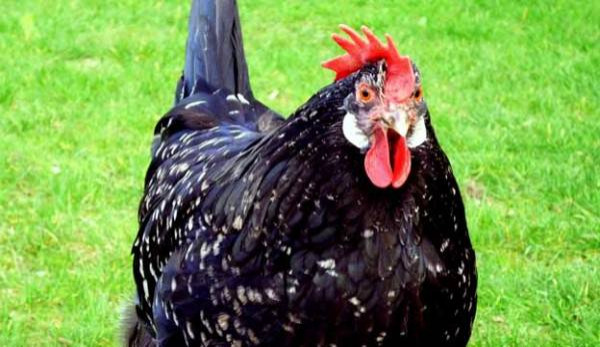 Use: This hardy and vigorous Ancona chicken is a year-round layer of white eggs.

History: This heritage chicken breedâ€™s namesake is Ancona, Italy, where it was bred for centuries before it gained notoriety in England in the late 19th century. Anconas were imported to America in 1888 and 1906 by Francis A. Mortimer of Pottsville, Pa., and H.C. Sheppard of Berea, Ohio, respectively. The chicken breed quickly gained stateside popularity. The American Poultry Associationâ€™s Standard of Perfection first recognized the single-comb Ancona in 1898 and the rose-comb Ancona in 1914.

Conformation: The Anconaâ€™s plumage is mottled and it is similar in size and shape to the Leghorn; because of this, the breed was once referred to as the Mottled Leghorn. The shanks are yellow, the wattles are bright red and the earlobes are white. Anconas have two comb varieties. The single comb is bright red with five points standing upright on males; on females, the first point stands while the remaining four fall to one side. The rose comb is bright red and sits directly in front ending in a spike. Standard Ancona cocks weigh 6 pounds and hens weigh 4Â˝ pounds; bantam cocks weigh 26 ounces and bantam hens weigh 22 ounces.

Special Considerations/Notes: The Ancona is a striking chicken breed, but because itâ€™s a quick mover, youâ€™ll likely have to admire it from afar. The breed thrives in a free-range environment and is great at foraging. Laying begins around 5 months and continues year-round. The dark plumage helps hide the Ancona from predators. The Ancona is listed in the Watch category of the American Livestock Breeds Conservancyâ€™s Conservation Priority List.