And A Pruner In A Pear Tree

The day after loads of Christmas feasting is dedicated to pruning back fruit trees. (It’s important to burn off those calories, after all.) 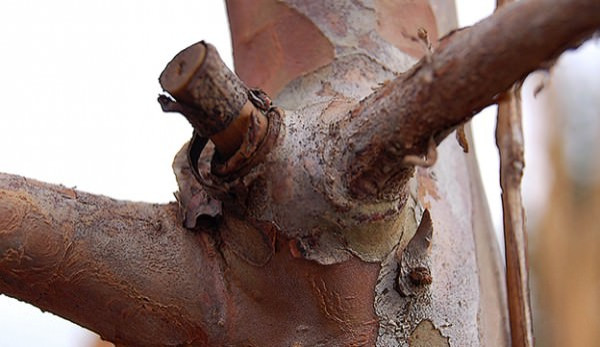 Today’s Christmas and a no-farming day for me. Instead, I’m whipping up a side of beef, a mountain of mashed potatoes, a lake of creamed spinach and a bushel of muffin-sized Yorkshire puddings. Oh, and a steamed persimmon pudding with perhaps the tiniest bit of rum syrup. There’s sure to be a table full of appetizers brought by our guests and heaps of other desserts, as well. It’s clear that after I wake from my food coma tomorrow, I’ve got some serious work to do to lose those extra calories. And I’ve got the perfect solution … pruning!

I can burn a lot of calories pruning because we have a lot of trees: two apple, a pear, a green fig and a Santa Rosa plum—all mature. The babies include a persimmon, a five-graft cherry, a black mission fig, a quince and my beloved Cherokee peach, grown from a seed and still living in its pot. While each tree, depending on age and type, definitely has specific requirements when it comes to hacking them up … I mean, pruning … I’m well aware that my knowledge is limited, so I won’t be getting fancy. If I had the extra cashola, I’d have a real pro do it, but it’s up to me until one of those lottery tickets pays off.

I’m going to stick to the basics this time around and hope that the whole “apple tree not producing anything but leaves for a year” issue doesn’t rear its mean little head again. These are the simple steps I’m going to follow:

Basically, you want to aim for a light, open, airy tree shaped like a goblet, aka open in the middle. The idea is to let the sun into the middle of the tree. As a general rule, don’t take more than a third of the growth in any pruning. Shoot for removing at least 20 percent, but not more than 30 percent. I get in there and cut for awhile, then step back and look. This gives me a chance to rest my arms and get a good idea of where I need to cut next. Also perhaps I could have just a small sip of beer and a bite of a sandwich. Pruning is hungry work, my friends.

As I get more experienced, I expect I’ll be able to sort out the difference between fruiting buds and growth buds, and how to manage the specific needs of pomes vs. stones (apple-type fruit vs. stone fruit). If I want to really get crazy, I might take a shot at espaliering, because that’s how I roll. But for now, I’ll just stick to the basics and hope for the best.