The Andalusian chicken is a lean, elegant layer that produces about three large, chalk-white eggs per week. It is an exceptional winter egg producer as well as a good source of breast meat. 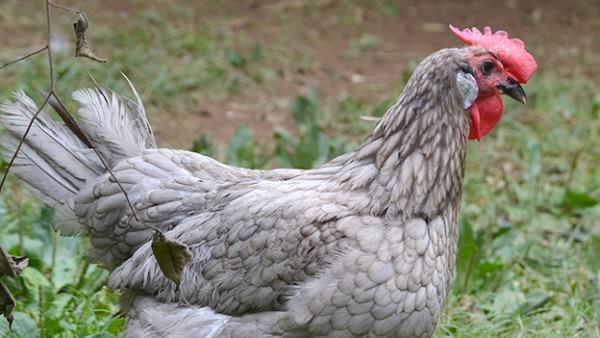 Use: The Andalusian chicken is a lean, elegant layer that produces about three large, chalk-white eggs per week. It is an exceptional winter egg producer as well as a good source of breast meat.

History: Andalusian chickens, also called Blue Andalusians, are natives of Spain’s Adalusia province. The breed was developed by crossing white and black chickens to create a slate-blue variety. Adalusians were imported to England in 1846, and then later into America between 1850 and 1855. The breed was accepted into the American Poultry Association’s Standard of Perfection in 1874.

Conformation: Like other Mediterranean chicken breeds, the Andalusian is symmetrical and compact with a stately carriage. A medium-sized breed, standard Andalusian cocks weigh 7 pounds and hens weigh 5½ pounds. Bantam cocks weigh 28 ounces and hens weigh 24 ounces. The breed has a large, single comb and comes in a single APA-recognized color: Slate-blue feathers laced in glossy black. This variety is achieved by crossing white and black chickens. When two Blue Andalusians are bred, 50 percent of the chicks will be blue, 25 percent will be black and 25 percent will be white or splash (white with blue or black splashes). Off-colored Andalusians cannot be shown at APA shows.

Special Considerations/Notes: Andalusian chickens are superlative foragers, graceful, stately and rugged. They’re noisy, somewhat standoffish and not adaptable to confinement, yet they’re less flighty than most Mediterranean chicken breeds. They’re cold-hardy, but their large, fine-textured combs are prone to frostbite. They’re also wonderfully heat tolerant in the South. Although once quite popular, the Andalusian chicken breed is scarce today and is listed as Threatened on the American Livestock Breeds Conservancy’s Conservation Priority List.